The 5th edition features work by more than 130 artists across nearly 50 of Glasgow's best permanent and temporary exhibition venues. Jeremy Deller presents Sacrilege an interactive public artwork situated on Glasgow Green, the solo exhibition by Wolfgang Tillmans includes an important group of works acquired by the Arts Council Collection, Southbank Centre and an exhibition of new work made by Teresa Margolles during a three-month Production Residency at Glasgow Sculpture Studios. 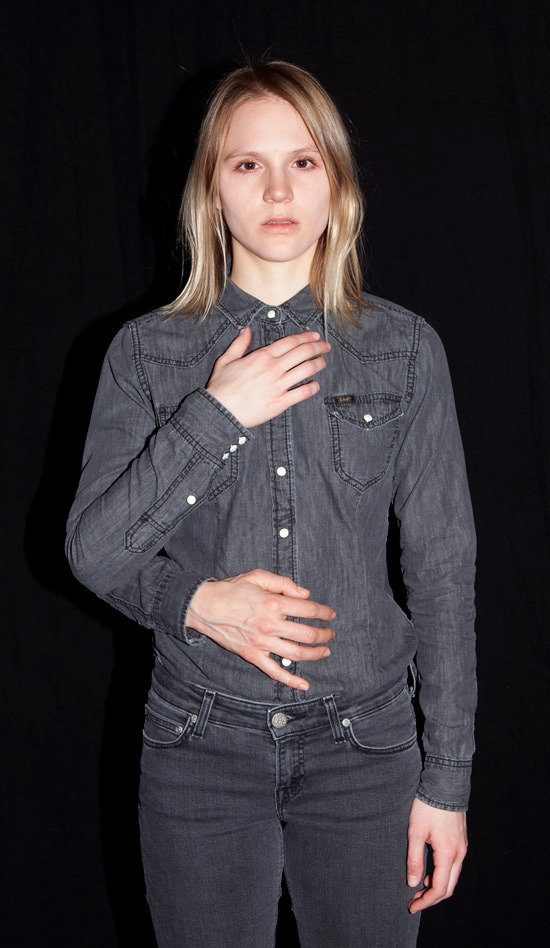 Glasgow International Festival of Visual Art (20 April 2012 – 7 May 2012) today announced further programme details for its 5th edition. Showcasing work by more than 130 artists across nearly 50 of Glasgow’s best permanent and temporary exhibition venues, the Festival will continue its tradition of bringing together exhibitions by the best international and local artists. Directed by Katrina Brown, the 18-day programme will feature a series of newly-commissioned works that draw on a range of disciplines, including visual art, dance, film, music, performance and theatre.

JEREMY DELLER
For GI Festival 2012, Turner Prize winning artist JEREMY DELLER will present Sacrilege, a major new, interactive public artwork to be situated on Glasgow Green. Characteristic of Deller’s on-going exploration of contemporary culture, the ambitious new commission will be his first public project in Scotland with investment from Creative Scotland. Sacrilege has been co-commissioned by GI Festival 2012 in collaboration with the Mayor of London. The work is set to head to London during the 2012 Olympic and Paralympic Games.

On 7 March 2012 Deller will be participating in the PRIMERS series of events which take place in the lead-up to GI Festival. The event will include a special screening of BBC’s Culture Show Special Jeremy Deller: Middle Class Hero followed by a discussion with the artist. Other events in the PRIMERS series include talks by Richard Wright (22 February 2012), a ‘Lives of the Artists’ talk (14 March 2012) and Karla Black (21 March 2012).

WOLFGANG TILLMANS
The Common Guild will present Scotland’s first solo exhibition by WOLFGANG TILLMANS since 1995. The show will include an important group of works acquired by the Arts Council Collection, Southbank Centre. Works featured in the exhibition will be exemplary of the range of Tillmans’ practice which over the past two decades has been thought to have redefined photography. First recognized in the early 1990s for his intensely affecting and unconventional images of friends and other young people in his social circle, he has developed a highly developed style of image making that encompasses a broad range of subjects and includes a powerfully unique presentation. In 2000 he became the first photographer to win the Turner Prize and in 2009 he was awarded the Kulturpreis der Deutschen Gesellschaft für Photographie.

SOLO EXHIBITIONS
Glasgow International Festival of Visual Art will present these two newly announced projects in combination with a stellar line-up of Festival highlights. GI Festival will this year present the largest show to date in Scotland by Glasgow-based 2011 Turner Prize contender Karla Black, who will exhibit a series of new major sculptures in the grand ground floor of the Gallery of Modern Art (GoMA). The Festival will also see the first exhibition of works on paper by Glasgow-based 2009 Turner Prize winner Richard Wright at Kelvingrove Art Gallery and Museum. Another exciting solo show will be an exhibition of new work made by Teresa Margolles during a three-month Production Residency at Glasgow Sculpture Studios (GSS) that coincided with the riots in England.

COLLABORATIVE COMMISSIONS
Highlights of the strong strand of collaborations in the 2012 Festival will include a project by award-winning Scottish artist Graham Fagen, esteemed theatre director Graham Eatough and Scottish director of photograph Michael Mcdonough, which will invite the audience into the place between art installation, promenade theatre and film-making for ‘Making of’, with the National Theatre Scotland, a Creative Scotland Vital Spark project. The Festival will also feature the Scottish premiere of a new performance (co- produced with Chisenhale Gallery, London) by artist, performer and choreographer Alexandra Bachzetsis, who will confront the audience with a series of micro-performances. Los-Angeles based film maker Redmond Entwistle will also premiere a film installation and a new film commission by Glasgow School of Art graduate Rosalind Nashashibi (co-commissioned with Scottish Ballet) in the GI’s hub space.

OWN ART
GI Festival is also delighted to announce the commissioning of four works by Karla Black, Rob Churm, Henry Coombes and Corin Sworn to be produced for sale. This collaboration between GI and Culture Label (www.culturelabel.com) is supported by Own Art and Creative Scotland, the scheme that makes buying contemporary art more affordable.

GI HUB SPACE
For the second time, the Festival is working with Credential Holdings as the official location sponsor to create a dedicated ‘GI Hub’. The Hub will provide a visitor information facility, pop-up shop and will be the venue for Rosalind Nashashibi’s commission.

FURTHER DETAILS
GI Festival will also include over 85 exciting one off events at participating organisations. For further details on these events and the whole programme please visit www.glasgowinternational.org

Katrina Brown, Director, Glasgow International Festival of Visual Art said: “GI Festival will present Glasgow’s increasingly acclaimed art scene at its liveliest and best. This year’s Festival continues our commitment to working with both Glasgow-based and international artists across a diverse range of sites and venues. Creative and inventive in both its form and the content presented within it, this year’s Festival features a strong strand that sees visual art incorporate performance with a very physical engagement.” Councillor Gordon Matheson, Leader of Glasgow City Council and Chair of Glasgow City Marketing Bureau, said: “The Glasgow International Festival has become synonymous with showcasing a wealth of major national and international artists while celebrating Glasgow’s vibrant contemporary visual arts scene and the city’s enviable reputation as a leading exponent of today’s global artistic talent.

Each year, the organisers of this prestigious showcase have built upon the previous festival, ensuring it remains innovative and exciting – and above all else, unique to Glasgow.

Hosting this event in the city not only helps to reinforce Glasgow’s credentials as one of the most exciting centres in Europe for contemporary visual art, it also generates significant local economic benefit and demonstrates our ability to successfully deliver major international festivals and events.”

Councillor George Redmond, Chair of Glasgow Life, said: “Glasgow is Scotland’s cultural powerhouse and GI is now recognised as a global showcase of some of the very best work by local and international artists. This year’s programme will once again prove why the city’s visual arts scene is the envy of the world, producing some of the most eclectic and electric work around.”

Andrew Dixon, Chief Executive, Creative Scotland: “This prestigious new commission reflects the international reputation the GI Festival commands and will be an amazing opportunity to see Jeremy’s work in an iconic city space. GI has a distinct role as a showcase for Scotland’s contemporary art, yet it’s also a magnet for Scottish audiences to enjoy inspirational international work. As Sacrilege travels south from Glasgow’s to be part of the London 2012 Festival, it’s a great example of the connections that are developing between the UK’s creative community. GI promises to be a highlight of the Year of Creative Scotland 2012.”

Paul Bush OBE, Chief Operating Officer at EventScotland, said: “In 2012, the Year of Creative Scotland, GI Festival continues to highlight Glasgow’s reputation within the international arts community, while showcasing some of Scotland’s finest visual artists. Scotland is the perfect stage for cultural events, and the new additions to what is already a fantastic programme, will undoubtedly cement the festival’s ever-growing international stature.”

Annemarie Burns, Project Manager, Scottish Enterprise, said: “Scottish Enterprise is delighted to help announce further details for the Glasgow International Festival of Visual Art. The presentation of work by leading artists such as Jeremy Deller and Wolfgang Tillmans will help ensure the Festival is a key event in Glasgow’s major events calendar. The festival has demonstrated continued growth since its creation in 2005 and it will surely contribute to driving tourism growth while showcasing Glasgow as a key international events venue.”

Taking place every other year, and combining some of the characteristics of a conventional arts ‘biennial’ with a more event- based experience, Glasgow International Festival of Visual Art is a unique event in the international calendar with one of the most groundbreaking and dynamic presentations of contemporary visual arts practice. GI is a unique event that offers both globally recognised and emerging Glasgow-based artists across the spectrum of the city’s art scene a platform to show new work to both national and international audiences while also introducing the work of important international artists. Since its inception in 2005 the Festival has brought together the key organisations in Glasgow’s diverse artistic community, presenting unique events and special commissions rooted in the achievements of the local artistic community, while drawing on important international developments in contemporary art.

In 2010 Susan Philipsz won the Turner Prize for her groundbreaking sound work, Lowlands, which was commissioned by the 2010 Festival.

For more information on the festival, including one off events and primers talks please visit: www.glasgowinterntational.org.

Katrina Brown, Director of Glasgow International Festival of Visual Art is also founding Director of The Common Guild, a visual arts organisation based in Glasgow. From 1997, she was Curator and Deputy Director of Dundee Contemporary Arts. Before working at DCA, she was Exhibitions Curator at Tate Liverpool, Exhibitions Organiser at Tramway, Glasgow and, in the early 1990s, started her career as a committee member at Transmission Gallery, Glasgow. In 2011 she was awarded an honorary degree by the University of Glasgow in recognition of her contribution to the visual arts in Scotland.

Jeremy Deller
Jeremy Deller makes artworks often inviting collaboration and participation. After studying art history at the Coultauld Institute of Art, London and Sussex University, Deller embarked upon an exploration of cultural and political heritage in Britain and its folklore. Using live events and exhibiting the material produced by the production imagery- posters, banners, documentaries, Deller’s work is known for its sincerity, engagement and humour. His work, Procession staged in Manchester involved over 600 participants from community groups across the city parading to an audience of 25,000. In 1997, he worked with the Fairey Brass Band in Stockport on Acid Brass, a performance and recording in which the band played acid house anthems. IN 2001 he made The Battle of Orgreave with Artangel and Channel 4, a re enactment which brought together veteran miners and members of historical societies to restage the 1984 clash between miners that took pace between miners and police at Orgreave, Yorkshire. In 2004 Jeremy won the Turner Prize and recently made It is What it Is, a road trip across the US from New York to Los Angeles towing a car destroyed in a bomb attack in Bagdad. Jeremy Deller will also have a major solo exhibition at London’s Hayward Gallery opening on 22 February 2012.

Wolfgang Tillmans
Wolfgang Tillmans was born in Remscheid, Germany in 1968. He moved to the UK in 1990 to study at Bournemouth and Poole College of Art and Design. For almost two decades he has exhibited internationally, at venues including Tate Britain, London (2003), PS1, New York (2006), Hammer Museum, Los Angeles (2006), Hamburger Bahnhof, Berlin (2008), Stedelijk Museum, Amsterdam (2008) and most recently at the Serpentine Gallery, London (2010). He divides his time between London and Berlin.