End of an Era. The exhibited photographs and installations reflect the ambivalent role of photography on one hand as a documentary medium used to depict reality and on the other as an artistic instrument for the creation of new, dream-like imaginary worlds. 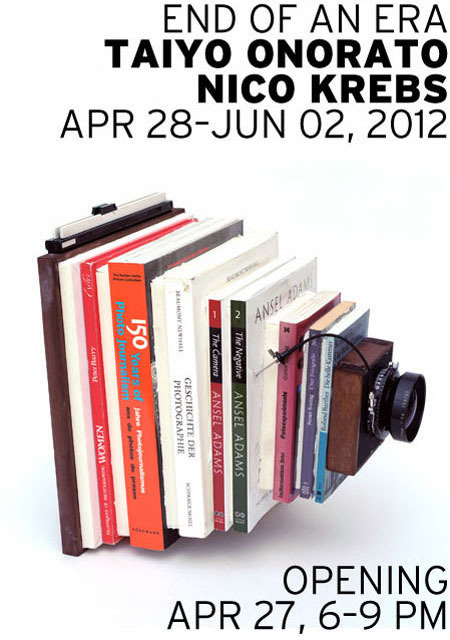 In "End of an Era", the second solo exhibition with the artist duo Taiyo Onorato & Nico Krebs, the gallery Feldbuschwiesner will present new works from the years 2010-2012.

In "End of an Era" Onorato and Krebs continue to explore the nature of perception, a theme that also distinguishes their most wellknown photographic series to date, "The Great Unreal", produced during their travels through the US. Their illusionistic visual universes and installations thrive on the interplay between the visible and invisible nature of illusion and the encounter of reality and the imagination.

The exhibited photographs and installations reflect the ambivalent role of photography on one hand as a documentary medium used to depict reality and on the other hand as an artistic instrument for the creation of new, dream-like imaginary worlds. The exhibition title "End of an Era" refers to the value of analogue image production, the end of which is constantly being prophesied, particularly since the demise of the pioneer of photography, Kodak.

Photo series such as "Ghosts” and "Sculpture Workshop”, which follow on from the series "Rotationen" (Rotations), produced in 2011, show ephemeral, bright, radiating figures. The ghost-like entities have arisen from experiments with rotating constructions, which have been photographed using a long exposure time. In this
way, the camera becomes an artistic creator of new forms, which would not be visible in reality. The wondrous creatures conjure up associations with magic and mysticism, with which photography was associated in the early days.

At the same time, the artists constantly make playful references to the real genesis of the magical entities: in the series "Sculpture Workshop”, a workshop equipped with tools and material can be seen, in which the constructions of the rotating bodies were produced. In the installation presented in the exhibition, the visitor is able to gain a more precise impression of such a manipulated pictorial space, the kind artists frequently use for their analogue photographic works. The installation shows a replica of a photo studio with cameras that resemble antique concertina-style models. It is not until one looks closer that the unusual materials of which they are made, such as ceramic and
wood, catch the eye. The devices are fully functional and have been equipped with precision lenses.

However, in the exhibition space they become sculptural elements, refl ecting a longing for the technology of a bygone era and advocating the deceleration of the photographic process in an age that is fl ooded with digital images. Taiyo Onorato and Nico Krebs demonstrate that the "end of an era” need not be anticipated for a long time and in their new works they show how much our perception of the world is aff ected by presumption and belief.

Taiyo Onorato (*Zurich, 1979) and Nico Krebs (*Wintherthur, 1979) studied photography at the Zurich University of the Arts. Their common interest in the manipulation of reality, in the play with proportions and perspectives, led them to team up in 2003 and form an artist duo. Their works have subsequently been exhibited in a number of museums and institutions including Kunstmuseum Thun (2006), Fotomuseum Winterthur (2009), Museum of Design, Zurich (2010), the Art and Exhibition Hall of the Federal Republic of Germany (2011) and Kunsthalle Mainz (2011). The duo gained international recognition through solo exhibitions in PS1 MoMA (2006) and the Swiss Institute (2008) in New York as well as EX 3 Art Centre in Florence (2010) and in MUDAM, Musée d’Art Moderne, Luxemburg (2011).

Their works are represented in renowned international collections, for example the state collection of the Centre national des arts plastiques, France, the collection of MUDAM – Musée d‘Art Moderne Grand-Duc Jean, Luxembourg, of the Fotomuseum Winterthur, Switzerland and the National Museum of Photography, Copenhagen, Denmark.