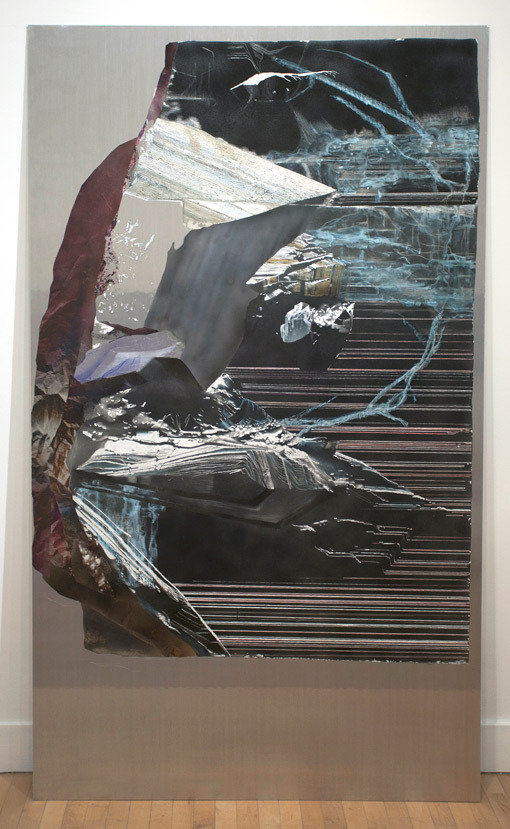 Shows initiated this body of work while in residence at the Bemis Center in the summer of 2011. Beginning with digitally scanned images of pyrite, Shows constructs and collages large-scale paintings on aluminum panels, with materials including ink, acrylic paint, Mylar, Plexiglas, metal filings, sand, crushed glass, and canvas. The works are spectral, reflective, and aim to accurately depict their object source, yet engage the alchemical mythology of the material. A second body of work includes a series of cast sulfur objects. Shows' casts of everyday forms—remotes, telephones, toys—conjoin cast-away objects with an element that is used heavily in industrial processes.

Shows has built deep resonance between the two series and a video work, The Cares of a Family Man (2012). The iron pyrite landscape works are illusory, artificial representations of fool's gold, an economically useless yet psychologically and historically charged sulfide mineral. In contrast the sulfur sculptures are chalky, a waxy opaque yellow copy of senseless objects. The Cares of a Family Man utilizes Kafka's story about an object named Odradek to illustrate the disorienting dimensions and unstable perceptive qualities shared by all her works.

For Shows the pyrite landscapes present "a field of features ... doing landscape painting is about being able to spread out details ... where I could have multiple interactions between multiple things—formal, linguistic and conceptual interactions between different images and materials that I would choose to put in a painting together. That's the engine of the painting."

Shows is keen to reveal "ways culture and human thought are tied to the structure of objects." Together her works explore value systems, geologic and industrial flows, and human biology in relation to deep time registers. Between epic scale and direct, physiological experience, Shows engages an endless feedback loop between our minds and the material world.

All works courtesy of Haines Gallery, San Francisco, and the Artist.

About the artist
Leslie Shows's (AIR 2011) work has most recently been exhibited at Haines Gallery, San Francisco; The Nelson Gallery at University of California, Davis; Atlanta Contemporary Contemporary Art Center; and the Mercosul Biennial, Porto Alegre, Brazil.. Her work has been shown at the Orange County Museum of Art, Oakland Art Museum, Yerba Buena Center for the Arts and the San Francisco Museum of Modern Art. Shows is the recipient of a Fleishhacker Foundation Eureka Fellowship, an SFMOMA SECA Award, an Artadia Award and the Tournesol Award from Headlands Center for the Arts. In addition to group shows throughout the United States, Shows has had four solo exhibitions with the Jack Hanley Gallery in New York, Los Angeles and San Francisco. Her work has been written about in The New Yorker, ArtReview and Artforum, and featured in Harper's. Shows was raised in Juneau, Alaska and currently lives in San Francisco.

About the Bemis Center
The Bemis Center for Contemporary Arts was founded in 1981 by artists, for artists. Bemis Center's sole mission is to support contemporary artists of exceptional talent. In this spirit, the Bemis Center seeks to perpetually give the institution to artists working at the forefront of contemporary culture. Our international artist-in-residence program, exhibitions, projects, and community arts programs provide direct support to artists' process and catalyze their work to engage and challenge the public.