The exhibition combines his most recent work with earlier works to provide the context for a broader and deeper appreciation of his oeuvre by new audiences. Gursky captures the toxic reality of the urban water mass, and spins it through the lens of the abstract sublime to dramatic and resonant effect. 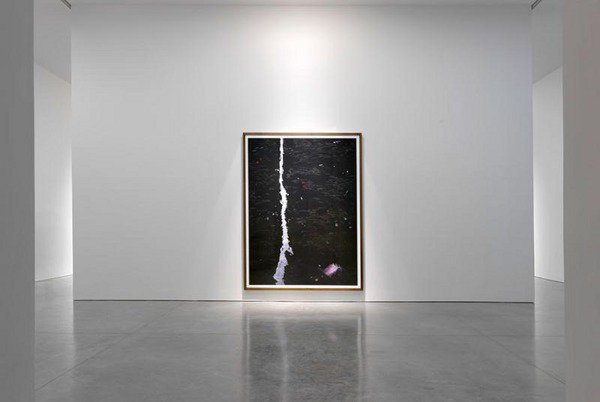 Gagosian Gallery is pleased to announce Andreas Gursky's first-ever exhibition in Asia. The exhibition combines his most recent work with earlier works to provide the context for a broader and deeper appreciation of his oeuvre by new audiences.

Contemporary Asia has provided extraordinarily rich and surprising subject matter for Gursky and, over the last twenty years, he has photographed in Japan, Thailand, China, and North Korea. Some of the first pictures he made were in Hong Kong in 1994-among them Sha Tin racetrack, Hong Kong airport, and Shanghai Bank, the last of which appears in this exhibition. The Bangkok series of 2011, shot on the Chao Praya river in central Bangkok, represents a bold new direction in his work.

By pure circumstance, Gursky found himself fascinated by the phenomenon of the river flowing beneath a city overpass, the intense light effects, and the flotsam and jetsam carried by in the dark water. A major arterial waterway that is as compromised by manmade pollution as by disequilibrium in the natural hydrological regime, Chao Phraya is revealed by Gursky to be at once a dumping ground for all manner of manmade detritus (used condoms, a child's bed mattress, a car tire); a crucible for ecological disorder (as evidenced by a dead fish, and the pretty but devastating weed known as water hyacinth); and a reflecting, refracting surface for the modern city itself. But it was only during the post-production process that a clear relationship emerged with abstract painting, as well as the broader implications of depicting an ecologically threatened waterway in seductive visual terms. Gursky captures the toxic reality of the urban water mass, and spins it through the lens of the abstract sublime to dramatic and resonant effect.

For the Hong Kong exhibition, Gursky continues the approach he took for his most recent exhibition at the Louisiana Museum in Denmark, combining the large-scale, painterly and almost abstract Bangkok series with other works-in both large and small formats-that deal primarily with social and cultural production, from the bamboo-weavers of Nha Trang (2004)to the clubbers of Cocoon II (2008). The selection includes some of his best-known works, such as the iconic 99 Cent II (2001), in which the banality of an American supermarket becomes a complex abstract aggregation of saturated color, compulsive arrangement, and dizzying selection.

It was for the travelling exhibition"80-08" that Gursky began combining scales, partly as a practical measure to be able to show a more comprehensive range of subjects in relatively small spaces. Since then, he has continued to experiment with this idea of the monumental and the miniature, finding that representing a large photograph in a very small format completely changes its reception: in some instances, such as Shanghai Bank (1994) and Pyong Yang IV (2007), the small scale emphasizes the strong abstract compositions that underpin the representational content. But with images such as the mysterious, gleaming Kamiokande (2007) and Kathedrale (2007) with its ethereal stained glass windows drained of color, the large format is instrumental to the presence of the work. In this way, surprising juxtapositions are created within which pictorial structures and patterns can be more closely compared and examined.

Just as history painters of previous centuries found their subjects in the realities of everyday life, Gursky finds inspiration in his own spontaneous visual experience and via reports of global phenomena in the daily media. The resulting pictures have a formal congruence deriving from a bold and edgy dialogue between photography and painting, empirical observation and artfulness, conceptual rigor and spontaneity, representation and abstraction. Grappling with the abstract aesthetic structures that underlie manmade or natural environments, and reconstructing real subjects according to his inner eye, Gursky presents a world view that fuses the flux of life and nature with the stillness of metaphysical reflection.

Andreas Gursky was born in 1955 in Leipzig, former East Germany. He attended Folkwangschule, Essen (1978-81) and Staatliche Kunstakademie, Düsseldorf (1981-87). A selected survey exhibition is currently on view at the Louisiana Museum in Denmark, and a major retrospective will open at Museum Kunstpalast Duesseldorf this fall. Other recent museum exhibitions include "Werke-Works 80-08", Kunstmuseen Krefeld (2008, toured to Moderna Museet, Stockholm and Vancouver Art Gallery in 2009); Kunstmuseum Basel, Switzerland (2007); Haus der Kunst, Munich (2007, toured to Istanbul Museum of Modern Art, Sharjah Art Museum, National Gallery of Victoria, Melbourne, and Ekaterina Foundation, Moscow in 2007-08); The Museum of Modern Art, New York (2001, toured to Reina Sofia, Madrid, Centre Pompidou, Paris, and Museum of Contemporary Art, Chicago in 2001-02). His work is included in important public and private collections throughout the world.