Sea Of Tranquility. His latest works show a move towards miniaturization and diversity. While the artist sets out from traditional techniques, his new works also present digital animation. 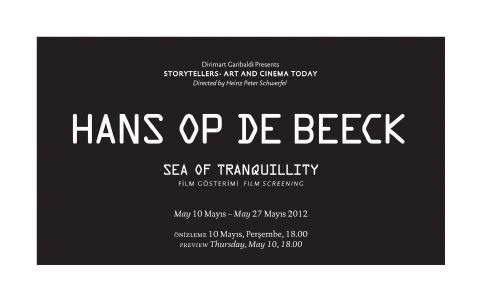 The Belgian artist Hans Op De Beeck constructs a cinematic language consisting of sculptures, paintings, drawings, installations, photography, video work, animated films, and short stories. The artist uses a plethora of different media, shifting from one frame to another while using an economical and minimal visual language or exaggerated designs. Hans op de Beeck’s film entitled “Sea of Tranquillity” will be presented at Dirimart Garibaldi between May 10 – 27.

The Belgian artist’s latest works show a move towards miniaturization and diversity. While the artist sets out from traditional techniques, his new works also present digital animation. Op De Beeck strives to choose and utilize the most enunciative and effective technique for each particular work. He frequently uses several aesthetic forms at the same time. In his images he captures the tragicomic absurdity of our postmodern existence.

Op De Beeck shows the viewer non-existent but identifiable places, moments, and characters that appear to have been taken from contemporary everyday life. His works are irrefutably fictional as much as they are meticulously constructed and staged. Hans op de Beeck leaves it to the viewer whether to take the work seriously, as a sort of parallel reality, or to immediately put it into perspective as no more than a visual construct. His works more often than not deal with fun situations as well as spaces of entertainment and leisure - parties, feasts, parks, festivities, fairs, cafés, swimming pools, and gardens. The artist challenges the twisted circumstances of these areas of recreation, stripping them free of their elements of amusement and conviviality.

Stating that his artistic roots lie in sculpture and painting, Op De Beeck refrains from defining himself as a film-maker, acknowledging his artistic standpoint with these words: “When I use video, I use it in a different way than a film-maker would do. I have another conception of time and I am not fighting that. I don’t want to be a film-maker. I am not pretending to be one. To be honest, I don’t know much about film-making! I am a visual artist.”

Op De Beeck’s architectural works are actually key to understanding his body of work. An aesthetic recurrence in his works is the fastidious production of many objects and spaces. In this manner, the artist’s main objective of sculptural construction is achieved. In his film “Sea of Tranquillity”, Hans Op De Beeck juxtaposes various techniques together once again, thus reflecting his desire to question the boundaries between these different techniques. The main purpose of this film is to spawn familiarity in the viewer, while simultaneously destroying his/her ability to remember and in turn allow them to procure their own experiences.

The protagonist of the story is the fictional cruise liner, and the events taking place on this cruise liner and the psychological plots of her characters can only by recognized when one reads between the lines. At first glance the protagonist, namely the “Sea of Tranquillity” cruise liner appears to be a military ship. In this manner, she seems to be in constant need to avoid any disturbance from the outside world. The film actually is a critique of the safe and superficial microcosms, which the upper classes constantly strive to create wherever they roam around the world. These types of cruise liners are prototype of the cultural model of consumption and leisure; similar to artificial cities webbed with over-organized shopping malls and/or the overprotected luxury estates. These areas are free of crime, and thus remote from the real course of daily life. Everything is programmed, organized, and pre-planned. These are worlds of their own, where the passengers cannot experience time. Centuries ago people would board these ships to see faraway lands, whereas today they only set foot to be serviced, to wind down, to stuff themselves, and to have their share of the gamble. Hans Op De Beeck was born in Turnhout, Belgium in 1969.

The artist has worked with paintings before moving to new media. Over the past ten years, he has developed his career through international exhibitions. His work consists of sculptures, installations, video work, photography, animated films, drawings, paintings, and short stories. It is his quest for the most effective way of presenting the concrete contents of each work that determines the medium that the artist ultimately selects. The scale can vary from the size of a small watercolor to a large, three-dimensional installation of 300m2. The artist not only uses a very wide variety of media, but also deliberately employs a diversity of aesthetic forms, ranging from an economical, minimalist visual language to overloaded, exaggerated designs, always with the aim of articulating the content of the work as precisely as possible. Hans Op De Beeck lives and works in Brussels.