'North Italian Paintings from the Accademia Carrara, Bergamo' focuses on the areas and specific works that make the collection so distinctive. On display three predella panels from Lorenzo Lotto; Giovanni Bellini's hauntingly beautiful Pieta'; Orpheus and Eurydice, an early poetic, pastoral work by Titian. Tomas Saraceno's 'On the Roof: Cloud City' is a constellation of interconnected modules constructed with transparent and reflective materials for the Museum's Iris and B. Gerald Cantor Roof Garden. 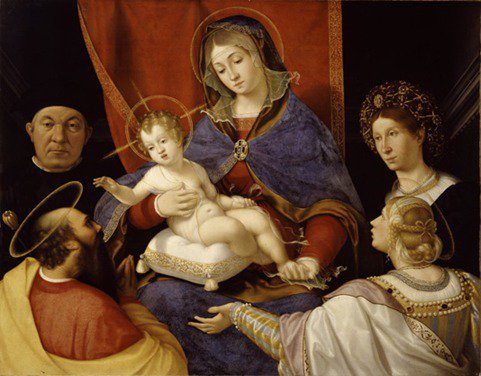 The Accademia Carrara in Bergamo (northeast of Milan) is one of the jewels of Italian museums and a haven for art lovers. Founded at the end of the 18th century by Count Giacomo Carrara and housed in a beautiful neo-classical building, it contains a range of masterpieces dating from the 14th to the 19th century, with an outstanding collection of Renaissance Venetian, Lombard, and Florentine painting. Because it is currently closed for restoration, the Accademia Carrara will lend the Metropolitan Museum 15 masterpieces by Venetian and north Italian painters of the 15th and 16th centuries, including works by Bellini, Titian, and Lorenzo Lotto.

The exhibition is organized by The Metropolitan Museum of Art in collaboration with the Accademia Carrara of Bergamo.

Unlike many of Italy’s best-loved museums, the Accademia Carrara was not founded by the state; rather, its collection was formed in large part by a group of brilliant collectors of the 18th and 19th centuries, including the connoisseur Giovanni Morelli, who was from Bergamo. Its collections reflect their tastes, interests, and connoisseurship, and these collections, in turn, had an enormous influence on collecting in London and elsewhere in the later 19th century. The exhibition will focus on the areas and specific works that make the collection so distinctive. These will include the three predella panels from Lorenzo Lotto’s magisterial altarpiece of 1513-1516, which was painted for Santo Stefano in Bergamo; Giovanni Bellini’s hauntingly beautiful Pietà (1470s); Orpheus and Eurydice (ca. 1512), an early poetic, pastoral work by Titian; and one of Lorenzo Lotto’s finest portraits, Lucina Brembati (about 1520). Installed within the context of the Metropolitan Museum’s own holdings of these same artists, the works will have an added resonance.

Bellini, Titian, and Lotto: North Italian Paintings from the Accademia Carrara, Bergamo is organized by Andrea Bayer, Curator in the Metropolitan Museum’s Department of European Paintings.

The exhibition will be accompanied by a brief catalogue with essays written by Andrea Bayer and Maria Cristina Rodeschini, Director, Accademia Carrara, Bergamo. The publication will provide an introduction to the Accademia Carrara, its donors, and its history, and will characterize the group of paintings chosen for the exhibition. It will also include an illustrated checklist.

Artist Tomás Saraceno (born in Tucumán, Argentina, in 1973) will create a constellation of large, interconnected modules constructed with transparent and reflective materials for the Museum's Iris and B. Gerald Cantor Roof Garden. Visitors may enter and walk through these habitat-like, modular structures grouped in a nonlinear configuration. Over the past decade, Saraceno has established a practice of constructing habitable networks based upon complex geometries and interconnectivity that merge art, architecture, and science. The interdisciplinary project "Cloud Cities/Air Port City" is rooted in the artist's investigation of expanding the ways in which we inhabit and experience our environment.

Press requests for information, images, and interview opportunities can be
directed to the Communications Department: Phone: (212) 570-3951 Fax:
(212) 472-2764 Email: communications@metmuseum.org