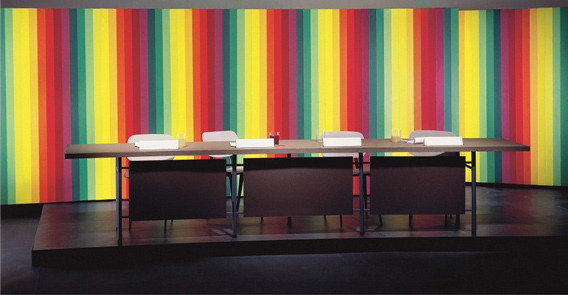 Museum of Contemporary Art Tokyo (MOT) is pleased to present a solo exhibition by Thomas Demand. This exhibition will be the first in a Japanese museum to present a comprehensive view of Demand's activities, from his early works to his recent film pieces as well as his well-known pieces such as Bathroom (1997) and Grotto (2006).

Thomas Demand (born 1964) is one of the leading figures on the German contemporary art scene. He is famous for recreating a scene himself then photographing this to produce carefully constructed pictures. Demand often recreates scenes of political or social events made of paper life-sized models, based on photographs from mass media, then photographs the result. He cuts common images out of ordinary daily life—a bathroom with a glimpse of the bathtub, and a sink full of unwashed dishes, which, at first glance, could almost be mistaken for the real thing, but closer inspection reveals that the space contains an unnaturally uniform texture, producing a strange feeling of wrongness. Significant places, psychological landscapes set against everyday backgrounds; Demand quietly confronts us with these in a thrilling fashion.

The exhibition will present approximately 30 works including a new film, Pacific Sun (2012), which will mark its premiere in a public museum. One of the highlights will be Control Room (2011), which is an image of the central control room of the Fukushima Daiichi atomic power plant after the Great East Japan Earthquake on March 11 of last year. The catalogue accompanying the exhibition will contain an essay by an internationally renowned German film director, Alexander Kluge, and a conversation between the artist and a distinguished Japanese writer, Yoko Tawada, who lives in Berlin.

The Museum of Contemporary Art Tokyo holds regular themed exhibitions, based on its collection of over 4,500 works, to introduce the appeal of postwar / contemporary art from a variety of angles. The current exhibition has three themes.

On the 3F we will present an exhibition entitled 'The name of Art Works' featuring art works produced between the 1960s and 1980s.
When enjoying a work, we naturally look at the title. In art, the title provides a clue as to how it should be read and functions to facilitate comprehension. During the second half of the twentieth century, particularly from the 1960s onwards, the expressive range of the works was enlarged to include a variety of media, while numerous styles appeared without any dominant tendency. At the same time, titles also underwent a metamorphosis. This transformation in works and titles is thought to reflect a shift in the works and their surrounding circumstances.

This exhibition will feature works from our collection, produced between the 1960s and 1980s, focusing on their titles, which are 'The name of Art Works'. We hope that when you take the time to look at these works from our comprehensive collection of postwar art, of which we are justly proud, it will provide you a chance to pause and consider exactly what it means to appreciate art.

On the 1F we will hold a special exhibition presenting the body of the work of Toshinobu Onosato (1912-1986) to commemorate the 100th anniversary of the birth. Onosato specialized in compositions producing optical illusions and creating his own unique pictorial space, becoming a pioneer of abstract painting in Japan. His 'Betamaru' series of work, in which the surface of the picture is divided through the use of circles and straight lines, received high acclaim overseas. This exhibition will feature works recently donated to the museum from the Yoshiharu Fukuhara Collection, together with oil paintings already belonging to our collection.

Also on 1F we will be holding the 'New Acquisitions' featuring works that entered the collection during fiscal year 2011. As is appropriate for a leading museum in Tokyo, the national capital and a major international city, we collect works of contemporary art, from both home and abroad, in an effort to make our exhibitions even more comprehensive. This is an important role for us as a museum, to both preserve works indispensable to the assessment of art history and also to support the activities of young artists. During the last fiscal year we acquired 396 works produced between 1950 and 2011.

From among these new acquisitions we will feature work by the sculptor, Anish Kapoor, who designed the commemorative tower for this year's London Olympics, work by the sculptor, Yutaka Sone who continues to be active throughout the world, a body of early work by Yoshitomo Nara (deposit), work by his old university teacher, Nobuya Hitsuda, who creates unique landscape paintings, and work by the spirited video artist, Mami Kosemura.

A computer suffering a system error, musical instruments and cacti that emit electromagnetic waves; organic and inorganic objects, the visible and invisible—all these combine to produce a concert. MOHRI Yuko’s usual lively mechanical works develop the space, transforming the pavilion into a giant living creature.

This project is to be held jointly by the Museum of Contemporary Art, Tokyo, which endeavors to promote a new generation of artists through such events as the ‘MOT Annual’ and its activities in collecting works, together with the financial information provider, Bloomberg, that is engaged in philanthropic programs throughout the world, providing support for art and other cultural activities. Following on from the 2007 event, this will be the second collaboration in the series, which aims to support young artists and improve accessibility to art. All programs held in the pavilion are free of charge and anybody may enjoy them. October 2011 will see the birth of a new art space at MOT from which to transmit latest talent.