ollowing two successful editions in 2010 and 2011, Museum Boijmans Van Beuningen and the Port of Rotterdam have once again invited a contemporary artist to make an installation in Rotterdam's docklands. With the exhibition Ballads, Sarkis (1938) has transformed the industrial Submarine Wharf into an extraordinary 'gesamtkunstwerk'. 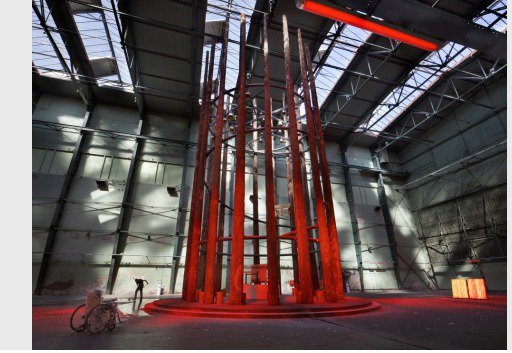 The Submarine Wharf in Rotterdam's docklands is currently undergoing a true transformation. The construction of the various monumental sculptures that make up Sarkis' installation Ballads, commissioned by Museum Boijmans Van Beuningen and the Port of Rotterdam, is almost finished. They include an 18-metre bell tower and a 16-meter lampshade in which a spotlight rises and falls to the rhythm of the artist's breathing.

This summer the Submarine Wharf on the RDM Campus is presenting the installation Ballads by Sarkis (born 1938). The building's original function—submarines were once built here—and the surrounding water are central to the installation. Sarkis unites the building's past and present, creating an extraordinary experience for the visitor with monumental objects, music, and coloured films that filter the daylight like a modern variant of stained-glass windows. Sarkis is the third artist that Museum Boijmans Van Beuningen and the Port of Rotterdam have invited to make an installation in the Submarine Wharf.

Water and air
"In Ballads Sarkis attempts to create a connection between the dark depths of the water and the majestic expanse of thin air," writes guest curator Nicolette Gast in the booklet that accompanies the exhibition. The carillon continuously plays the composition Litany for the Whale by American composer John Cage (1912–1992) and takes the visitor on a journey into the realm where submarines and whales meet. The pendant to the monumental bell tower is the slender 16-meter-high lampshade covered with white down feathers. The Futuro, a futuristic holiday home, has come to land in the Submarine Wharf, forming an auditorium for Sarkis' videos about water: experiments in form and colour.

Ballads
The exhibition's English title Ballads—meaning a form of narrative verse or slow, romantic song—should not be taken too literally. The French verb 'se balader' means to go for a walk. Sarkis wants visitors to wander at leisure through the exhibition, accompanied by the music. Visitors can also explore the installation on one of the sixty bicycles arranged below the enormous lampshade.

Musical activities and more
Every Sunday there will be live music on the carillon by Frank Steijns and other musicians. Museum Boijmans Van Beuningen is organising a jazz concert, a carillon and organ concert, and carillon and piano concerts. To coincide with the installation in the Submarine Wharf, Museum Boijmans Van Beuningen will present a satellite exhibition of new work by Sarkis: an interpretation in watercolour on ninety-six sheets of the score of Ryoanji by John Cage.

From June a video about Sarkis can be seen on the museum's online video channel: www.arttube.nl.

Sarkis
Sarkis Zabunyan was born in 1938 in Istanbul. In 1964 he immigrated to Paris, where he began using only his first name. Sarkis has exhibited internationally since the 1970s, including at the Venice Biennale, the Istanbul Biennial, and Documenta in Kassel. He recently had a solo exhibition at the Centre Pompidou in Paris (2010). Sarkis is currently participating in the Paris Triennale. His installation La Frise des trésors de guerre (The Frieze of War Trophies) is on display at the Palais de Tokyo.

Submarine Wharf
The Submarine Wharf is a partnership between the Port of Rotterdam and Museum Boijmans Van Beuningen. Every summer for five years a leading contemporary artist will make a large installation specially for the space. The wharf, built in 1937, is comparable in size to the Turbine Hall at Tate Modern in London. The first two exhibitions in the series were by Rotterdam-based Atelier Van Lieshout in 2010 and Scandinavian art duo Elmgreen & Dragset in 2011. The Submarine Wharf is one of the Port of Rotterdam's initiatives to bring a wider public in contact with the harbour and to improve the quality and experience of the docklands.

The bicycles in this exhibition have been supplied by Union.