In an absolute disorder

The exhibition of the Kandinsky Prize, the largest independent award in Russian contemporary art, presents the works of the best and the most relevant Russian artists such as Alexander Brodsky, Dmitry Gutov, Vadim Zakharov, Irina Korina, Oleg Kulik, Igor Mukhin and Boris Orlov. Curated by Andrei Erofeev. 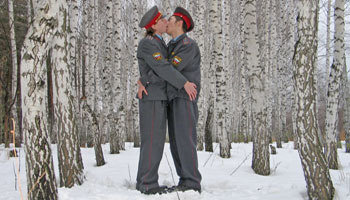 curated by Andrei Erofeev
ArtChronika Cultural Foundation presents the exhibition «In an absolute desorder Russian contemporary art. Kandinsky Prize (2007-2012), » which will be on view from June, 15th – September, 30th 2012 at Arts Santa Monica, Barcelona, Spain. This project has been organized in collaboration with Cultural Department of Catalonia and Arts Santa Monica and the support of Barcelona City Hall. Russian art today needs to develop more contacts with the rest of the world. The award is doing much in this regard by organizing exhibitions abroad. This exhibition promises to be an outstanding event in Russian-Spanish cultural relations.

Exhibition of the Kandinsky Prize, the largest independent award in Russian contemporary art, presents the works of the best and the most relevant Russian artists – nominees of the five years of competition. The most recent Russian art will be on show for the European public, the works of almost all the protagonists of our art scene will be presented. Audience will see the works of such artists as Alexander Brodsky, Dmitry Gutov, Vadim Zakharov, Irina Korina, Oleg Kulik, Igor Mukhin, Boris Orlov, Anatolii Osmolovsky, Pavel Pepperstein, Nikolay Polissky, Dmitri Prigov, Blue Noses group among others. The main aim of the exhibition is to reveal and systematize the constant, repetitive motifs, themes and techniques which make up the nature and specifics of the national school of contemporary art.

The Exhibition will be displayed on four levels, which exposes its main focus intended by curators:
• Archive. Dmitry Prigov, the last conceptualist;
• Material chaos. The aesthetics of "bad" things, or contextualist art;
• Social disorder. Tyrannicidal performance and art-reportage;
• The collapse of the church's canonical symbolic systems.

Additional information:
ArtChronika Foundation is founded and chaired by Shalva Breus, the publisher of the leading Russian art magazine ArtChronika, The foundation is meant to promote the contemporary art in Russia. For that purpose the Kandinsky Prize was created at the Foundation in 2007.
The Kandinsky Prize, named in honour of the great Russian artist and pioneer of abstraction, Vassily Kandinsky, was established by the ArtChronika Foundation in 2007. It immediately occupied a prominent place in Russian cultural life. It is unique in Russia as the first ever non-governmental annual prize in contemporary art. It is organizationally and financially independent and is judged by an internationally acclaimed jury and a carefully selected council of experts. Most notably, it allows any artist to participate in the contest. Its selection process includes four rounds: a primary online screening of submissions, a private preview, a selection of finalists at the Moscow exhibition of nominees, an announcement of winners at the award ceremony. The finalists and winners are given an opportunity to exhibit abroad. In 2008, the nominees exhibitions were shown in Riga and Berlin, in 2009 – in London.