Jasper Johns: Variations on a Theme celebrates the artist's visionary response to printmaking, this exhibition's rich array of well-known works and ambitious new experiments from 1960 to 2011. 'Drawing Space' presents Antony Gormley's works on paper, bringing together approximately 80 prints and drawings created over 40 years. John Cage created his first watercolors at Mountain Lake Workshop in Virginia in 1988. These open, lyrical abstractions brought color, gesture, and improvisation to his music, art, and texts. 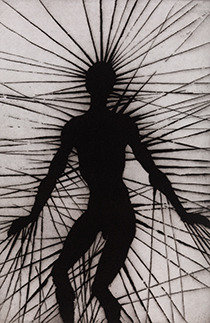 Jasper Johns
Variations on a Theme

Jasper Johns’s creative impulses and collaborations with distinguished print workshops have produced over 360 editions, acclaimed as some of the most pioneering artworks of the last century. Printmaking has been integral to the American artist’s career for more than five decades. His interest in making variations of a single motif found a natural outlet in the medium, which allows for the reworking of ideas and records the stages that lead to a final image. While lithography has been his primary technique, Johns has also used intaglio, silkscreen, and lead relief to interpret subjects drawn from popular culture, his earlier work, and the history of art.

Jasper Johns: Variations on a Theme celebrates the artist’s visionary response to printmaking. Johns uses the medium to revisit and vary his subjects, transferring, reversing, repeating, and layering imagery in new and exciting combinations. The exhibition opens with early prints from 1960 like Target, Flag III, and 0 through 9, when Johns first experimented with lithography at publisher Universal Limited Art Editions in Long Island, New York. It unfolds with variations of these subjects to reveal the artist’s evolving interests through the decades. Figure 1 (1969) shows his exploration of color and printmaking techniques in collaboration with publisher Gemini G.E.L. in Los Angeles, California. The series Fragments–According to What (1971) excavates details from his 1964 painting, According to What. In the 1970s, an abstract aesthetic emerges with a crosshatch motif in works like Savarin (1977). In the 1980s, Johns began incorporating autobiographical references from his home and studio as well as traced fragments of other artist’s work, as seen in the remarkable intaglios The Seasons (1987). The grand etching Untitled (Black with Primaries) (1991), created with copper plates he had used 10 years earlier, demonstrates Johns’s inclination to use the materials of printmaking to interpret imagery in new ways. Johns’s latest prints, Fragments of a Letter (2010) and Shrinky Dinks 1–4 (2011), combine stenciled text and hand gestures from American Sign Language. This exhibition’s rich array of well-known works and ambitious new experiments traces the journey of Johns’s innovative prints from 1960 to 2011.

The exhibition is organized by The Phillips Collection in collaboration with the John and Maxine Belger Foundation.

Acclaimed for his sculptures, installations, and public artworks that investigate the relationship of the body to space, British artist Antony Gormley is also an accomplished draftsman. Drawing is a core part of Gormley’s practice, ranging from studies for sculptures to individual works on their own. Drawing Space is the first U.S. museum exhibition to present Gormley’s works on paper, bringing together approximately 80 prints and drawings created over 40 years. Often made at night, they employ unusual materials such as blood, earth, casein, and bleach, and fluctuate between figural and abstract shapes. Although mostly created using his own body, Gormley’s figures address collective experience and memory. The exhibition also includes two recent sculptures, emphasizing the intrinsic link between the artist’s sculptural practice and the act of drawing.

Gormley’s most direct engagement with the human form appears in early drawings such as Mansion (1982) and the Body and Light series (1990–95), which capture floating figures immersed in space. The body is also the focal point in the Body and Soul etchings (1990), but as fragments: hands, eyes, mouth, nose, knees, and spine. Created with imprints of the artist’s body placed against stark black or white backgrounds, these works highlight the coexistence of opposites: light and dark, positive and negative, subjective and objective.

A more abstract approach is evident in the large-scale lithographs Bodies in Space (2007), in which figures dissolve into black and white drips. In the Clearing drawings (2005–09), the body gives way to looping lines that form whirling abstract shapes or energy fields. In the monumental Breathing Room XXIV (2010), angular web-like structures unfold into the limitless depth of space. The interconnection between Gormley’s sculpture and drawing becomes clear in the linear quality of the two steel structures Clasp II (2010) and Aperture XIII (2010), underscoring the artist’s attempt to explore both the body and space.

Antony Gormley: Drawing Space is organized by The Phillips Collection.

John Cage at the Phillips

A musician by training, John Cage (1912–92) explored throughout his life many forms of artistic expression using chance operations and the system of random numbers from the ancient Chinese Book of Changes. Cage created his first watercolors at Mountain Lake Workshop in Virginia in 1988. These open, lyrical abstractions brought color, gesture, and improvisation to his music, art, and texts.

Guided by the Book of Changes, Cage began tracing stones to make abstract patterns. Intrigued by these experiments, painter Ray Kass invited Cage to Mountain Lake for a weeklong workshop during which Cage created four series of watercolors using stones from nearby New River. Cage’s approach to his New River Watercolors was shaped by a dream about painting the circumference of a stone with a feather.

New River Watercolors Series III began with a 36-inch-wide roll of paper, a flat stone approximately nine inches in diameter, and a guinea hen glide-wing feather. In the first watercolor, Cage used the feather to paint the partial perimeter of a stone, then moved the stone and varied the color for the following two sheets. The Book of Changes was used to determine the placement of the stone, the size of the paper, and the number of colors and washes in the work, but experimentation was allowed during the process. Cage unified the series by painting a neutral gray wash on each sheet. The triptych appears to unfold as a sequence in time, a series of movements in space. These watercolors find visual kinship in the meditative works of Morris Graves and Mark Tobey, also on view. Contemporaries of Cage, the group met in Seattle in the 1930s where they forged an intellectual and spiritual relationship that inspired their work.

In conjunction with the citywide John Cage Centennial Festival.