In 'The Status of the Shooter' Jill Magid maps out the sequence of events as a life is violently torn from the world and replaced by panicked attempts to regain social order. For 'Entre utopie et realite' Claude Parent chooses to present fifty drawings, countless utopian visions whose recurring themes can also be found in his finished works. 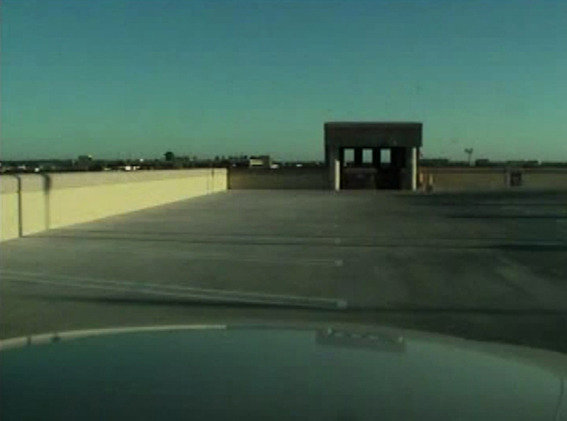 Yvon Lambert is pleased to announce The Status of the Shooter, the third solo exhibition of the american artist Jill Magid.

The exhibition will take place at the Yvon Lambert Gallery from Thursday the 21 of June until the 28 of July 2012.

The Status of the Shooter is the search for a body amid the moral panic and institutional response to a school shooting. Late in 2010, Colton Tooley, a math student at the University of Texas at Austin, wearing a ski mask and armed with an AK-47, walked through campus firing shots into the air and ground. Seemingly without intention to hurt anyone but himself, Cooleyʼs route was completed when he committed suicide in the Comparative Literature and Poetry section on the sixth floor of The Perry-Castañeda Library.

Magid, who had coincidentally been visiting Austin at this time researching another highly publicized shooting, made an Open Records Request to the UT Police Department asking for any information on Tooleyʼs suicide. In return, she received a package containing the ʻdash-camʼ surveillance footage recorded by each of the five police officers called to the scene of the crime, and the recordings of all of the 911 calls related to the incident.

Hoping to gain insight into Tooleyʼs actions, Magid returns to the fictional drama, Geotheʼs Faust, whose themes have informed her recent body of work. Early in the play, Faust despairs that he has failed to understand nature and the universe despite many years of study. Alone in his library, he prepares to take poison to end what he sees as an unfulfilled life. Peeling of church bells and a choir of angels stop him. For Tooley, apparently no such angels sang.

In The Status of the Shooter, Magid maps out the sequence of events as a life is violently torn from the world and replaced by panicked attempts to regain social order. In the installation, which includes a five-channel video piece, audio works, and sculptural elements, she has synchronized and transcribed video and audio footage to reframe the narrative as if written for the public stage.

The Status of the Shooter is part of a larger exploration in Magidʼs work dealing with potency, impact, and charge. Through the search of the absent body, Magid is searching for meaning—both in the world and in her work, seeking herself in the story of another. At the heart of this inquiry (also present in her previous works L.O.V.E, The Spy Project, A Reasonable Man in a Box) Magid addresses the desire to locate the presence of an individual body within larger bodies of public, private and state power.

Yvon Lambert is pleased to announce Entre utopie et réalité (between utopia and reality), the first exhibition of French architect Claude Parent at the gallery. The exhibition will start on Thursday the 21st of June and will last until the 28th of July 2012.!

Claude Parent, born in 1923 in Neuilly-Sur-Seine is one of France’s most revered modernist architects, and an elected member of the Académie des Beaux Arts and the Paris Académie of Architecture. In 1953, his tendency towards avant- garde outlines leads him to Lonel Schein, with whom he creates his agency. From the beginning of the 1960’s, the architect forces himself to a radical break up with the traditional architecture. The emergence of the fracture and the discontinuity in his language leads him to introduce a new vocabulary leaning on an utopian inspiration.

His creations are inspired by numerous encounters like the ones with Nicolas Schöffer, who inspires him the “spatial/dynamic” architecture, Lionel Mirabaud, and especially the theorist Paul Virilio. It is with him that he imagines the concept of “fonction oblique”. He thus looks for a way to redefine our living spaces by building disruptive buildings, with leaning floors and walls. Experimentation is his permanent scope of investigation. Buildings made of ramps, slants, angles, deprived of furnishings – space itself is intended to determine the surface. Concepts such as “wall”, “floor”, “above” and “below” are divested of their original meaning. Social relationships are energized through obliqueness and a playful understanding of space.

With the invention of the “fonction oblique”, Parent becomes one of the most important social utopians in recent architectural history, with students such as Jean Nouvel. Parent is acclaimed as a deconstructionist hero, as one of the first to apply Derrida’s theory to architecture: an existing system is taken apart and reassembled in a new, less hierarchical manner. He also gets closer to the painter Yves Klein in the beginning of the 1960’s, with whom he creates a town planning of air and space. 1979 is the year of recognition for the artist. The Grand prix national d’Architecture is handed to him, and the Presidency to the Académie d’Architecture is entrusted to him.

For his exhibition Entre utopie et réalité at the Yvon Lambert Gallery, Claude Parent chooses to present more or less fifty of his drawings, countless utopian visions whose recurring themes (movement, migration, unreeling, spiral) can also be found in his finished works.

In part of his drawings, Parent leads a reflection on the very topical subject of migration. He also invents an urban utopia whose goal is to make those migrations easier. Then follow drawings of roads punctuated with big stopovers: shelters to spend time in for a few days without the obligation to stay, makeshift hospitals, panoramic viewpoints to gain some height and watch the horizon, protective centers of culture and knowledge...These roads lead to drawings of sedentary cities of which the elusive town planning does not interfere with those migratory flows.

While some drawings suggest a reflection on the importance of the Horizon, and on the absence of light in cities due to huge vertical constructions, others are referring to the architecture of Andre Bloc’s villa, a project that has been realized by Claude Parent in 1959 on a rock wall. Like a volcanic outgrowth that spreads out of the rock, this villa is only leaning on three fulcrums on the ground, leaving it to the empty space to preserve the continuity of the land. Claude Parent amuses himself today by re- drawing the initial project of this villa, which is open to a vast amount of new possibilities, which are more consistent with our time. He also presents a scale model of the villa.

Punctuated with breakings and twists, his whole work reflects on the changes that the French and international architectural world went through since the beginning of the 1950’s. There is only need to remind some of his projects to convince oneself of the radicalism and consistency of a vast thinking mind on art and architecture: the experimental houses designed with Lonel Schein (1952-1955), the collaborations with André Bloc and the artists of the ‘Espace’ group at the beginning of the Invisible Revolution, La Maison d’André Bloc (the house of André Bloc, 1959-1962), la Maison de l’Iran (the house of Iran, 1960-1968), la Maison Drusch (the Drusch house, 1963), the bunker-church Sainte-Bernadette du Banlay (1963-1966) designed with Paul Virilio, the concrete supermarkets, the urban and cultural interventions between 1970 and 1973, the filling of atomic power stations for EDF, the public requests for the national education or even the French pavilion of the Venice Biennale (1970). His work was lastly exhibited ah the Cité de l’Architecture et du Patrimoine of Paris.