Interval 2012. A geographic map of Europe is carved into a non-skid floor rubber while a video captures an apocalyptic fireworks display. 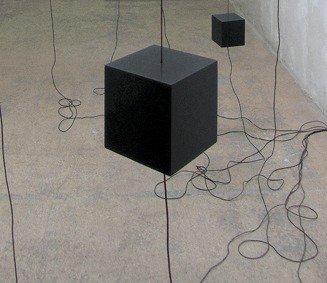 Italian artist Marco Bernardi created project Interval 2012 specifically for the synagogue space in Šamorín. The piece is based on an apocalyptic vision. Bernardi connects predictions associated with 2012 with dramatic changes in Europe as its stability is threatened. He tries to analyze whether or not the convergence of the two is just a coincidence or if there are hidden connections between the predicted end of the world and possible end of contemporary European civilization. The artist turned the synagogue space into a kind of laboratory, wunderkammer, in which he created a simulation of a collapsing microcosm. Self-propelled machines mimic the mechanics of the universe. They explore the chances for change, that could mean the end, or the beginning of a new system. Various machines are in constant motion in this exhibition. Each has its own rhythm and time. Self-propelled mechanisms create some kind of organism, a system that seems to function by itself without any obvious rules. This way it becomes a perfect representation of the universe with its unpredictable behavior. Seventeen black cubes move up and down, seemingly trying to catching up with one another as if they are trying to achieve the same height.

A geographic map of Europe is carved into a non-skid floor rubber while a video captures an apocalyptic fireworks display as a German made metronome counts down the time of the universe’s mechanics, as well as the time between war and peace. Marco Bernardi is known in Italy for his installations, videos and machines that repetitively produce mechanical and cyclical movements. The exploration of automatic processes in nature and human life are important for his work. He expresses (often through absurdity) the uselessness of attempts at achieving progress. However, this attitude is not nihilistic, but suggests an archaic duality between will and destiny.