Shells, Bells, Steps And Silences is a new video installation and film survey by Steve Roden, his inspirational source material becomes a kind of formal skeleton for the finished abstract works. Group Dynamics and Improper Light is a new large-scale installation by artist Gina Osterloh, she constructs life-size room environments and activates them through still serial performances and cardboard cutouts. 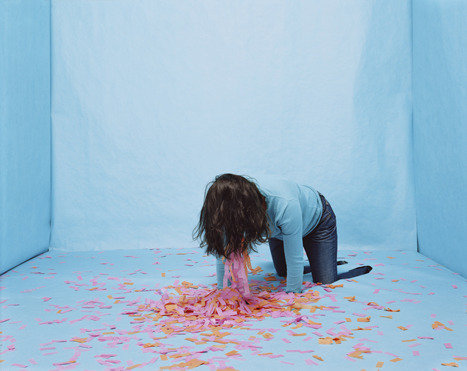 LACE is proud to present Group Dynamics and Improper Light a new large-scale installation by artist Gina Osterloh, curated by Carol A. Stakenas and Robert Crouch. Osterloh constructs life-size room environments and activates them through still serial performances, paper-maché models, and cardboard cutouts. Group Dynamics and Improper Light will explore the relationships between abstraction and identity, the space between individuals, and what determines “a group” within a social context.

This commission marks a new arc in Osterloh’s career. Group Dynamics and Improper Light will be the first time the artist’s process is made public – her meticulous set construction, how each set is dependent upon her 4x5 large format camera, lighting decisions, and experimentation with materials.

For her residency at LACE, she will move her entire studio practice into the main gallery in June 2012, and construct three bodies of work from start to finish. During this time the gallery will be open to the public and Gina will be engaging with visitors as part of her process, as well as through a series of hands-on workshops. When a visitor enters the gallery, they will walk into three unique working stage sets installed in the gallery simultaneously. Each set will explore abstraction and identity through the lens of “improper light”, as each material and light will both illuminate and obscure subjects being photographed.

At the conclusion of the summer residency period, LACE will mount a final exhibition of finished prints which will be on view September 6 – 16, 2012. A monograph accompanying the exhibition will be forthcoming.

ABOUT THE ARTIST
Gina Osterloh is an artist and educator based in Los Angeles, California. Currently she is working on a short film essay that addresses issues of perception and identity through the lens of blindness. Osterloh’s photographic works investigate operations of mimicry and perception within the photographic plane. Upcoming exhibitions include Silverlens Gallery, August 2011 and Yerba Buena Center for the Arts, January 2012. This September 2011, she has been selected to attend the Woodstock Artist in Residency Program for Photograph in Woodstock, New York. In 2007-2008, Osterloh was a Fulbright Scholar recipient to the Philippines, during which she created a new body of photographs that depicted spaces made from everyday office paper used in Manila. During her Fulbright, Osterloh also researched conceptual artist practices in the Philippines; and at Monte Vista Projects LA, curated the exhibition Minimum Yields Maximum that presented conceptual and political works from the Philippines, Vietnam, and California. Other awards include a Durfee ARC Grant 2010 and a Completion Grant by Silverlens Foundation, Philippines 2008.
She has exhibited widely including Hong Kong, Manila, Kuala Lumpur, Singapore, Los Angeles, San Francisco, and New York City. Reviews of her work include Art in America, Hyphen Magazine, Art Asia Pacific, Asian Art News, Art Monthly Australia, Art on Paper, Giant Robot, the LA Times, and Art Forum Online. Osterloh received her BA in Media Studies from DePaul University and a MFA in Studio Art from University of California, Irvine. Gina Osterloh’s work is represented by Silverlens Gallery, Manila and François Ghebaly Gallery, Los Angeles. View more of her work at ginaosterloh.com/work

Carol A. Stakenas is the Executive Director of LACE (Los Angeles Contemporary Exhibitions). She was the lead curator for Los Angeles Goes Live: Performance Art in Southern California 1970-1983, an exhibition, performance series and publication project as part of the Getty’s Pacific Standard Time initiative. The performance series featured re-inventions of historical performances and actions staged throughout the city. Most recently, she produced Suzanne Lacy’s public art work Three Weeks in January: End Rape in Los Angeles, a work that engaged activism, education, media, city politics and art with participants from all of these areas.
Since her arrival at LACE in 2005, Stakenas has worked with over 500 artists, more than 60 of which have developed unique and innovative projects that could only be realized through a residency at LACE. Previously, she was the Deputy Director/Curator of Creative Time, the leading public arts presenter based in New York City.
Stakenas has commissioned and produced multidisciplinary public art at remarkable sites such the Brooklyn Bridge Anchorage, Times Square and Hollywood Boulevard’s Walk of Fame. She has worked with a broad range of artists including Asymptote, Haluk Akakçe, Natalie Bookchin, Chris Doyle, Fallen Fruit, Simone Forti, Cai Guo-Qiang, Granular Synthesis, Shu Lea Cheang, Suzanne Lacy, Takashi Murakami, Marjetica Potrç, Toshi Reagon, Erwin Redl, Steve Roden and Lebbeus Woods.

Robert Crouch is the Associate Director/Curator at LACE, where he organized Resonant Forms, an electronic music festival exploring the relationship between sound, installation, and video, and curated exhibitions with artists Karen Lofgren, Sean Sullivan, and Margo Victor. In addition to Gina Osterloh: Group Dynamics and Improper Light, he is currently curating Shells, Bells, Steps and Silences, a new project with Los Angeles artist Steve Roden.
Crouch is also the co-founding Director of VOLUME, a curatorial project that functions as a catalyst for interdisciplinary new media work through exhibitions, performances, events, lectures, and publications, and has worked with a wide range of artists including William Basinski, Nate Boyce, Loren Chasse, Tim Hecker, France Jobin, Kadet Kuhne, Lucky Dragons, Carsten Nicolai, Steve Roden, and Christopher Willits. VOLUME has presented projects at venues including the Hammer Museum, the de Young Museum, the San Francisco Art Institute, and SF Camerawork.

LACE is proud to present Shells, Bells, Steps And Silences, a new video installation and film survey by Los Angeles artist Steve Roden, curated by LACE Associate Director/Curator Robert Crouch. While Roden has been making films for over 20 years, this is the first body of work he has made with video exclusively, although the visual language and the approach to performance is certainly an extension of his 2011 film, Striations. Shells, Bells, Steps And Silences incorporates 3 research projects conducted by the artist over the past year: a collection of sea shells acquired by Roden from the estate of modern dancer Martha Graham, notes from a recent residency at the Walter Benjamin archive in Berlin, and John Cage’s seminal 4’33”, a work that Roden performed daily over the course of an entire year.

In October 2011, Steve Roden was invited by the DAAD to spend a month researching Walter Benjamin’s archives at the Akademie der Kunste, after having seen some of Benjamin’s notebooks previously in an exhibition in Berlin in 2006. Because he is unable to speak or read German, Roden responded primarily to the visual aspects of Benjamin’s notebooks - and was particularly excited by a series of color-coded symbols that resembled the kind of graphic notations avant-garde composers were exploring during the 1960’s. Benjamin used a variety of visual systems to organize his writings within his manuscripts, and so Roden spent much of his time translating Benjamin’s various graphic decisions and idiosyncrasies into scores.

When Roden arrived in Berlin, he was already ten months into a yearlong project of performing John Cage’s 4’33” every day for a year, and thus there were moments in Berlin where Cage and Benjamin collided. When Roden returned from Berlin, he received two large boxes of seashells and small objects that belonged to the dancer Martha Graham. As he began to work with the results of the Benjamin research, things started to evolve into a kind of “mash-up”, with Benjamin, Cage and Graham entwined.

The largest work in the exhibition is a three-channel video and six channel audio work entitled Shells, Bells, Steps And Silences. It documents 40 short performance events that collide via chance operation - creating a situation where the video clips are constantly “improvising” in different combinations. The score for the piece was composed using Benjamin’s “thematic symbols” to determine actions, objects used, visual/sound relationships, and various permutations of time as related to variations of the individual timings of the movements of Cage’s 4’33”. Many of the objects used as instruments in the film are from Graham’s estate.

Several silent single channel works will also be on view, including Everything She Left Behind That Fits In My Hand, a film of Roden interacting with the objects in his Graham collection, a lexicon of the various ways that Benjamin crossed out unwanted words in his notebooks, and a series of stop motion animated “loops” related to a postcard found in Benjamin’s archive that pictures the interior of a cathedral in Siena.

Shells, Bells, Steps And Silences will also be accompanied by a selection of Roden’s experimental film work spanning his entire career from the late 80’s to the present, much of it never before seen by the public.

ABOUT THE ARTIST
Steve Roden is a visual and sound artist based in Pasadena. His work includes painting, drawing, sculpture, film/video, sound installation and performance. Roden's working process uses various forms of specific notation (words, musical scores, maps, etc.) and translates them through self-invented systems into scores; which then influence the process of painting, drawing, sculpture, and sound composition. These scores, rigid in terms of their parameters and rules, are also full of holes for intuitive decisions and left turns. The inspirational source material becomes a kind of formal skeleton for the finished abstract works. In his visual works, translations of information such as text and maps become rules and systems for generating visual actions such as color choices, number of elements, and image building.

He has been exhibiting his visual and sound works since the mid 1980′s, and has had numerous solo and group exhibitions internationally, including: Mercosur Biennial Porto Alegre Brazil, Centre Georges Pompidou Paris, San Diego Museum of Contemporary Art, UCLA Hammer Museum Los Angeles, Museum of Contemporary Art EMST Athens Greece, Singuhr-Horgalerie in Parochial Berlin, Center for Book Arts New York, The Kitchen New York, Pomona College Museum of Art, La Casa Encendida Madrid, Susanne Vielmetter LA and Berlin Projects, Studio la Citta Verona Italy, and others. In 2010, curator Howard Fox organized the exhibition steve roden / in between: a 20 year survey, which opened at the Armory Center for the Arts in Pasadena, and was accompanied by a full color catalog.

SUPPORT
Shells, Bells, Steps and Silences is made possible with the generous support of the Pasadena Art Alliance.