An exhibition of contemporary sculpture in response to Chardin's House of Cards exhibition. The exhibition has been timed as a sculptural counterpoint to Waddesdon's recent acquisition of Chardin's Boy building a House of Cards. It also builds on Waddesdon's own commitment to contemporary art and its significant and growing collection of work, which includes pieces by Richard Long, Sarah Lucas, Michael Craig-Martin, Angus Fairhurst and Stephen Cox, amongst others. 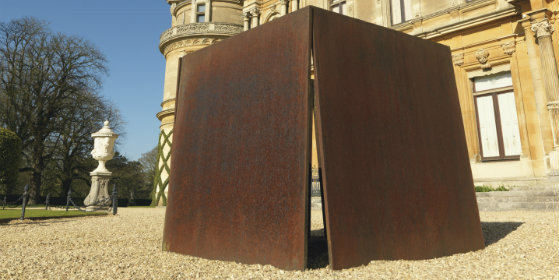 Major sculptural works by the world’s leading contemporary artists will be shown by Christie’s Private Sales from 26 May to 28 October 2012, in an original, curated exhibition inspired by Jean-Baptiste Siméon Chardin’s (1699-1779) Boy Building a House of Cards, 1735, in the grounds of Waddesdon Manor in Buckinghamshire, the home of the Rothschild Collection and one of the most visited of the National Trust properties. 33 works including pieces by Richard Serra, Jeff Koons, Damien Hirst, Donald Judd, Dan Flavin, Anthony Gormley, Urs Fischer and Tony Smith with new works by Anish Kapoor, Joana Vasconcelos and Jeppe Hein, have been chosen by Christie’s as a contemporary response to an exhibition exploring Chardin’s painting, being held in the house following its recent acquisition for the Rothschild collection. 16 nationalities are represented among the works, 24 of which are shown around the grounds of the Manor and the remainder indoors at the Stables. While a few of the works are on loan, the majority are for sale from £60,000 to £7.5 million ($100,000 to $12 million). Lord Rothschild, commented: “Contemporary sculpture is my personal passion and I have been a collector myself for 50 years. Seeing the works in the landscape has given me and those who live and work at Waddesdon the chance to look at the grounds with a fresh eye. I thought that the project would be a really interesting thing to do, particularly because of our Chardin show.”

Francis Outred, International Director and Head of Post-War & Contemporary Art, Christie’s Europe, said: “Chardin was an extraordinary painter, perfectly capturing and distilling onto canvas the very nature of contemporary life. In his paintings depicting a boy building a house of cards, he offers a beautifully elaborated metaphor for childhood and the construction of life, shedding light on the essential forces of gravity, balance and counterbalance, as well as dexterity, chance, contingency, repetition, ritual and the ephemeral. For the first time at Waddesdon Manor, Christie’s is delighted to be staging an original and curatorially conceived project, House of Cards, in dialogue with Chardin’s paintings, uniting some of the greatest contemporary artists working with sculpture today. Sculptural practice has gone through remarkable evolutions since the Second World War. Where bronze, plaster and stone were previously the preserves of artists, today the proliferation of new ideas, theories and materials has had a liberating effect on cultural production. In this exhibition one encounters corten steel, plastic, glass, aluminium, formaldehyde, fluorescent tubing, as well as myriad other materials rendered in all shapes and sizes, indoor and outdoor, some serene, some fantastical, some disorientating, some enchanting. Analysing the themes associated with Chardin’s house of cards, Christie’s has sought out works, which stunningly showcase those principles in their own unique ways.”

The central piece in the exhibition is Richard Serra’s (b. 1939) One Ton Prop (House of Cards), a precarious balancing act of four square steel plates secured by their own weight and combined pressure (see image on page 1). This early and iconic work, apparently light, but paradoxically massive weighing one tonne, engages the physical and mechanical principles that underpin the careful configuration of a house of cards; considerations, which have since dominated the artist’s oeuvre. Teja Bach, the author of Brancusi and Serra, described the piece as an “emblematic sculpture, from which, in a way all the rest of his work derives... The double title emphasizes the two components – weight and precariousness, the former accentuating the dangerousness of the latter. Serra’s vertical sculptures have been developed expressly from the basic model of the house of cards”. Another seminal work is by Jeff Koons (b. 1955) whose Aqualung of 1985, from the celebrated Equilibrium series, is rendered in warm bronze with incredible technical perfection in its detail. It is one of his early and most important masterpieces and invokes a similar absurd parody as in Serra’s work described above; that life-saving equipment based on buoyancy can be rendered in massive, solid bronze. Koons said: “'The tools for Equilibrium were cast in bronze, like Aqualung. If someone really desired equilibrium, was seduced by the sirens to go for it, and had enough courage, they'd out the Aqualung on their back and it would take them under.”

Tony Smith’s (1912-1980) epic Moondog rises over five metres from the ground gently tilting into the landscape. The piece from 1964-67 dominates the landscape. Commanding the space in which it stands, it is built like a matrix with a geometric configuration of fifteen extended octahedrons and ten tetrahedrons, the sculpture visibly mutates when viewed from different angles. At once solid and robust, from other oblique views, the sculpture appears to tilt forwards, projecting the instability innate to the stacked house of cards. This has become one of Tony Smith’s most significant works and has been included in an installation at the Museum of Modern Art in New York and the National Gallery of Art Sculpture in Washington D.C. Donald Judd’s, Untitled (79–40 Bernstein) work from 1979, is made from 10 rectangular units of galvanized iron lined beneath with transparent red plexiglass, the stack gleams with the shiny metal revealing a luminously scarlet plexiglass interior. This modular construction recalls the house of cards - a precipitous tower created from successive rows of stacked playing cards.

Childhood and the Passage of Life

Another highlight among the 9 works being shown inside is Damien Hirst’s (b. 1965) iconic This Little Piggy Went to Market, This Little Piggy Stayed at Home, made in 1996 and first exhibited in the landmark Sensation show held in 1997. The neatly dissected body of the pig, conserved in formaldehyde, is set in two boxes which slide past one another along a platform powered by an electric motor. With its playful appropriation of the children’s nursery rhyme, the work subverts the sweet verse with the artist’s characteristic, macabre aesthetic. The giant, fantastical sculpture by the Swiss artist Urs Fischer (b. 1973) Bad Timing Lamb Chop! is an iconic sculpture from 2004-5 by Fischer who is known for his transformation of the everyday object. Towering overhead, a collided cigarette pack and simple wooden chair are magnified to huge and inverted proportions. Like the small bottle labeled, ‘drink me’, with its heady effects on Alice, the visitor enters into a Wonderland where the staggering verisimilitude of Fischer’s sculpture leaves one happily disorientated.

Joana Vasconcelos’ 2012 Pavillon de Thé, is a 5 metre-high teapot, finely worked in filigree motifs. Conceived specifically for the Christie’s sculpture exhibition and one of Lord Rothschild’s favourite works, Pavillon de Thé presents a fantastical teapot, as if plucked from the March Hare’s tea party or purloined from Chardin’s Lady Taking Tea (1735). An exhibition of Vasconcelos’ work will be held in Versailles throughout the summer at the same time as the Waddesdon Manor show.

In Chardin’s masterful paintings, the artist beautifully illuminates the hand, celebrating its creative potential as it moves with agile, clean, dexterous movements to assemble a house of cards. In Bruce Nauman’s Untitled (Hand Circle) (1996), the artist undertakes a self-referential project, paying tribute in sculptural form by casting his own hands in solid bronze. Architecture of Space Untitled by Anish Kapoor (b. 1954) is an elegant monolith created in dialogue with the present exhibition and installed for the first time at Waddesdon. The dense black stone should not by rights reflect anything, light being absorbed by its cold, organic material. However, polished to perfection, the mesmeric totem interacts and reflects a space beyond its own materiality. Anish Kapoor was chosen as the artist for what will be the largest public sculpture in the country when his piece Orbit, is unveiled in the Olympic Park in time for the London 2012 games later this summer. Also made for the show is a three-part piece entitled Geometric Mirror A-C by Danish artist Jeppe Hein (b. 1974) using geometric shapes of polished stainless steel which mirrors its surroundings. Other artists represented include Antony Gormley, Robert Indiana, Xu Bing, Eva Rothschild, Tony Cragg, Ai Wei Wei, Bruce Nauman, Kader Attia, Alexander Calder, Beatrice Caracciolo, Eduardo Chillida, Wim Delvoye, Dan Flavin, Do Ho Suh, and Thomas Schutte.

Waddesdon Manor
Aylesbury, Bucks, HP18 0JH - Waddesdon
Opening times for the gardens, aviary, shops and restaurants including House of Cards in the gardens: Wednesday – Sunday (closed Mon & Tues): 10.00am -5.00pm.
Entry cost for the above from £6.50 - £20.50 depending on season and whether adult/child/family ticket. National Trust members go free.