Houses. The exhibition is the second one of two events devoted to the historic German artist, whose work is shown also - from 21 May to 23 September 2012 - at Castello di Rivoli. The curatorial project at Villa Paloma looks at the series of architectural models of his One Man Houses, together with a group of very recent, previously unexhibited works that investigate a number of themes dear to the artist, such as bunkers and temples. 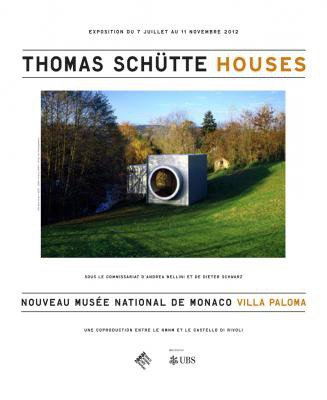 The Nouveau Musée National de Monaco presents the first exhibition of works by the German artist Thomas Schütte to be shown in Monaco from 7 July to 11 November 2012. The display, which is being installed at Villa Paloma in close cooperation with the artist himself, is curated by Andrea Bellini—former co-director of Castello di Rivoli, Turin, and recently appointed director of the Centre d'Art Contemporain Genève—and Dieter Schwarz, director of the Kunstmuseum Winterthur. Co-produced by the Castello di Rivoli, Museo d'Arte Contemporanea, Turin, this exhibition is the second one of two events devoted to the historic German artist, whose work is shown also—from 21 May to 23 September 2012—at Castello di Rivoli.

The curatorial project at Villa Paloma looks at the series of architectural models of his One Man Houses, together with a group of very recent, previously unexhibited works that investigate a number of themes dear to the artist, such as bunkers and temples. The Castello di Rivoli show, on the other hand, focus on the Frauen series—extraordinary figures of women whose bodies are subjected to spatial and organic deformations.

In 2003 Thomas Schütte assembled galvanised sheets made industrially for the manufacture of ventilators and created five model homes, which he called One Man Houses. The components, which were readily available on the retail market, were fairly simple: cylinders, cubes, and rhomboids of various sizes. The artist fitted them together to form small housing cells, with yellow, red, or white perspex panes as windows and doors. Schütte's work method was the one he had long accustomed us to: creating a formal repertoire, which might be larger or smaller, but basically leaving the work open. In these five different models, the opening onto the exterior is large, like a sort of big porthole. One might think that these houses were designed for a contemplative sort of person who loves looking at the landscape. Otherwise, except for these simple volumes, it is impossible to guess what the interiors are like. One year later, in 2004, Schütte worked on these five variations, making larger models in wood. This time he gave them a precise interior layout, even designing the furniture and fittings, from the beds to the sanitaryware, to the lamps and armchairs, right through to the kitchens and even, in some cases, the fireplace. What are these houses? Why are they made for a single person? And why should an artist create architectural models for at least three decades?

Though for different reasons, his One Man Houses constitute a turning point in relation to his previous architectural models. First of all, these models have been made gradually over the years, turning into real houses, which are no longer imaginary but which can be lived in. Secondly, as we have seen, the artist designs not only the interior structure but also the furnishings, right down to the smallest details. These One Man Houses still reflect a feeling of profound skepticism with regard to the world, and they are fundamentally homes for an individual person, and yet at the same time they also offer a concrete possibility for survival. The artist creates devices that allow the eye to go beyond, out into the surrounding environment. These are observatory-buildings through which one can enter into contact—and not only visually—with the world. His One Man Houses are camera obscuras that people can inhabit, placing their own point of view inside the perimeter of the construction. The German artist's models always maintain a very intimate, almost melancholy, if not tragic and dark, feel about them. His is fundamentally a "self portrait" style of architecture and thus also a "narrative" architecture, with almost diaristic overtones. This diary of the world in the form of architectural models necessarily acquires a political dimension, for it appears as a comment—often pessimistic and bitter—on contemporary society and on the mechanisms that make it work, also at the cultural level.

Two catalogues, Houses and Frauen, with critical essays by the two curators, Andrea Bellini and Dieter Schwarz, will be published by Richter Verlag and the NMNM on the occasion of the exhibitions.

Nouveau Musée National De Monaco is supported by the Government of the Principality of Monaco and UBS AG.