2 new series of photographs - 'Light Balances' and 'On Any Given Day in Spring' - by Robert Adams on show with Tony Smith's Source, a monumental sculpture, which Tony Smith first exhibited at Documenta IV in Kassel (1968). The sculptures Pollock made at Tony Smith's home in 1956, which are exhibited here for the first time, are constructions of wire, gauze, and plaster. 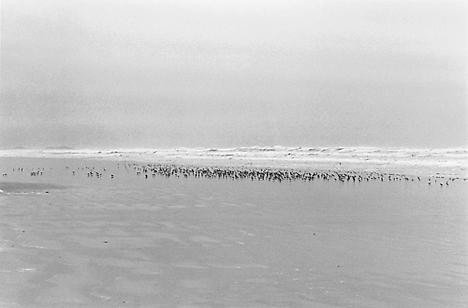 On Any Given Day in Spring and Light Balances

Matthew Marks is pleased to announce Robert Adams: On Any Given Day in Spring & Light Balances, the next exhibition in his gallery at 526 West 22nd Street.

The exhibition consists of two new series of photographs.

Light Balances is the title of a group of 59 photographs made between 2005 and 2011 in a protected forest around the Columbia River estuary near the town of Astoria, Oregon where Adams has lived since 1997. These dense black and white images capture the diverse qualities of light as filtered through and onto the leaves, trunks, grass, and dirt of the uncontaminated forest.

The 30 photographs in On Any Given Day in Spring depict flocks of seabirds on the North Beach Peninsula in Washington State. They were made between 2007 and 2009 and capture the relationship between the birds, the ocean, and the sky. Adams writes of his chance encounters with the birds, “There is no certainty, on any given day in spring, that the birds will be there.”

Two new artist’s books reproducing the photographs in On Any Given Day in Spring and Light Balances will be published to accompany the exhibition.

Robert Adams: On Any Given Day in Spring & Light Balances is on view concurrently with the artist’s, The Place We Live, a Retrospective Selection of Photographs at the Yale University Art Gallery in New Haven, Connecticut through October 28, 2012, which includes over 300 photographs made over four decades. After Yale, this exhibition, which has already been seen at museums in Vancouver, Denver, and Los Angeles, travels on to institutions in Spain, Germany, France, and Switzerland.

Robert Adams (b. 1937) has been photographing the American landscape for almost 50 years. His photographs emphasize the redemptive beauty of nature in the face of humans' widespread and unremitting use of the land. In 1989 the Philadelphia Museum of Art organized a retrospective of Adams's work, and in 1997 his photographs were included in Documenta X. Adams was awarded a MacArthur Foundation fellowship in 1994 and the Hasselblad Foundation International Award in 2009.

Matthew Marks is pleased to announce Tony Smith Source, the next exhibition in his gallery at 522 West 22nd Street.

Source, 1967, is a monumental sculpture, which Tony Smith first exhibited at Documenta IV in Kassel, Germany in the summer of 1968. Fabricated in steel and weighing over 12,000 pounds, this work is among Smith’s most dynamic large-scale sculptures. A key example of the painted black outdoor sculptures for which Smith is best known, this exhibition is the first time that Source is being shown in New York.

Smith came to sculpture late in life. Born in 1912, he supported himself and his family as an architect for twenty years but began to focus on painting in the mid-1950s, turning to sculpture later in the decade. Smith considered the issues of architecture, sculpture, and painting identical, befriending many of the leading practitioners of Abstract Expressionism in the 1940s and 1950s.

September 23, 2012, marks the one hundredth anniversary of Smith’s birth. Institutions around the world will celebrate his centennial with special events, including a daylong symposium at the National Gallery of Art, a panel discussion at the Seattle Museum of Art, and the exhibition Kiki Smith, Seton Smith, Tony Smith: A Family of Artists, which opens at the Kunsthalle Bielefeld, Germany, on September 23.

Sculpture
An Exhibition on the Centennial of their Births

Matthew Marks is pleased to announce Jackson Pollock & Tony SmithSculpture, the next exhibition in his gallery at 502 West 22nd Street. Pollock and Smith, both born in 1912, were colleagues and close friends and this exhibition celebrates the centennial of their births.

There are five small sculptures in the exhibition, all dating from the mid-1950s, including the last two sculptures Pollock made and three of the earliest Tony Smith sculptures. The Pollocks and one Smith were made on the same weekend in July 1956, in the backyard of Smith’s home, only weeks before Pollock’s death in a car crash on August 11.

Tony Smith and Jackson Pollock met in the late 1940s at the time Pollock was making some of his greatest paintings. While their work shares little stylistically, their many shared interests included Native American sand painting, modern architecture, and the writing of James Joyce, and they quickly became close friends. Pollock was a painter who loved to make sculpture and Smith was an architect who loved to paint and finally found his calling in sculpture.

The sculptures Pollock made at Tony Smith’s home in 1956, which are exhibited here for the first time, are constructions of wire, gauze, and plaster. Shaped by sand-casting, they have a heavily textured surface similar to what Pollock often sought in his paintings. The sculpture Tony Smith made the same weekend was created by pouring thin concrete into an egg carton. The resulting grid of geometric shapes relate both to his earlier Louisenberg paintings, and the hexagonal motifs in his architectural work. Smith’s 1954 wood sculpture, included in the exhibition, is one of the earliest examples of Smith’s sculptural work.