A growing list of artist talks, performances, and symposia planned in collaboration with arts organizations throughout Silicon Valley and beyond. Featuring artworks by over 200 artists from around the world, the Biennial is a dynamic network of more than 100 exhibitions, public art projects, and events taking place in 45 locations. Curated by Jaime Austin, Dooeun Choi, Gisela Domschke, Michelle Kasprzak, and Regina Moller. 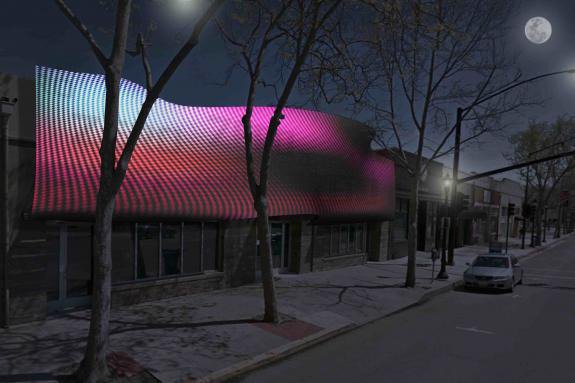 The 2012 ZERO1 Biennial proposes that contemporary art practice can re-imagine the place, the idea, and the experience of Silicon Valley. Featuring artworks by over 200 artists from around the world, the ZERO1 Biennial is a dynamic network of more than 100 exhibitions, performances, public art projects, and events taking place in 45 locations throughout Silicon Valley, the San Francisco Bay Area and beyond.

Echoing the ZERO1 Biennial's 2012 theme, the main exhibition, Seeking Silicon Valley, is on display at the ZERO1 Garage for the entirety of the Biennial, and will serve as the network hub for Biennial programming. The exhibition, co-curated by five international curators, features 24 artists representing 11 countries, and includes 12 new artworks commissioned for the Biennial.

In addition to more than 45 partnering arts organizations, including the San Francisco Museum of Modern Art, Berkeley Art Museum, San Jose Museum of Art, and Stanford University, the 2012 ZERO1 Biennial has expanded its network globally with two inter-biennial partnerships: Maurice Benayoun's Tunnels Around the World, a ZERO1 and Mediacity Seoul 2012 co-commissioned artwork connecting visitors at exhibition sites in San Jose and Seoul; and James Morgan's V2V project in the "Titanium Valley" Special Economic Zone connecting the ZERO1 Biennial to the Ural Industrial Biennial in Ekaterinberg, Russia.

The 2012 ZERO1 Biennial Lead Curator is Jaime Austin, Curator and Director of Programs at ZERO1.

About the ZERO1 Biennial
The ZERO1 Biennial, distributed throughout Silicon Valley and the greater Bay Area, is North America's most significant showcase of work at the nexus of art and technology. Through curated exhibitions, public art, performances, and events the ZERO1 Biennial presents work by a global community of innovative artists who are reshaping contemporary culture. Established in 2006, the ZERO1 Biennial has presented the work of over 500 artists from 50+ countries; commissioned 100 original works of art; attracted over 150,000 visitors from around the world.

A full list of Biennial programs is available at www.zero1biennial.org/programs