Art. Truth. Reality. The exhibition presents around 50 artistic approaches, illustrating the network of links between journalism and art, and the ways in which artists draw on media for their creative production. It includes an historical overview of the story of the newspaper both in and with art. Works by William Kentridge, Christian Boltanski, Nedko Solakov, Damien Hirst, Gilbert & George and many more. 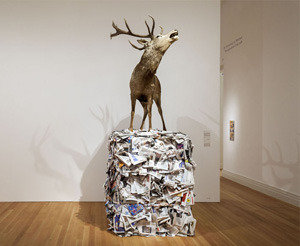 As a medium, the newspaper has been an object of art since the mid-nineteenth century. Whether as tool for enlightenment or as an instrument of manipulation, artists have drawn on the medium in a number of ways and for several reasons, and to which they ascribe varying degrees of meaning. The exhibition “ARTandPRESS. Art. Truth. Reality.” presents around 50 artistic approaches, illustrating the network of links between journalism and art, and the ways in which artists draw on media for their creative production.

The newspaper is considered the oldest information carrier and continues to be well-established among a broad public. And whereas a surge of radical changes has been brought about in the wake of media technologies, democracy, the modern state and present-day information society would be inconceivable without the newspaper.

A brief glance at the art history of the foregoing 200 years shows a close-knit relationship between art and press. Art and the newspaper share common features in their intention to enquire, to clarify and to challenge accepted norms. The claim to illustrate reality as authentically as possible – objectively, subjectively and as pure assertion – is the common endeavor connecting the activity of news production and artistic creativity. The press creates the public, and art needs the public. A dependency accorded the newspaper as a medium within art.

In addition to contemporary exhibits, the show “ARTandPRESS. Art. Truth. Reality.” also includes an historical overview of the story of the newspaper both in and with art. And yet, not by way of originals, but via iPad – a medium which, already functioning as a digital newspaper, may be described as one of the biggest competitors to the analog press. For its part, in the exhibition the iPad becomes a carrier of art information in both pictorial and interactive forms. The modern medium seeks to make access to the historical works easier for the visitors, and to show the relationship between newspaper and art.

The show consequently presents a broad spectrum of mediums: from classical painting and installations, object art and video through to cutting-edge forms of Internet communication. The exhibition “ARTandPRESS Art. Truth. Reality.” is a project sponsored by the foundation, Stiftung für Kunst und Kultur e.V. Bonn, and was first on show in Martin-Gropius-Bau, Berlin. Furthermore, at the ZKM | Museum of Contemporary Art a cabinet has also been installed in which one of Hans Richter’s works from the ZKM | Karlsruhe collection is presented, in which newspapers were also used as elements of collage.