The exhibition of works from the Guggenheim Museum Bilbao collection engages in a reflection on the concept of architecture and its ability to suggest a past or present created by us and our relationships with others. The show includes six works by five international artists that reflect on the occupation of space as a place of narratives that already exist or are on the verge of being created by the observer: Liam Gillick, Doris Salcedo, Cristina Iglesias, Mona Hatoum, and Pello Irazu. 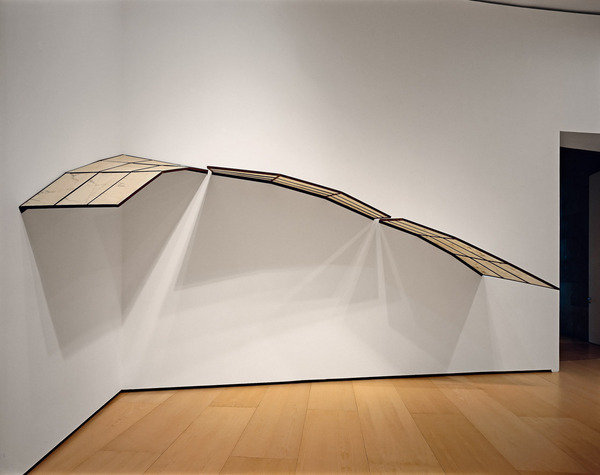 From September 20, 2012, through May 19, 2013, the Guggenheim Museum Bilbao is pleased to present Inhabited Architecture, a new exhibition of works from the Guggenheim Museum Bilbao collection that engages in a reflection on the concept of architecture and its ability to suggest a past or present created by us and our relationships with others. In this context, architecture is something that “embraces the consideration of the whole external surroundings of the life of man: we cannot escape from it if we would so long as we are part of civilization, for it means the molding and altering to human needs of the very face of the earth itself, except in the outermost desert,” as defined in 1881 by William Morris, lead proponent of the Arts and Crafts movement. From this perspective, architecture is much more than just buildings or inhabitable structures; it encompasses cities, streets, furnishings—in short, everything created by human hands.

The show includes six works from the Guggenheim Museum Bilbao collection by five international artists that reflect on the occupation of space as a place of narratives that already exist or are on the verge of being created by the observer.

Several pieces are making their public debut at the Guggenheim Museum Bilbao in this exhibition: How are you going to behave? A kitchen cat speaks (2009) by British artist Liam Gillick; Untitled (2008) by Doris Salcedo; Home (1999) by Mona Hatoum; and Life Forms 304 (2003) by Pello Irazu. These are accompanied by two pieces by Cristina Iglesias, Untitled (Alabaster Room) (Sin título [Habitación de alabastro]) from 1993 and Untitled (Jealousy II) (Sin título [Celosía II]) from 1997.

In Gallery 303 visitors will find the work How are you going to behave? A kitchen cat speaks (2009), originally produced for the German pavilion at the 2009 Venice Biennale by the British artist Liam Gillick (Aylesbury, 1964) and donated to the Guggenheim Museum Bilbao. The installation consists of a series of pinewood kitchen cabinets inspired by the famous Frankfurt Kitchen, which the Austrian architect and anti-Nazi activist Margarete Schütte-Lihotzky designed for a subsidized housing project in the 1920s. In this work, Liam Gillick evokes the modern utopian dream of universal access to upscale design and the contemporary discourse on inhabitable space, recurrent themes in the artist’s career. Inside the installation, a stuffed cat speaks to the observer about encounters, relationships; utopia and melancholy; dreams and disappointments; the passage of time and transformation, flooding the exhibition space and the spectator’s mind with sound.

Gallery 302 contains two works by Cristina Iglesias and the sculpture Untitled (2008) by Doris Salcedo (Bogotá, 1958). The Colombian artist’s piece is part of a series-in-progress begun in 1989, the largest produced by Doris Salcedo to date. In this vast array of assemblages, the artist uses home furniture to explore the turbulent political history of her native Colombia; as the artist reminds us, “Every piece I have created up to this point contains first-hand evidence of a real victim of the war in Colombia.” In the work by Doris Salcedo, well-worn pieces of furniture are combined in a hybrid, dislocated fashion, and their cavities and fractured surfaces are covered with concrete. Thanks to their material qualities, the resulting shapes become mute witnesses to traumatic experiences, both personal and collective.

Opposite this piece we find the 1997 work Untitled (Jealousy II) (Sin título [Celosía II]) by the Basque artist Cristina Iglesias (San Sebastián, 1956), which offers a reinterpretation of the typical lattice screen (celosía) found in Catholic confessionals or Muslim seraglios and perverts its original purpose by making this sculptural object uninhabitable, and therefore proposing a deserted, one-directional vision from the outside in. These limitations make us uncomfortably curious, suggest the absence of human intervention and, as the dual meaning of the title indicates (celosía is the Spanish word for both lattice and jealousy), speak to us of unfulfilled desires, misgivings and restless stirrings, and unrequited longings. Cristina Iglesias gives these lattices a quasi-primitive quality, with a finish reminiscent of the most natural structures, but she also uses them to conceal fragmented words which we strive to imbue with meaning, a history or a past, even though our expectations may be dashed once again. This is an architecture that cannot be inhabited but is defined precisely by personal histories and unfulfilled desires. Another piece by Cristina Iglesias from 1993, Untitled (Alabaster Room) (Sin título [Habitación de alabastro]), is suspended from the wall and presents an open, translucent architecture under which spectators are sheltered by the consistency and fragility of alabaster. This delicate yet sturdy refuge situates us in relation to our environment, modifies it, and is in turn modified by the surrounding conditions; the only limitation is that imposed by our own personal history.

The work Home (1999) by British of Palestinian origin artist Mona Hatoum (Beirut, 1952), which occupies Gallery 301, consists of a large table strewn with various cooking utensils attached to each other by metal clips and wires plugged into an electrical outlet. A computer program causes the electrical current to turn on several small light bulbs hidden beneath some of the objects, which shine with variable intensity and frequency, while speakers amplify the humming noise that this circuit emits. The entire installation is fenced off by a series of horizontal steel cables that separate the audience from these potentially lethal objects. In this installation, as in other pivotal examples from her earlier and later oeuvre, Mona Hatoum generates an unsettling, menacing scene that contrasts with the image of comfort and safety usually associated with the domestic space, thereby underscoring a constant in her work: the desire to trigger an emotional response in the spectator by creating environments that are halfway between attraction and repulsion, between the familiar and the bizarre.

Finally, the Gipuzkoa-based artist Pello Irazu (Andoain, 1963) transforms the exhibition space with his Life Forms 304 (2003), incorporating the architecture of Gallery 304 into the installation by means of a pentagram-like mural painting that envelops us and alters our perception of the space. Meanwhile, the built object standing in the center of the gallery becomes an impenetrable, seemingly unstable shelter in which the combination of different materials and colors gives the impression that we are witnessing a deconstruction in preparation for rebuilding, the recycled materials of previously inhabited spaces or architectures.

By examining the work of five pivotal artists in the Guggenheim Museum Bilbao Collection, this exhibit offers visitors a chance to reflect on space and its occupation through experience, history, or personal relations. All architecture has its history—a history of the domestic or the public, of man in isolation or as part of a group, but always a history of transiency, of something experienced or staged at a specific moment in time, or that is about to unfold before the visitors’ eyes.

Educational Spaces
The exhibition is accompanied by selected audiovisuals which can be viewed in the corridor leading out of Gallery 303. The aim of these materials is to illustrate the creative careers of the five artists featured in the show and reveal the earlier practices that led up to these works. The personal reflections of Liam Gillick, Mona Hatoum, Cristina Iglesias, Pello Irazu and Doris Salcedo will be revealed in the contents displayed on each screen. The relationship between architecture and history—whether individual or collective, past or present—and the personal reactions of visitors who have experienced the pieces and the spaces they occupy are some of the keys to understanding the works on display.