'Systems and Patterns' attempts to show, through a small sampling of works - the crucial dilemmas involved in the representation of the Middle East, both on the part of the creators of images and on the part of their users. Dusan Pirih Hup from the Collection of MGLC: the 23 prints in the exhibition were created following the photographs of the artist's travels through Turkey and the Middle East during 1982-1997. 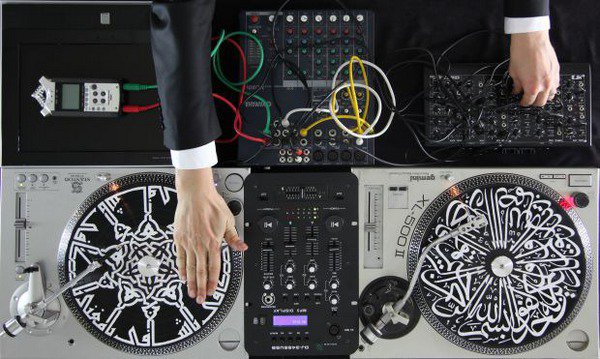 The exhibition Systems and Patterns attempts to show, through a small sampling of works – the crucial dilemmas involved in the representation of the Middle East, both on the part of the creators of images and on the part of their users. The representation ranges from secularized cosmopolitan images of the Middle East to a renewed consideration of, and even an insistence on nurturing, local cultural traditions and religion. Preconceived and stereotypical ideas about Middle Eastern contemporary art do exist, although in a much more sophisticated way, even in the system of contemporary art. The exhibition intentionally avoided the topical art of the Arab Spring and focused on questions relating to artistic universality.
At the same time, the exhibition Systems and Patterns is a presentation of contemporary Middle Eastern art in its connection with the history of the Biennial of Graphic Arts in Ljubljana. As a museum that specializes in the art of printing and printmaking, the International Centre of Graphic Arts is also the producer of the biennial. Founded in 1955, at a time when the former Yugoslavia occupied a unique geopolitical position, the Ljubljana biennial quickly established itself as an event that, very early on, transcended the Eurocentric perspective by showing art production from the so-called Third World, and especially from the non-aligned countries – including artists from the Middle East. From its beginning and almost to the end of the 1990s, the biennial was committed to the universalist modernist paradigm. Even a cursory inspection of the artworks sent by Middle East artists to the Ljubljana biennial reveals the predominance of modernist forms and artistic subjectivism over Orientalist notions. With the changes in the social and political situation, the modernist paradigm has been replaced by globalism and transnationalism, while painting, sculpture, and printmaking have been overshadowed by contemporary discursive art practices but the question of artistic universalism remains pertinent even today.

The show presents artists whose works are marked by an intriguing tension between contemporary universalism and their own heritage, which is defined by the political, social, and cultural specifics of the Middle East. The “systems” here are both systems of representation and individual artistic systems. The “patterns” are ornaments, repetitive motifs, and basic visual elements, which form the building blocks of seriality, repetition, symmetry, and geometricism. Behind the repetition of decorative forms, we find messages that underscore the complexity of the current social and economic existence. Realizing that, previously, artists from the Middle East have been presented in Slovenia either in the context of the Biennial of Graphic Arts or, in the past decade, as individual artists shown primarily in the transnational context of contemporary curatorial exhibitions, this selection tries to encompass a number of very different artistic languages in a broad spectrum ranging from contemporary documentarism to traditionalism, or in the relationships between these two extremes.

The exhibition is accompanied by a lively interdisciplinary programme and a bilingual (Slovene and English) catalogue with the essays by Nevenka Šivavec and Nat Muller.

There will also be a special screening of videos on October 25 at 7 pm: House Arrests: Tales of the Hidden Inside, curated by Nat Muller, featuring works by Akram Zaatari, Vartan Avakian, Taysir Batniji, and Larissa Sansour.

Invitation to Tea
Concealed in hospitality is the love for the guest. This is why we are inviting you to tea on every Tuesday, between 16.00 and 18.00 during the show’s opening hours at MGLC, in cooperation with the LAZIZ Egyptian restaurant, free admission

Istanbul − Isfahan
Dušan Pirih Hup from the Collection of MGLC

Dušan Pirih Hup (1952–2008) was a traveller, a passionate lover of Turkey and the Middle East. The areas of his activity included painting, photography, spatial and sound projects, theatre and, after 1995, almost exclusively photography, photomontage and the transfer of photography into the graphic medium. In the field of photography, Hup was active as a researcher, adding a new dimension to the medium. He printed his photographs with the scenes from his travels by using a combination of graphic techniques, his characteristic photocopies and inkjet prints. The twenty-three prints in the exhibition were created following the photographs of the author's travels through Turkey and the Middle East during 1982–1997, with most depicting figurative scenes of everyday urban life.

Dušan Pirih Hup – renowned as one of the most striking figures on the Ljubljana art scene – was actively involved in art from the 1970s. The areas of his activity included painting, photography, spatial and sound projects, theatre and, after 1995, almost exclusively photography, photomontage and the transfer of photography into the graphic medium. He was a member of the Union of Slovene Fine Arts Associations (ZDSLU), a founding member of TDS Equrna, a member of the Predrazpadom (Before-the-Breakup) street theatre, Papa Kinjal Banda, he participated in the Hidrogizma project as well as the Ana Monró Theatre. He established the Photographic Workshop at KUD France Prešeren in Ljubljana and was the author of several photography education programmes.
Already from the outset, Dušan Pirih Hup devoted himself to painting and photography alternately, whereas his focus of the last fifteen years was set primarily on expressing himself through the photographic image and its transfer into contemporary graphic techniques. After 1993 he used computer technology in the production of his work. In the field of photography, Hup was active as a researcher adding a new dimension to the medium. When shooting, he exclusively used a single lens of his own design. He created a number of digital and digitized photographs, photocopy prints and ink jet prints by using this approach. He published his works in the form of visual, textual and audio web editions. He wrote about the process of upgrading his photographs with printmaking, of the fact that he repeatedly strove to achieve that perfect copy, and spoke about his prints with confidence: seeing them as the works of a mature artist. Hup was of course creatively active at a time that was intensely characterized by the mass use of new photocopying techniques, the relationship between the original and the copy, the issues of the far-reaching implications and effects of the separation between the creator's "handiwork" and the technical implementation of the project.

Dušan Pirih Hup was a sworn figurative artist. The exhibited works are a subtle record of the events of everyday life and scenes that are typical for the cities of the Middle East: the hustle and bustle of transport, ports, railway stations, street trading, parks, rest areas, tea rooms, washrooms, oratories, wells and fountains, fences, walkways, entrances to buildings, etc. His photographic/graphic works surpass the basic function of documenting events; they appear visually powerful and timeless.

The exhibition is accompanied by a catalogue that provides an overview of the exhibited works and an accompanying text by dr. Primož Lampič. It was edited by the exhibition curator, mag. Breda Škrjanec

Supported by: Ministry of Education, Science, Culture and Sport of the Republic of Slovenia; City of Ljubljana. Media sponsors: Media-Bus; Tam-Tam.

We are cordially invited to the opening of two exhibitions on Friday, 28 September, at 7 pm. The exhibitions will be opened by Mr. Zoran Janković, Mayor of the City of Ljubljana.