Elzen's project Mary Wollstonecraft's Scandinavian journey 1795 re-traced (2008-2012) asks questions regarding what alternative history writing could be and suggests a less linear relationship to the past. It takes its point of departure in Wollstonecraft's travelogue Letters written during a short residence in Sweden, Norway and Denmark from 1796. 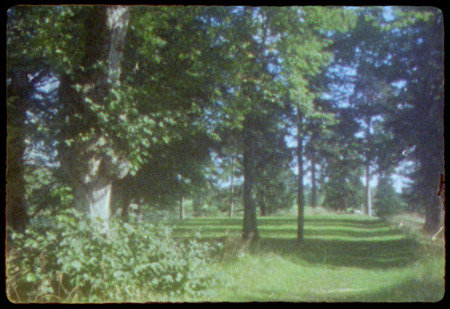 For the project Åsa Elzén presents in her solo exhibition at uqbar project space, the artist followed the tracks of feminist theorist Mary Wollstonecraft (1759-1797), author of A Vindication of the Rights of Woman, by many considered to be the founding text of Western feminism.

Elzén’s project Mary Wollstonecraft’s Scandinavian journey 1795 re-traced (2008-2012) asks questions regarding what alternative history writing could be and suggests a less linear relationship to the past. It takes its point of departure in Wollstonecraft’s travelogue Letters written during a short residence in Sweden, Norway and Denmark from 1796. The book is written in epistolary form during Wollstonecraft’s journey in Scandinavia the summer of 1795.

Åsa Elzén “re-traced” Wollstonecraft’s journey – physically, but primarily through the many biographies written about Wollstonecraft. The result is Who Fooled Whom?, a text piece in book form, that in chronological order cites 28 different accounts pertaining to the actual reason for Wollstonecraft’s journey in Scandinavia – her search for a ship with a silver cargo. During the 217 years that have passed, different theories have been put forth about the disappearance of the ship but the case is still not solved. The first citation in the book is from Wollstonecraft’s own travelogue, where the silver ship is not mentioned at all, but can be sensed in her critique of commercialism. Most biographers have chosen to concentrate on the unhappy love affair that Wollstonecraft was involved in during the trip, rather than bring to the fore Wollstonecraft’s critique of capitalism. Other authors concentrate only on the Silver Ship, a story that came to live its own life in Norway, where for a long time divers searched for its silver treasure on the bottom of the sea.

At uqbar, Åsa Elzén presents this text collection not only in book form but also as part of a wall drawing, along with a video and a glas goblet with the titel The Glade. In the video a voice-over describes how Wollstonecraft engraved her name with a diamond on the glass windowpane of a small hut standing in a glade by Bogstad Estate outside Oslo. The hut was demolished in the 1850s and the only still existing image of the hut is engraved in glass, on the so called Bogstad Goblet. The glade still exists today and functions in Elzén’s video as an empty stage where two different versions of the past are played out.

As a further element of her account the artist presents a glass that resembles the Bogstad goblet. In contrary to the original Elzén’s reformulation of the glas shows an empty glade and a quote from Wollstonecraft: "I am going to be the first of a new genus – I tremble at the attempt".

For further information on the artist and her work see: www.asaelzen.com