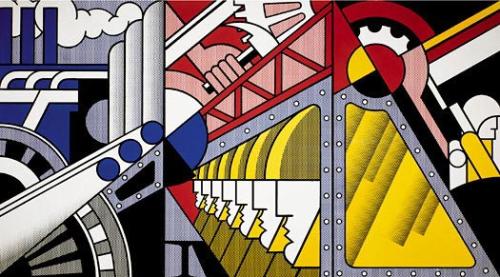 The decade of the 1960s was perhaps one of the most provocativeâ€”culturally, politically, and philosophicallyâ€”of the 20th century. The amazing growth that transpired in America from the end of World War II through the cold war period of the 1950s resulted in a newly formed consumer culture. America had become an industrialized society poised on the brink of the information age.

A number of the artists who emerged, or, more appropriately, burst upon the art world, particularly in New York and Los Angeles, in the first years of the decade were responding to this new commercialism. Indeed, those who came to be identified as Pop artists embraced consumerism as a fitting subject of their art. Expression and gestureâ€”hallmarks of Abstract Expressionism, which preceded Pop in the late 1940s and early 1950sâ€”were replaced with cool, detached, mechanical illustrations of common objects, often based on appropriated advertising images. Pop art was in fact proposing a new kind of subjectivity, one that did not rely on an artist's singular expressive gesture. While many of the Abstract Expressionists had turned hermetically inward, the Pop artists turned outward for aesthetic stimuli. Radically redefining the subject matter deemed suitable for aesthetic use, Pop art was a significant sociological phenomenon and a mirror of society.

In turn, the consumer industry itself adopted Pop art as an antidote to the rigidity of high art. Pop, which came to encompass the fields of music, consumer design, and fashion, corresponded to an entire way of life among young people in the 1960s.

In Pop art, the narrative or epic impulse of Abstract Expressionism was replaced with straightforward depictions of the everyday, and the mass-produced was afforded the same significance as unique works of fine art. Basing their techniques, style, and imagery on certain aspects of mass reproduction, media-derived imagery, and consumer society, Pop artists gleefully eroded the gulf between high art and low art, taking inspiration from advertising, pulp magazines, billboards, movies, television, comic strips, and shop-window displays. These images, presented withâ€”and sometimes transformed byâ€”humor, wit, and irony, may be read as both an unabashed celebration and a scathing critique of popular culture.

American Pop Icons features 28 paintings and sculptures from eight of the most important precursors and participants in the Pop art movementâ€”Jim Dine, Jasper Johns, Roy Lichtenstein, Claes Oldenburg, Robert Rauschenberg, James Rosenquist, Andy Warhol, and Tom Wesselmann. This concise overview takes as its point of departure the Solomon R. Guggenheim Museum's seminal 1963 Pop exhibition Six Painters and the Object, organized by British art historian, curator, and critic Lawrence Alloway. For the present exhibition, Oldenburg and Wesselmann have been added to Alloway's original group of six. The 1963 exhibition at the New York Guggenheim brought Pop art to a broader audience. That same spirit is unmistakably present in American Pop Icons, which showcases Pop art acquisitions made by the Guggenheim since that time. In addition, important loans drawn from one of the most important Pop-art collectors and gallerists, Ileana Sonnabend, as well as loans from institutional and private lenders in the U.S. and Europe, are included.

The term "Pop art" was first used in print by Alloway in 1958 to characterize the manifestations of popular culture (television, advertising, billboards, magazines) that were considered inferior to high culture. Prior to Alloway's Guggenheim exhibition, the art world of the 1960s was struggling to properly identify the new aesthetic it found itself confronted with. The speed with which Pop art excited the popular imagination was commensurate with the very brief period of time in which it initially flourished (1960-64). Contrary to the adage that most great art is ignored for years, this new art quickly sparked so much interest and enthusiasm from critics, collectors, and gallery owners that even its moniker was much debated: New Realism, Popular Image Art, Common Object Art, Factualism, Neo-Dadaism, American Dream Painting, Sign Painting, Anti-Sensibility Painting, and Cool Art were just a few names put forth in an attempt to label the new art. "Pop art" won out, being a shorthand for popular culture that then evolved to describe the artistic expressions of that culture.

Developing his style in the early 1950s, Rauschenberg proposed an alternative to the prevailing mode of art making in the U.S. Using a collage technique employing popular imagery, the diverse objects of Rauschenberg's celebrated Combine paintings fused two-dimensional painting with sculpture. Working at the same time, Johns, playing on illusion and reality, repainted beer cans, targets, and the American flag, objects so iconic and commonplace that they required a new set of criteria to be viewed as artworks. The flag, in particular, became emblematic in Johns's practice, and he has returned to it on many occasions, changing or manipulating the color and rendering its image in various mediums, from graphite to ink and even bronze.

The unique approach to the object that these two artists developed paved the way for the Pop artists in the next decade. In the tradition of Rauschenberg's Combines, Jim Dine's canvases often feature actual objects such as tools, bathroom fixtures, and real or depicted articles of clothing. These items were frequently the artist's personal possessions. For Shoe (1961), Dine focused on a brown-and-white oxford to evoke the elegant attire of Fred Astaire admired during the artist's youth. In 1961 Claes Oldenburg opened The Store. This large-scale environment contained colorful plaster sculptures of shirts, ties, dresses, and food, all of which were sold as merchandise from a storefront on the Lower East Side of Manhattan. Oldenburg continued his exploration of common everyday objects in his soft sculptures, reconfiguring food items, such as a hamburger and an ice-cream cone, and mechanical devices like telephones and typewriters, into uncanny, often humorous sculptural forms.

Many of these artists used commercial techniques and the language of advertising and mass media in their work. In the late 1950s, James Rosenquist supported himself as a billboard painter. He adapted the techniques of enlarging photographic images on a colossal scale to his enigmatic, large-scale montages of images derived from mass culture. The billboard aesthetic also informs Wesselmann's Still Life #33 (1963), which despite its grand scale is meant to be read as a group of objects on a tabletop. The gleaming portion of sandwich, towering beer can, and pack of cigarettes stand firmly if somewhat ironically as monuments to consumerism. Lichtenstein said of Pop art, "There are certain things that are useable, forceful, and viable about commercial art." His paintings based on comic-book illustrations and use of simulated Benday dots to suggest cheap printing acknowledge the role of popular forms, but Lichtenstein often included references to art history in his works, as in his large-scale Preparedness (1968), which suggests the machine paintings of Fernand LÃ©ger and the WPA murals of the 1930s. Similarly intrigued by mechanical printing techniques, both Warhol and Rauschenberg began to experiment with the processes of photo silkscreening around 1962. In works like his monumental Barge (1963), Rauschenberg exploited the imperfections of the silkscreen process and added gestural elements of paint to assert their handmade nature. Warhol used found printed material from newspapers, advertisements, and publicity stills as subject matter, reproducing the same images repeatedly in different colors and sizes. He was particularly fascinated with contemporary icons like Jackie Kennedy, Marilyn Monroe, and Elizabeth Taylor. His many portrayals of them comment on the American fascination with celebrity as well as the artist's own life-long obsession with fame.

As a self-contained movement Pop art had dissipated by the end of the 1960s. The current work of many of its early practitioners has moved away from purely Pop statements, but continues to provide lively commentary on contemporary culture. Forty years ago, when Pop art was still considered a bold presence in a fine-art museum, the Guggenheim staged Six Painters and the Object, validating the movement at a critical juncture. In turn, it demonstrated the museum's leadership in establishing artistic trends. Forty years later, American Pop Icons celebrates that continuing tradition. â€”Susan Davidson