British Painting Today. The exhibition features works by 12 major artists from the middle and younger generation working in the UK. The show presents a specifically-composed and interconnected selection of works produced over the course of approximately the last ten years. 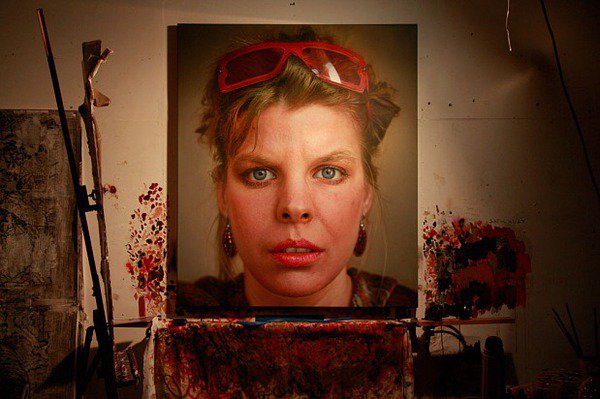 Galerie Rudolfinum presents a unique representative showcase of contemporary British art. The exhibition features works by twelve major artists from the middle and younger generation working in the UK.

Reflecting reality through its imaging is essentially the basic premise for painting in general. The form, method, content and reason for making the depiction are at least one level below. Yet the question today is not whether you can actually depict reality, because there is a plethora of ways to effectively deal with this task, but rather the question is why we ever bother creating such images. Another important decision is which segments of reality, whether tangible, visible or only conceivable, can even be displayed.

There are many ways to cope with such a task. One way leads over the surface of things and what is its most accurate depiction. The second is a path through a tangled web of references to previous paintings and their contexts, which provide unbelievable amount of space for a combinatorics of facts and myths that can be endlessly woven and developed. Both of these paths have their own laws, limits and charms.

The paintings of the twelve contemporary British artists provide outstanding and very distinctive answers to the aforementioned questions. The exhibition, conceived directly for the characteristic spaces of Galerie Rudolfinum, presents a specifically-composed and interconnected selection of works produced over the course of approximately the last ten years.

All of the aforementioned artists try to conceptualize reality through the smooth surface of veristic painting, which admittedly comes from photography. In this way they are able to break into fiction - the illusory world of discontinuous realities - of which the one on the surface, through all of its traceable connection to concrete reality, is also a gateway or window to a world outside of time with an evocation potential that breaks the possible references to the here and now. It is evident that the invention of photography largely rid painting of the historical need to come to terms with seen reality, the need to constantly return to narrative realism and the attempt to create as faithful representation as possible.

On the other hand, thanks to the photograph, painting again came to the fore and, as individual quality, it is able to be the bearer of many meanings; something which could not be achieved or accented using other methods of depiction.

Working with the reality of painting, i.e. with a work of art as the starting material and stimulus for a motivic combinatorics emerging into multiple-layer stories with a rich network of references from various levels of European cultural memory is based on a firm belief in a shared and constantly intelligible content of highly-knowledgeable painting; painting which is firmly ingrown in the European tradition of pictorial work with ancient references developed over centuries using an entire apparatus of stories, myths, richly structured iconographic diagrams and narrative practices.

For the creations of the second group of artists, i.e. Glenn Brown, Ged Quinn, Mathew Weir and Jake and Dinos Chapman, ties to the past are crucial on the fundamental axis of lasting value, which, through their connection to today are made present and enriched by other contexts. Drawing from the history of European painting means touching on classical painting, which worked not on the basis of realism or efforts to truly capture the world as it is, but rather it captured and constituted thoughts about the world by depicting some relatively precise observation of fragments of reality.

All of the participating artists work with layering the reality of paintings, the richness of the contextual framework, with different ways of painting work on an image, often a very sophisticated structure of references and meanings with a refinement worthy of a Persian painter of miniatures. All of them work with paintings with belief in the possible continuation of the history of art, recognizing the validity of depiction as on what is - thus far - an uninterrupted axis of its historical development.

Virtually all of the artists represented at this exhibition construe images of a new reality in their studios. This new reality through the credibility given by its high quality, mostly illusionary painting, not only faithfully imitates reality, but it is through this fidelity that they provide insight and guide to a world outside reality. This is a world that may be imaginary or sensed, but also often seen either in a dream, in everyday reality, or even in old art gallery; a world that has more than a superficial dimension of a mechanically trapped surface, easily offered for consumption; a world that is often a very complex, intellectual structure based on creative thinking about the world and providing space and incentives for richly-structured thinking about reality in details and units, and possibilities of exceeding them.

The Galerie Rudolfinum education department is preparing a series of accompanying programs for the exhibition, which it will offer as interpretative information from the mouth of curators and art historians, as well as testimonies from the artists themselves. A separate event will be an educational program for schools of all levels, which will include worksheets, workshops and lectures within the exhibition.