Deep Into Russia. The exhibition is the artist's first solo show in the UK presenting the sculptor, photographer and curator's practice since the 1990s. With an increasing focus on ecological and biological issues Kulik's work today is even more urgent and prescient, albeit no less shocking, than ever. 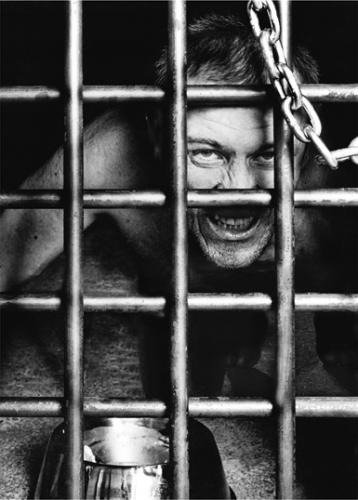 Regina Gallery is pleased to present Deep Into Russia, a solo show by Oleg Kulik. The exhibition is the a!ist's first solo show in the UK presenting the a!ist's practice since the 1990s. As pa! of the exhibition Kulik will re-enact one of his early performances 'Missionary' (1995) on the opening night.

Sculptor, photographer and curator, Oleg Kulik is best known for his tribal performances as a 'man-dog', which explore the physical and emotional relationships between man and beast, evoking the immemorial dualism between culture and nature. The enfant terrible of Russia's contemporary a! world gained international notoriety in the mid 1990s when his canine alter ego shocked audiences during performances in Zurich and Stockholm. Memorably, Kulik performed 'I Bite America and America Bites Me' (1997) for an exhibition in New York during which visitors were invited to enter a cage where the naked and unchained Kulik would interact with them in unpredictable and surprising ways.

Kulik's performative a! practice emerged out of the bleak and brutal socio-cultural environment of post-Soviet Russia. As an 'a!ist- animal' Kulik challenges common notions of what it means to be a human being and fathoms the possibility of an alternative consciousness by taking on the persona of a cockerel, dog or bull. The regression into an animalistic state of mind allows the a!ist to act out a human primitiveness commonly deemed unacceptable in today's society. Living out this so-called 'zoophrenia' – a condition bearing symptoms of schizophrenia and zoophilia – Kulik exposes the animality of mankind and the fallacy of the concept of human supremacy.

According to the a!ist: “The fundamental problem of the modern world is the conflict between the modern culture and nature. The human being has conquered nature which now only remains as trophies in zoological museums. Such are the consequences of the modern civilisation. I refuse to get to know the nature only through exhibits at zoological museums. I see my task in this project as to reveal the animalistic origins in every human being.”

Ove!ly sexual in content and politically charged, the images that Kulik produces must not be seen as crude provocation but a means to create a feeling of unease among viewers with the aim to incite a strong emotional and intellectual response. With an increasing focus on ecological and biological issues Kulik's work today is even more urgent and prescient, albeit no less shocking, than ever.

Oleg Kulik was born in 1961 in Kiev, Ukraine. He was curator for several of the first exhibitions at Regina Gallery in 1991-1993, before pursuing his own solo a!istic career. Since then his one-person shows have included 'Oleg Kulik: Chronicle 1987-2007' a retrospective of his work at the Central House of A!ist, Moscow (2007) and 'Deep into Russia' at the Stedelijk Museum voor Actuele Kunst, Gent (2001). Group shows have included 'Origin of the Species: A! in Epoch of Social Darwinism' at the The Museum of Modern A!, Toyama; 'RUSSIA!' at the Guggenheim Museum, New York (2005); and 'Manifesta 1' at the V_2 Institute, Ro"erdam (1996). From 2009 the a!ist has worked as director for several operatic productions including Handel's Messiah at the Théâtre du Châtelet, Paris (2010).

WARNING: THE EXHIBITION CONTAINS SUBJECT-MATTER OF A GRAPHIC SEXUAL NATURE THAT SOME VIEWERS MAY FIND UPSETTING