A group exhibition, with the work of artists spanning from the 19th to the 21st centuries, that explores art as a speculative science, investigating principles more commonly associated with scientific or mathematical thought. The project suggests that art is itself an account of the world, and can expand the potential of investigative and experimental activity. 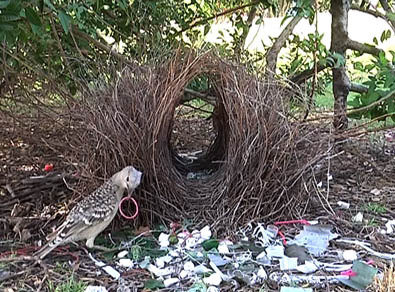 The MIT List Visual Arts Center presents In the Holocene, a group exhibition on view from October 19, 2012, to January 6, 2013, that explores art as a speculative science, investigating principles more commonly associated with scientific or mathematical thought. Through the work of artists spanning from the 19th to the 21st centuries, the exhibition proposes that art acts as an investigative and experimental form of inquiry, addressing or amending what is explained through traditional scientific or mathematical means: entropy, matter, time (cosmic, geological), energy, topology, mimicry, perception, consciousness, et cetera. Sometimes employing scientific methodologies or the epistemology of science, other times investigating phenomena not restricted to any scientific discipline, art can be seen as a form of investigation into the physical and natural world. In this sense, both art and science share an interest in knowledge and phenomena, yet are subject to different logics, principles of reasoning, and conclusions. In the Holocene suggests that art is itself an account of the world, and can expand the potential of investigative and experimental activity.

Emblematic of the central premise of the exhibition, Germaine Kruip’s film Aesthetics as a Way of Survival (2009) documents the phenomenon in which the male bowerbird arranges colored objects as part of its courtship display, suggesting an aesthetic faculty at work even within evolutionary behavior. Friedrich Fröbel devised a pedagogical system centered on childhood learning through color and form. Helen Mirra’s sculptures address geological time and extremophile forms of living matter. Robert Smithson’s interest in crystallography and entropy are reflected in both his Four-Sided Vortex (1965) and Partially Buried Woodshed (1970). Daria Martin’s Sensorium Tests (2012) revolves around a recently recognized neurological condition called “mirror— touch synaesthesia.” For FT Marinetti, abstract mathematical objects could stimulate in his readers the subjective experience of the sounds, smells, and motions of modern life; Iannis Xenakis’ Diamorphoses (1957) and Mycenae Alpha (1978) utilize mathematical operations as compositional strategies for creating music. Alfred Jarry’s “pataphysics,” John Latham’s “Time—Base Theory,” and João Maria Gusmão and Pedro Paiva’s “Abyssology” are all examples of speculative systems of knowledge constructed by the artists to address gaps in historical, philosophical, and scientific discourse.

In the Holocene features a number of works that extend out and beyond the gallery space. Mario Merz’s Fibonacci Sequence (2002), a series of ten neon numbers installed along the edge of the roof of the List Center will be seen by pedestrian traffic on Ames St. Ben River’s film installation Origin of the Species (2008), sited in the atrium lobby incorporates a dwelling assembled from discarded and reclaimed building materials with a film portrait of an elderly man who devises his own technologies for day-to-day subsistence while pondering the workings of the universe and the scope of human knowledge. The lobby space will also include a newly commissioned text based work by Lawrence Wiener.

The title of the exhibition is drawn from Max Frisch’s 1980 novella, Man in the Holocene, in which an aging narrator gathers selections from books and encyclopedias, preserving human knowledge as a deluge threatens to destroy his village. Of particular interest to the narrator is knowledge about our geological present, the Holocene, starting with the last Ice Age and which includes the development of human culture. The Holocene is thus our period of geological time, in which we attempt to understand the physical and natural laws of the universe and the origins of life, while also coping with the significant extent of our own impact on the Earth's ecosystems.

In the Holocene is made possible by an Emily Hall Tremaine Exhibition Award. Additional support for this exhibition has been generously provided by the Council for the Arts at MIT, the Massachusetts Cultural Council, the Office of the Associate Provost at MIT, with special thanks to Centre Iannis Xenakis, the MIT List Visual Arts Center Advisory Committee, and the Friends of the List.

The MIT List Visual Arts Center is located in the Wiesner Building, 20 Ames Street, at the eastern edge of the MIT campus. It is in close proximity to Kendall Square, Memorial Drive, and the Longfellow Bridge.
Gallery Hours: Tues-Wed: 12-6PM; Thurs: 12-8PM; Fri-Sun: 12-6PM; closed Mondays and major holidays.
Free and open to the public