Alone And Together. Spanning Bourgeois's seven-decade career, the exhibition includes work from across her diverse oeuvre. From her sensuous bronze and marble works to hanging aluminum sculptures, from her 'Cell' installations to her soft sculpture works, from her iconic spider sculptures to the evocative series of 'feathery' gouache diptychs on paper for which the exhibition is titled. 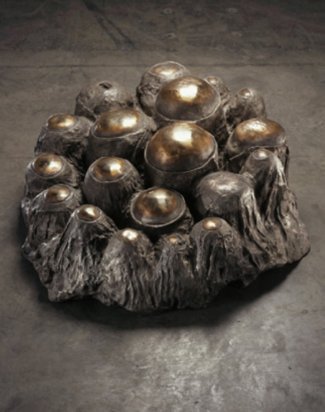 Faurschou Foundation is pleased to present Louise Bourgeois: Alone and Together, curated by Jerry Gorovoy, opening on 27 October, 2012, in the 798 Art District of Beijing. Considered one of the most important artists of the twentieth century, this will be Bourgeois's first retrospective exhibition in China.

Spanning Louise Bourgeois's seven-decade career, the exhibition includes work from across her diverse oeuvre. From her sensuous bronze and marble works to hanging aluminum sculptures, from her "Cell" installations to her soft sculpture works, from her iconic spider sculptures to the evocative series of "feathery" gouache diptychs on paper for which the exhibition is titled. A fiercely intelligent, well-read artist for whom the making of art was as much a means of 'being in the world' as a vocation, Bourgeois drew heavily on psychoanalytic thought. Performing uncanny exorcisms, she navigated the labyrinths of her past and her unconscious through her creations. Through the spinning of metonymical visual narratives, Bourgeois's work forms a web of stories about her life that are simultaneously stories about the paradoxes of the human condition and served as a crucible in which a Self—straining towards of the nearly impossible yet existentially necessary act of connecting with Others—could be forged out of alienation and personal trauma.

Bourgeois's art embodies a courageous struggle to balance between the antinomies of 'being in the world'—alone and together—that the artist understood so well. We are mortally alone and we are inextricably connected. This connection is fraught with anxiety and pain, but it is also one of the great sources of pleasure and reasons to persist in our separate, yet intertwined, existences.

Jerry Gorovoy, Bourgeois's longtime assistant, has selected a body of work that reveals the central themes and rhythms of her autobiographical art. Gorovoy offers China an unprecedented chance to be touched by the reparative, human power of Bourgeois's art.

Louise Bourgeois (1911–2010)
Born in Paris in 1911, Bourgeois immigrated to the US in 1938, where she channeled her private traumas into intensely personal artwork. Significant exhibitions include her breakthrough 1982 retrospective at the Museum of Modern Art, New York; 1993 Venice Biennale (where in 1999 she was also awarded the Golden Lion award); her retrospective at Tate Modern, London (2007–2008), which traveled to the Centre Georges Pompidou, Paris (2008); the Solomon R. Guggenheim Museum, New York (2008); and Louise Bourgeois: Conscious and Unconscious, at the Qatar Museums Authority, QMA Gallery, Doha (2012). Her coming retrospective, Louise Bourgeois: Alone and Together, at the Faurschou Foundation Beijing, brings a multidisciplinary body of works to China from 27 October 2012 to 24 April 2013.

Faurschou Foundation
Faurschou Foundation is a privately funded art foundation in Copenhagen and Beijing established by Luise and Jens Faurschou. For 25 years, they have mounted exhibitions of works by internationally recognized artists both from Denmark and abroad.  Over the years, Luise and Jens Faurschou have assembled a notable international collection, and are planning future exhibitions with some of the world's foremost contemporary artists, curators, museums and galleries. Both exhibition spaces are free and open to public.