Dancing around the Bride 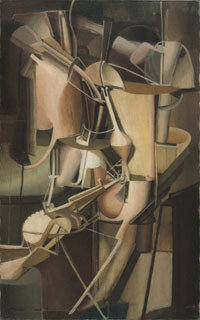 Curated by Carlos Basualdo, The Keith L. and Katherine Sachs

Examining one of the most important chapters in the history of contemporary art, Dancing around the Bride is the first exhibition to explore Marcel Duchamp’s American legacy by tracing his interactions and exchanges with four postwar masters: composer John Cage, choreographer Merce Cunningham, and visual artists Jasper Johns and Robert Rauschenberg. The exhibition will feature over one hundred works, including more than sixty by Johns and Rauschenberg and more than forty by Duchamp, as well as prerecorded and live music by John Cage and live performances of choreographies by Merce Cunningham. Many of these works will be seen together for the first time and reflect the artists’ multiple levels of engagement across the disciplines of art, dance, and music.

“As the Philadelphia Museum of Art holds the world’s largest and most significant collection of works by Marcel Duchamp, it is only fitting for the Museum to present this first exhibition juxtaposing works by Cage, Cunningham, Johns, and Rauschenberg with one another and exploring their complex and vitally important relationship to Duchamp,” says Timothy Rub, the Museum’s George D. Widener Director and Chief Executive Officer. “This multidimensional and interdisciplinary show will enable visitors to experience and more fully appreciate one of the most exciting and momentous periods in the history of modern art.”

Setting the direction for many subsequent developments in contemporary art, Duchamp famously questioned the very definition of art, probing the distinction between art and life, turning to chance rather than fixed ideas about taste and aesthetics, and utilizing everyday objects not only in the creation of his work, but as objects of art themselves. Encountering Duchamp and his work at various moments during the early stages of their development, Cage, Cunningham, Johns, and Rauschenberg each embraced key aspects of Duchamp’s ideas and artistic practices and, by doing so, reinvigorated Duchamp’s own reception in the United States from the 1960s onward. The exhibitionwill highlight formative moments such as Johns and Rauschenberg’s 1958 visit to the Philadelphia Museum of Art to see Duchamp’s The Bride Stripped Bare by Her Bachelors, Even (The Large Glass) (1915–23), one of the Museum’s greatest masterpieces and the source for this exhibition’s title.

“This exhibition is about the relationship between art and life,” notes Carlos Basualdo, exhibition curator and the Museum’s Keith L. and Katherine Sachs Curator of Contemporary Art. “It tells the story of five extraordinary artists and what happened to art and culture when their lives and work intersected. Their mutual interactions redefined the language of contemporary art in the 1950s and 60s.”

“The exhibition will also reveal how important this moment was, and still is, for contemporary art and artists,” adds Erica F. Battle, Project Curatorial Assistant, who is organizing the exhibition in collaboration with Basualdo. “The explosion not only of creativity but of creative freedom and exchange that is examined in Dancing around the Bride is highly relevant to the dynamic structures of collaboration being explored by artists today.”

In this spirit, the curators are collaborating with French artist Philippe Parreno, who is responsible for the exhibition’s mise en scène, or its visual and spatial organization. Parreno—whose own film and installation work examines conditions of looking, temporality, and sequence—will work with the curators and exhibition design team to establish a timed sequence of audio elements, including Cage’s music and other sounds, and lighting as well as contribute artistic interventions that speak to the fruitful intersection of art, life, and experience.

Dancing around the Bride will be organized into four thematic sections. The first section titled “The Bride” will look at the central figure in Duchamp’s painting Bride (1912), which later became the protagonist in his Large Glass and in turn influenced such works as Johns’s suite of eight untitled ink on plastic drawings (1986) and Rauschenberg’s Bride’s Folly (1959).

The second section explores the theme of chance in works that share this Duchampian attitude, and charts the development of chance procedures in the music of Cage, the choreography of Cunningham, and the paintings and prints of Rauschenberg. Duchamp’s 3 Standard Stoppages (1913–14) will be seen in dialogue with Cage’s Strings 1–20 (1980), Cunningham’s choreographic notes for Suite for Five (1956), and Rauschenberg’s Dirt Painting (for John Cage) (c. 1953).

In a section titled “The Main Stage” visitors can explore the collaborations and stage sets created by Rauschenberg and Johns for the Merce Cunningham Dance Company, with one of the exhibition’s centerpieces, Johns and Cunningham’s homage to Duchamp, Walkaround Time (1968). Johns’s set design for this Cunningham choreography refers to elements of The Large Glass. This section of the exhibition will also illustrate the intersecting work of Cunningham and Rauschenberg, whose Tantric Geography set design for Cunningham’s Travelogue (1977) evokes Duchamp’s Bicycle Wheel (1964 replica of 1913 original).

As the game of chess was significant to Duchamp, the final section takes chess as both a literal motif and as a metaphor for exchanges among these artists. Duchamp’s Pocket Chess Set (1943) will be seen with an electronic chessboard replicating the one that was used in Cage’s Reunion (1968), a chess game and musical performance with Duchamp. Additionally, artistic exchanges will be detailed through works grouped by conceptual affinities, such as the juxtaposition of Duchamp’s Fountain (1950 replica of 1917 original) with Johns’s Painted Bronze (Ale Cans) (1960)andDuchamp’s With Hidden Noise (1916) with Rauschenberg’s Music Box (Elemental Sculpture) (c. 1953).

The Museum’s renowned Duchamp gallery (d’Harnoncourt Gallery 182) and two neighboring galleries (180 and 181) will be reinstalled on the occasion of Dancing around the Bride, bringing a constellation of works by Cage, Johns, and Rauschenberg together to surround Duchamp’s Large Glass. This includes Cage’s No Title (date unknown), Johns’s Numbers (2007), and Rauschenberg’s Untitled (Venetian) (1973) and Untitled (Hoarfrost) (1975).

As part of a full range of public programs, the Museum is planning a series of live dance performances in collaboration with the Merce Cunningham Trust and former Cunningham dancer Daniel Squire. Periodic performances will animate the exhibition space, which will have a large dance floor at the center of its “Main Stage” section. Visitors will therefore have an unprecedented opportunity to experience Cunningham’s choreographies in direct relationship to the art of Johns, Rauschenberg, and Duchamp, and accompanied by Cage’s music.

In conjunction with the Philadelphia-based performing arts organization Bowerbird, the Museum is presenting a festival celebrating the centennial of John Cage’s birth. The festival, titled Cage: Beyond Silence, will focus on Cage’s early music, his Song Books of the mid-1970s, and his Number Pieces composed late in his lifetime, and will take place at the Museum and other locations in Philadelphia. See www.philamuseum.org/bride for information on both the dance and music performances and cagebeyondsilence.com for full Cage festival information.

Dancing around the Bride, organized by the Philadelphia Museum of Art, will debut in Philadelphia and then travel to the Barbican Centre in London where it will be on view February 14 – June 9, 2013.

“We are delighted to be working alongside the Philadelphia Museum of Art to present this important exhibition that includes such a rich selection of influential works,” said Jane Allison, Senior Curator of the Barbican Art Gallery.

CATALOGUE
A book produced to accompany the exhibition will include an introduction by Basualdo and Battle; a new essay by Calvin Tomkins, staff writer for The New Yorker who is well known for his profiles of these artists; an anthology of selected articles, critical essays, and interviews that map the artists’ relationships, selected by Reinaldo Laddaga, musician and Associate Professor of Romance Languages at the University of Pennsylvania; and the first extensive chronology detailing the lives and interactions of all five artists by Paul B. Franklin, Editor in Chief of the annual journal Étant donné Marcel Duchamp. The 432-page book, designed in a slipcase edition by Takaaki Matsumoto, will be co-published by the Museum and Yale University Press (ISBN: 978-0-87633-242-9 (PMA); 978-0-300-18925-4 (Yale), Trim: 9"x7",107 duotones and 108 color illustrations; Price: $55.00).

SPONSORSHIP
The exhibition is made possible by The Pew Center for Arts & Heritage through the Philadelphia Exhibitions Initiative. Additional support is generously provided by the John S. and James L. Knight Foundation, The Women’s Committee of the Philadelphia Museum of Art, Glenstone, The Presser Foundation, the Dedalus Foundation, The Robert Saligman Charitable Foundation, Dr. Sankey V. Williams and Constance H. Williams, Dina and Jerry Wind, John Wind, Barbara B. and Theodore R. Aronson, Christie’s, Mary S. and Anthony B. Creamer, Jaimie and David Field, Lawrence Luhring and Roland Augustine, Seda International Packaging Group, Mari and Peter Shaw, Mr. and Mrs. Aaron Levine, Alice Saligman and Klaus Brinkmann, and other generous individuals. The exhibition is supported by an indemnity from the Federal Council on the Arts and the Humanities.

Support for the accompanying publication is generously provided by Larry Gagosian.

Special thanks to The Pew Center for Arts & Heritage through the Philadelphia Music Project, The Aaron Copland Fund for Music, Dina and Jerry Wind, and John J. Medveckis for their support of the festival Cage: Beyond Silence.