In the exhibition, the exploration of the relationship between public and private culminates in the "post-privacy" section, presenting the latest positions on the subject in which artists feel their way around this still young field in search of its inherent images. By considering artworks from the late 1950s to the present day, the exhibition "Privacy" seeks to critically explore the various meanings of privacy and the mechanism behind this specific form of image production. 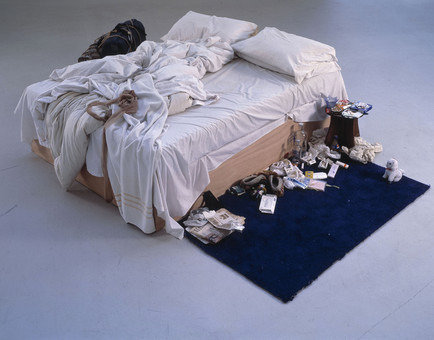 From November 1, 2012 to February 3, 2013 the Schirn will be presenting numerous contempo- rary artworks with a view to exploring the topic of the disappearing private sphere and the “public nature of the intimate”. Privacy – today this almost seems like a concept from the past. It hardly appears apt in times when everything is posted on Facebook, from your favorite recipe to your current relationship status. Exhibitionism, self-revelation, the urge to tell stories, the pleasure of presenting and voyeurism are the social strategies of our day and age – a structural change of the public sphere has long since taken place. Showcasing around 30 artistic positions, the exten- sive group show “Privacy” impressively explores the fragile boundaries between the public and the private sphere. Photographs, Polaroids, cell-phone photos, objects, installations and films show domestic scenes and reveal personal secrets. Familiar and intimate things are visually communicated. In 1959 Stan Brakhage presented to his audience a film documenting the birth of his first child. Ryan McGinley captures seemingly authentic moments in his photographic compo- sitions of friends and acquaintances, Michael Wolf underscores the easy availability of computer images by photographing scenes from Google Street View from his screen and Tracy Emin in- stalls her used bed in the middle of the exhibition space. Further artistic explorations of the radical disappearance of the private sphere and the path to a post-private society are provided by Ai Weiwei, Merry Alpern, Michel Auder, Mike Bouchet, Leo Gabin, Nan Goldin, Dash Snow, Mark Wallinger, Andy Warhol and many other contemporary artists.

The exhibition “Privacy” is sponsored by the Kulturstiftung des Bundes (German Federal Cultural Foundation). Nowadays the concept of privacy is inextricably linked to media presence. The desire for ever faster communication is extremely significant, and above all the media of photography and film enable an unbridled openness of expression. The public staging of private events, up-close-and- personal stories, talk shows, reality shows, private websites, chat rooms, digital photo albums on the Net and the presentation of personality profiles for a worldwide virtual community are refer- ences to new forms of the public display of the private sphere. The current debate on the recently coined term “post-privacy” – denoting the radical opening up of the personal sphere – fundamen- tally questions the hitherto valid notion of privacy.

By considering artworks from the late 1950s to the present day, the exhibition “Privacy” seeks to critically explore the various meanings of privacy and the mechanism behind this specific form of image production. In addressing this topic artists have used a wide variety of recording systems. Back in the 19th century the invention of photography had enhanced the status of private life, al- lowing it to be captured by amateurs, reproduced, and spread. Later it was joined by portable film and video technology that required little expertise. Today, the permanent availability of technolo- gy means that everything can be turned into an image at any time. Then it takes just a few steps with a smartphone to post it on the Net and send it out into the world. In recent years these tech- nological developments have led to image production shifting to a new media area – the Internet.

In the exhibition, the exploration of the relationship between public and private culminates in the “post-privacy” section, presenting the latest positions on the subject in which artists feel their way around this still young field in search of its inherent images. For instance, British artist Mark Wallinger, in his installation Unconscious (2010), takes numerous cell-phone photos he found on the Internet showing people falling asleep on busses and trains and weaves them into a dense tableau. Belgian artist collective Leo Gabin takes its material from YouTube, where amateur filmmakers happily present excerpts from their own lives in harmless, bizarre but also dramatic moments. Evan Baden addresses the omnipresent culture, fueled by social networks and digital media, of revealing everything about oneself and has produced images that show how young girls present themselves on the Net.

The constant availability of digital images is also the key theme in works by Peter Piller, Michael Wolf and Edgar Leciejewski. For his series Frau Baum (2010-12) Peter Piller uses images from online dating portals and reveals the pattern in supposedly individual information. In New York City – Ghosts and Flowers (2010) the young Leipzig-based artist Edgar Leciejewski took a close virtual look at the city using Google Street View. In his images residents photographed by chance come across as shadows. Mike Bouchet pointedly highlights the commercial aspect of privacy by fusing 10,000 pornographic films from the Internet into an electronic tableau, where sexual activi- ty is seen from a distance as a vivid hustle and bustle. Yet the right to express oneself (as an artist) and to visualize private things takes on an entirely new meaning in the context of a totalitar- ian system compared to the Western world. Via his blog, which was closed at times, and then via Twitter Ai Weiwei repeatedly presented himself, his surroundings, but above all his political con- victions and the deplorable state of affairs in China, and in doing so created a 21st-century social installation that culminates in the work 258 Fake (2011).

The exhibition “Privacy” looks at the different paths that lead from the nucleus of privacy in the 19th century to the transparent post-privacy of today’s world. At one time images depicting private life were a matter for amateurs. Artists still explore this social use of photography today and inte- grate the private production of images into their works. For instance, in her series Vox Populi (2004-2012) Fiona Tan combines snapshots from different countries to form huge tableaus. Jörg Sasse also casts an analytical eye on collective archives. Alongside individual composition he sabotages the documentary character of the photographs by editing them on computer. From the 1960s onwards images depicting private life increasingly left this closed context; artists deliberately countered the intellectual confinement of the small-minded middle-class bliss of the 1950s with films and photographs of their own alternative ways of life. A new generation ques- tioned old behavioral codes and rejected existing rules, including artistic and aesthetic ones. Body politics, gender issues, new forms of living together became a central topic in art. In 1959 Stan Brakhage, the great pioneer of experimental film from the United States, made the film Window, Water, Baby, Moving, in which he (arguably for the first time in the history of film) docu- mented the birth of his child. For his video Sleep (1963) Andy Warhol filmed his then lover, Beat poet John Giorno, for five hours as he slept. The viewer is directly involved in Andy Warhol’s life, transported to his lover’s bedroom. The French avant-garde filmmaker Michel Auder presents himself as an obsessive chronicler in Keeping Busy (1969) – his “it’s life movie” – at the center of bohemian life in the 1960s.

Above all, this rebellious generation broke with the traditional family, domestically-oriented con- sumer behavior, the idea of sexuality restricted to marriage and conventional gender roles. Mark Morrisroe shows intimate situations from his hedonistic homosexual life in the Punk scenes of Boston and New York. Nan Goldin challenges the traditional model of the bourgeois family by presenting her own truth. Goldin documents both her own life and that of her friends and presents these biographical details in comprehensive photographic series. Notation, documentation, au- thenticity and the apparent amateur recording of privacy can also be detected in Ryan McGinley’s work or the Polaroids by Dash Snow, who died at a young age. In 1999 Tracey Emin exhibited her entire bed including dirty sheets, worn pantyhose and condoms, and Sophie Calle questions the bourgeois family in True Stories (2004) by narrating fictitious weddings, withheld love letters or a lovers’ tiff.

The dysfunctional family is also a topic of intense focus for the artists. Intimate inside views tell of families whose lives are far from being idyllic. Often they serve as evidence of an attempt to over- come and distance oneself from the situation. In his series Ray’s a Laugh (1989-1996) Richard Billingham depicts the misery of his parental home, a social housing apartment in Birmingham, UK, in the form of photographs of his father Ray and mother Liz, whose everyday life is a bleak cycle of monotony and alcohol. Likewise, in her portfolio Coral Ridge Towers (1969) Marilyn Minter portrays her own mother, who practically never left the house and whose life took place in bed. The photographs Leigh Ledare took of his mother Tina Peterson and combines into a com- plex psychological tableau fluctuate between eliciting shock and empathy. Images from Tina’s better days as a model and dancer, handwritten lists and notes by her son, which elaborate on his relationship with his mother beyond the images, are combined with the open breaking of a taboo, namely explicitly photographing his mother having sex with younger lovers. This mosaic produces a complex portrait that would suggest that a photographic image is not always able to convey all the relevant levels of meaning.

In the context of the exhibition Leo Gabin and Edgar Leciejewski will also present art projects specially conceived for the Schirn online magazine. Every week the three artists from the Belgian artists’ collective Leo Gabin will present video clips on the Schirn magazine website, which form the basis of a new work. This will enable the general public to participate in the creation of a new artwork, from the YouTube clip to the finished video. Edgar Leciejewski will write a blog present- ing readers with a photo from his day, complete with the location and time taken. With these pro- jects “Privacy” extends beyond the classic exhibition situation to take on a further dimension on the Internet.