The background for the exhibition is the long-standing economic relation between The Netherlands and the African continent. The title refers to the colourful printed fabrics that are exported from The Netherlands to Africa, and therefore popularly known as Hollandaise or Dutch Wax. On show Godfried Donkor, Abdoulaye Konate', Wendelien van Oldenborgh, Willem de Rooij, Billie Zangewa. 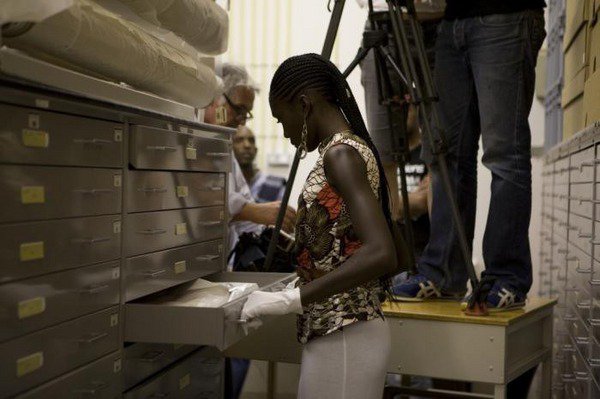 The background for the exhibition HOLLANDAISE is the long-standing economic relation between The Netherlands and the African continent. The title refers to the colourful printed fabrics that are exported from The Netherlands to Africa, and therefore popularly known as Hollandaise or Dutch Wax. It was Dutch textile enterprises such as Vlisco which developed commercial applications for Javanese batik in the 19th century, and found their largest market in West Africa. Today the brightly coloured fabric is regarded as typically African. But in fact it is the result of complex globalization processes that right down to this day exhibit colonial features.

HOLLANDAISE is a critical, contemporary art exhibition built around this typical textile. The idea for the exhibition is from curator Koyo Kouoh, who is director of her own art institution in Dakar, Senegal. She asked five artists to delve into the phenomenon of Hollandaise and the peculiar trading relations and cultural interchanges that it represents. They all produced new work especially for this exhibition, which after Amsterdam will travel on to Dakar.

Growing up in Africa, Kouoh became fascinated by Hollandaise. The exuberantly decorated textiles are used chiefly for clothing for special occasions, such as weddings and funerals. Some patterns are therefore emotionally identified with specific events in one's own life history. But despite the success of Hollandaise on the African market and its strong identification as African, Africans themselves are hardly involved in the creative process for ‘their’ fabric at all. Furthermore, today the Dutch market leader is encountering heavy competition from the Far East. Yesterday's imitator is being imitated in turn.

The exhibition HOLLANDAISE is a creative and also critical examination of such historical, global developments and their local implications.

Godfried Donkor, based in London, made a two-channel video film about his mother and her friends in Ghana, who since the 1950s have built up collections of deeply cherished textiles. These collections, regarded as an investment, also reveal their life histories. Abdoulaye Konaté, who lives and works in Mali, incorporated Dutch Wax into a monumental textile-based representation of festive ceremonies in his country. Both the material used and the celebration scene raise issues regarding the ethnologically coloured concept of ‘authenticity’. Wendelien van Oldenborgh's La Javanaise was filmed in the Royal Institute for the Tropics in Amsterdam. The work addresses the inextricable link between colonialism and globalization, authenticity and imagination, performing and posing, especially in relation to the Wax Hollandais and its origins.Willem de Rooij developed a specific, industrially manufactured wax print that subtly refers to the currents of migration and trade among Africa, Europe and Indonesia. Billie Zangewa, living in Johannesburg, incorporates photography into textile works. For HOLLANDAISE she focused on classic Vlisco patterns that in Africa are popularly known by exotic (women’s) names such as Aura and Angelina.

Koyo Kouoh is the director of RAW Material Company in Dakar. She has been co-curator for exhibitions including ‘Hypocrisy: The Site Specificity of Morality’ in the National Museum for Art, Architecture, and Design, Oslo (2009) and ‘GEO-graphics, a map of African art practices past & present’ in BOZAR in Brussels (2010). She was also artistic advisor for Documenta 12 and 13.

A special issue of the SMBA Newsletter will appear to accompany HOLLANDAISE, with an introduction by Koyo Kouoh and contributions by PhD researcher/artist Senam Okudzeto and political scientist Françoise Vergès. This newsletter is bilingual (Dutch/English) and available for free at the exhibition, and on-line on the SMBA website.