"PRESENTation. Gifts for the ZKM Collection" shows a small selection of works of art, which were donated to the ZKM by private patrons or businesses. "Better Books: Art, Anarchy and Apostasy" presents the artworks, films, and poems that bore witness to this movement, as well as rarely shown photographs, ephemera, and additional archive material. "One Sixth of the Earth. Ecologies of Image" focuses on works of moving imageand develops a broad "ecological" framework to present and contextualize a wide range of work from different countries and cultures. 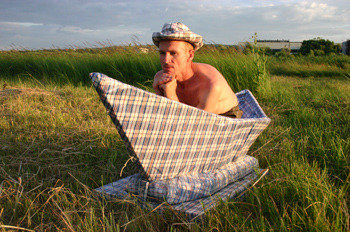 One Sixth of the Earth
Ecologies of Image

"One Sixth of the Earth. Ecologies of Image" presents art produced in countries of the former Soviet Union and Eastern Bloc dating from the last 15 years. The exhibition focuses on works of moving image − the medium adopted by many contemporary artists − and develops a broad 'ecological' framework to present and contextualize a wide range of work from different countries and cultures.

The understanding of ecology informing "One Sixth of the Earth" is based on the ideas of French psychoanalyst, Félix Guattari, as elaborated in his essay "The Three Ecologies" (1989). Here, Guattari argues that the challenges posed by current ecological dilemmas can be met only by addressing the totality of human societal and environmental ecologies. The author goes on to argue that art represents one of the modes through which these three levels may be integrated: artists operate at the forefront of a new synthesis through which the experience of art brings greater balance into our lives thus reducing social and ecological disruption.

Though bold this is a strikingly appropriate description of countries of the former Eastern Bloc and Soviet Union in the years following 1989. The utopian aspirations informing these erstwhile socialist states were relegated to history following the dystopian experience of survival among the economically and ecologically damaged societies that then emerged. The present exhibition aims to present some of the exciting voices of the period by bringing together both well-known and widely exhibited artists with others who have had much less public exposure.

The exhibition engages a number of disparate, at times opposed themes, which not only follow the trajectories of participating artists, but also the substantially different histories of their respective countries of origin and/or the location in which they are currently active artistically. These include: cultural nomadism − artists are now at liberty to search abroad for the most suitable schooling and practice; the emergence of vital local art scenes (often building on networks established during the Communist era), which may present artists with difficult choices for advancing their careers at home or abroad; the rise of new nationalisms (with attendant xenophobia and racism affecting many countries in the region); issues of gender and sexual identity (in some cases linked to progressive cultural politics of a previous, communist generation).

"One Sixth of the Earth" (1926) is also the title of a film by Dziga Vertov, the most experimental exponent of documentary cinema in the former Soviet Union. The film depicts a utopian vision of multiracial and multicultural potential in Soviet society. The exhibition makes emblematic reference to this film as an indication of the particular genius and aspirations of artists and curators from this region of the world. The moving image was the most influential art form during the communist era, proving itself as a forceful means of artistic critique.

In the 1950s and 1960s, London underwent a cultural revolution, which changed forever the way contemporary art would be seen and set off a radical reformulating of artistic creation. United in their disbelief in the well-established cultural norms, the post-war generation of artists, poets and writers found new ways to distance themselves from the previous generation. Many of these artists first met one another and took refuge at Tony Godwin’s Charing Cross bookstore "Better Books". With the successful concept under the management of Bill Butler, Barry Miles and Bob Cobbing, "Better Books" became not only a haven but also the platform and "voice" of the explosively radical spirit within London. The bookshop enabled and initiated meetings, gave room for ideas, and became a sanctuary for numerous avant-garde artists, poets, filmmakers, musicians and writers.

The exhibition "Better Books: Art, Anarchy and Apostasy" at ZKM | Museum of Contemporary Art presents the artworks, films, and poems that bore witness to this movement, as well as rarely shown photographs, ephemera, and additional archive material. This presentation gives a deep insight into the scene around "Better Books" from which a multitude of activities and events emerged, such as "The International Poetry Incarnation", Gustav Metzger's "Destruction in Art Symposium (DIAS)", The People Show, the foundation of the London Filmmakers' Cooperative or John Latham's and Jeffrew Shaw's "Book Plumbing"-events.

For the first time it will be possible to see and to experience a live presentation of Gustav Metzger's re-fabrication of his own work "Earth from Space (revisited)." The project (1966−2012) belongs to Metzger’s earliest experiments with liquid crystals, which became the basis for his psychedelic light object. The seldom shown work "Sound Hat" (1970) by Annea Lockwood, of which 15 copies were produced for Henri Chopin’s "OU," is likewise a part of the show along with a documentation of Criton Tomazos's unfinished "Cage" project.

Additionally, early works by Jeff Nuttall can be seen, as well as the bizarre constructions of Bruce Lacey and also John Latham's scultupture "The Laws of England". Films by Stephen Dwoskin, Pip Benveniste, John Latham, Jeff Keen, Peter Whitehead, Piero Heliczer and many others form the mise-en-scène of the exhibition at ZKM. Also present will be documents and publications by, among others, Bob Cobbing, Jeff Nuttall, Alexander Trocchi and Dom Sylvester Houdard.

PRESENTation
Gifts for the ZKM Collection

Since the founding of the ZKM | Center for Art and Media Karlsruhe in 1989, a comprehensive collection has been built up with a high degree of competence and expertise – initially by the founding director Heinrich Klotz (1935-1999), and subsequently pursued by Peter Weibel, Chairman of the ZKM. In addition to the most extensive collection of interactive art worldwide, and in keeping with its programmatic focus on major artists, the ZKM has in its possession numerous works in the genres of video and photography, characterized during the founding years as “new media”. However, traditional forms of artistic expression such as painting, sculpture and drawing by renowned creators of art can also be found in the ZKM collection, which has grown to include approximately 1,500 positions since its founding.

In addition to a far-sighted acquisition policy for the ZKM Collection, since 1989 the institution has frequently been given generous presents by renowned artists. They have also contributed to enhancing the ZKM’s standing internationally, and to making the institution more attractive as a partner and potential lender. In view of the increasing budgetary shortages for public museums, the practice of donations always guarantees a much appreciated growth for the collection – in the past, but also for the future.

Just at a time in which the role of the philanthropically “giving hand” (Peter Sloterdijk) and the “common wealth” (Michael Hardt, Antonio Negri) have been in recent discussion, an exhibition by ‘democratic donors’ assumes special value. With this show, the ZKM wishes to honor the donors for their generosity.

PRESENTation. Gifts for the ZKM Collection shows a small selection of works of art, which were donated to the ZKM | Museum of Contemporary Art by private patrons or businesses – presents of a special kind. The added suffix “-ation” connotes an action or the results of an action of a main verb. While this points decidedly to the presentation of the works of art on show, in a figurative sense it may also be understood as a challenge.