"For Two Weeks One Summer" show embedded into the context of the second edition of the Future Generation Art Prize, Hirst presents a series of 11 dynamic new paintings he has been working on since summer of 2010. The 21 shortlisted artists for the second edition of the Prize present newly produced works, the winner will be announced on December 7, 2012 by an international jury. "Collection Platform 3: Forever Now show" is a comprehensive selection of 9 leading artists of our time. 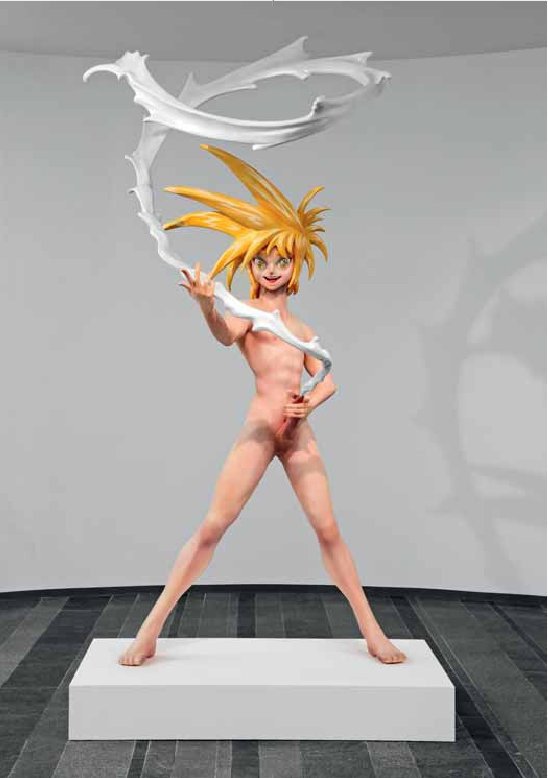 The PinchukArtCentre is exhibiting 21 shortlisted artists for the second edition of the Future Generation Art Prize, the first global art prize for artists up to 35 founded by the Victor Pinchuk Foundation in December 2009. The exhibition focuses on the presentation of newly produced works giving a chance for nominated artists to show off their most advanced position. It offers a remarkable view on the new tendencies and artistic practices of the next generation of artists.

The exhibition will be open from November 3, 2012 till January 6, 2013 in the PinchukArtCentre (Kiev, Ukraine). The Main Prize Winner receiving $100 000, will be announced at the Award Ceremony on December 7, 2012 by an international distinguished jury in Kiev, Ukraine.

At the same time the PinchukArtCentre will present a solo exhibition by Damien Hirst, one of the Mentor Artists of the Future Generation Art Prize. For this show embedded into the context of the second edition of the Future Generation Art Prize, Damien Hirst will present a series of dynamic new paintings he has been working on since summer of 2010.

The twenty shortlisted artists represent 16 different countries. They have been selected from more than 4 000 applications received from 134 countries spread across all continents. The artists were nominated by 7 members of the Selection Committee, competent and global art-professionals who were suggested by the members of the Jury.

The 21st nominee for the Future Generation Art Prize is Mykyta Kadan, the winner of the PinchukArtCentre Prize 2011, the first national contemporary art prize awarded to young Ukrainian artists under 35.

Eckhard Schneider, General Director of the PinchukArtCentre: “The high artistic quality and the global range of the second edition of this first global art prize demonstrates the successful implementation of the Future Generation Art Prize as a respected long term commitment for the future generation of artists worldwide.”

Jurors will select and award the winner of the Main Prize who will receive a generous prize ($60,000 in cash and $40,000 toward production of new work) at the Award Ceremony on December 7, 2012 in Kiev (Ukraine).

An additional $20,000 from the Victor Pinchuk Foundation will be allotted to fund artist-in-residency programs for up to five other special prize winners.

Images of works by all shortlisted artists will be posted on the website, and members of the public will be invited to vote online for the People’s Choice Prize. This prize will be awarded at the end of the exhibition. It is not a cash award and serves as a symbol of audience recognition.

The PinchukArtCentre (Kyiv, Ukraine) presents the solo exhibition of Damien Hirst, the Mentor Artist of the Future Generation Art Prize. For Two Weeks One Summer show embedded into the context of the second edition of the Future Generation Art Prize, Hirst presents a series of eleven dynamic new paintings he has been working on since summer of 2010. The exhibition will be open from November 3, 2012 till January 6, 2013 in the PinchukArtCentre.

Damien Hirst’s new works have been painted from life in his Devon studio. They are varying in size, from more intimate canvases to large-size paintings. They can be seen as traditional still-life, with a strong element of memento mori, depicting an array of carefully arranged elements, both natural and inanimate, alongside objects and formal devices that have made their appearance in Hirst’s sculptures and installations before. Birds, butterflies and flower blossoms with their bright colours suggest a sense of pure joy which often is countered by more sinister symbols, such as a shark’s gaping jawbone.

Some objects are painted with clarity and impasto; others appear hazy and faint, as if they were somehow more insubstantial, part of a sudden apparition or dream-like vision. Often Hirst has decided to keep the lines of the original drawings visible, sometimes combining them with a grid of white spots. In this way he suggests an underlying formal order to the arrangements of objects, fauna and flora.

Eckhard Schneider, the General Director of the PinchukArtCentre: “I am especially grateful to Damien Hirst and his unwavering commitment as a mentor artist in supporting the young generation by showing a new sequence of beautiful paintings from his series Two Weeks One Summer.”

In 2009 PinchukArtCentre presented Requiem by Damien Hirst, a major retrospective of over 100 works dating from 1990 to 2008. The show brought together many of the artist’s most celebrated works: early iconic sculptures such as A Thousand Years, 1990 and Away from the Flock, 1994; the monumental butterfly triptych Doorways to the Kingdom of Heaven, 2007; Death Explained, 2007, a sculpture of a shark cut in half in formaldehyde. Requiem also showed for the first time a series of skull paintings, among them: Floating Skull, 2006, The Meek Shall Inherit the Earth, 2008 and Men Shall Know Nothing, 2008. More than 300 000 persons have visited the exhibition at the PinchukArtCentre.

Damien Hirst was born in 1965 in Bristol, UK. He lives and works in London and Devon. He recently had a comprehensive survey of his work to date at the Tate Modern in London. Other solo exhibitions include Cornucopia, The Oceanographic Museum of Monaco (2010), No Love Lost, The Wallace Collection, London (2009), Requiem, PinchukArtCentre, Kyiv (2009), For the Love of God, Rijksmuseum, Amsterdam (2008), Astrup Fearnley Museet fur Moderne Kunst, Oslo (2005), Museum of Fine Arts, Boston (2005) and The Agony and the Ecstasy, Archaeological Museum, Naples (2004). An exhibition of the artist’s private collection, Murderme, was held at Serpentine Gallery, London, in 2006. Hirst received the DAAD fellowship in Berlin in 1994 and the Turner Prize in 1995.