The XIX edition features 150 participating galleries from 15 countries in four different continents. Following up the theme last year, it features the idea of 'Made by Art' as the annual theme. It also showcases the indigenous art in Taiwan. During the exhibition, the fair collaborates with other art institutions in Taipei City, organizing free tour bus to take Art Taipei visitors to events in Taipei. 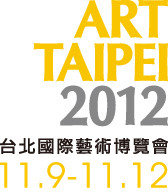 As the longest-lasting art fair in Asia-pacific, ART TAIPEI annually makes record high in terms of transaction volume and visitors number, securing its status as one of the major art fairs in Asia. ART TAIPEI used to be held in August, while most of the European galleries are having their summer vacation. This year, ART TAIPEI 2012 has been rescheduled to November, from 9th Nov. to 12th Nov. and consequently attracts more galleries to participate in the event. Located in the Taipei World Trade Center Building 1, the 19th Art Taipei up-graded the whole fair scale to total 150 participating galleries, the 20 percent growth of the previous year, from 15 countries in four different continents. Among the galleries from overseas, it is the first time to have those from the UK, Austria, Greece, Russia, and Lebanon to make their presence at ART TAIPEI, well proving how the international art society values the market of art collection in Taiwan.

With its 19-year-history, ART TAIPEI not only makes an international art event but also devotes itself to bridging the art society in Taiwan and the art scene overseas. Meanwhile, ART TAIPEI expects to have different achievements with the passing of time. We invite numerous collectors from overseas to visit the art event, attempting to promote works of Taiwanese artists to the international stage. We also encourage major organizations, enterprises, and institutions to purchase artworks made by Taiwanese artists to the overseas bases. The one piece a year project might help establish systematic collections through the professional suggestions. In addition to further increasing the international visibility of Taiwanese artists, ART TAIPEI also intends to build up a communicational platform to preserve important Asian art assets in Taiwan through the art fair. The meaningful and substantial mutual communication will indeed bridge Taiwan and the world, improving the art appreciation/collection in Taiwan.

The Annual Theme: Made by Art
Because of Art, We Live with Greater Profundity

For the first time, ART TAIPEI brought up the annual theme One Love, One Art! in 2011. Following up the theme last year, Art Taipei 2012 features the idea of Made by Art as the annual theme. Through works of art, artists deliver message as well as energy as if they are handing over a key, welcoming viewers to the world of excitement, amazement, and surprise a world full of the scenery one can never imagine and the reality one has never noticed. Because of art, we live with greater profundity. In addition to the sections of Art Galleries, New Media, Fresh Art, Made in Taiwan - Young Artist Discovery, and Art Media, ART TAIPEI 2012 particularly presents Art Classic featuring the first-generation Western painting artists in Taiwan. About one hundred years ago, painters such as Chen Cheng-Po, Liao Chi-Chun, Yang San-Lang, and Li Shih-Chiao established the modern art style in Taiwan under the influence of European art or Japanese art. The oeuvre of these artists documented the development of humanity and natural studies in the early Twenty Century. Through the exhibition of Art Classic, ART TAIPEI invites viewers to memorize the wonderful achievement of classic painters in Taiwan.

Art Classic & Modern Indigenous Art in Taiwan
Apart from the exhibiting galleries, ART TAIPEI 2012 also showcases the indigenous art in Taiwan. ART TAIPEI presents the feature exhibition, in which we invite the curator Li Jiun-Shyan, the former director of Kaohsiung Museum of Fine Arts and the director of Kao Yuan Art Center, to organize Formosa, Breeze and Tide: Modern Indigenous Art in Taiwan. The modernized society gradually shattered the tribal tradition which is shared by the Taiwanese indigenous, a sub-Austronesian group living in Taiwan. The traditional art which should be strongly connected to the traditional way of living has thus lost its foundation. Before, the traditional Austronesian art used to be regarded as craft art by the mainstream. Such a misunderstanding also hindered the development of the indigenous art in Taiwan. Since the early 1990s, the concept of modernization has been shared by many talented indigenous artists in Taiwan, particularly under the influence of the growing pan-indigenous identity. After its twenty-year development, the Taiwanese indigenous artists have opened up a new page for their artistic exploration, which not only maintains its traditional essence but also provides a unique perspective as a response to the contemporary society. In the feature exhibition Formosa, Breeze and Tide: Modern Indigenous Art in Taiwan, we systematically demonstrate the two major categories of the practice of indigenous artists the mountain and the ocean, offering a comprehensive view of the contemporary art in Taiwan.

Art Makes Us Move On
One Love, One Art! Charity Photography Workshop ART TAIPEI ART BUS
What contemporary art provides is not only an activated perspective for observation, but also a creative means to change the society. In 2011, ART TAIPEI invited celebrities as well as famous figures in various fields to design badges under the annual theme One Love, One Art! The total revenue from the works was donated to the elementary schools in the marginal areas for their art education. This year, ART TAIPEI 2012 organizes a photography workshop in Pingtung, the area severely damaged by The 88 Taiwan Flood in 2009, inviting artist and singer Cheer CHEN to photograph the local life of the tribe with the participating kids. The photo documentary captures the post-disaster transformation of the families and the land. With the belief that art can make our society better, the photographic works will be exhibited at ART TAIPEI and the charity sales of the works will be donated as the education fund for those children.