In her works the artist uses mainly photos, animation, videos and collages. Polska is interested in the nature of the memory mechanism which due to its imperfection is close to the process of creation. Szlaga is a painter of numerous topics or maybe it would be better to say that his art is a kaleidoscope of pieces which turn into a panorama of the world in chaos. 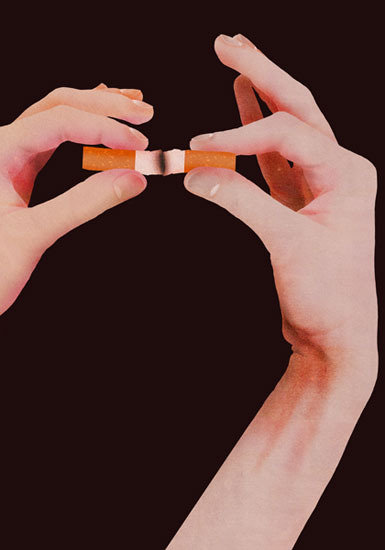 In her works the artist uses mainly photos, animation, videos and collages. She is interested in the nature of the memory mechanism which due to its imperfection is close to the process of creation. Agnieszka Polska’s animations are based on the idea of bringing archival materials, such as old photos, to life. She uses pre-war newspapers, books, black and white photos from the 1960s, 1970s, including the documentation of works of art, as her source materials. Borrowed aesthetics decides about the atmosphere of her works, as if rooted in utopian, slightly idealised visions of the future. The artist shows how misconceptions resulting from reading of what has been archived and thus deprived of its original context can lead to a certain new quality. Polska’s strategy resembles the work of an archivist with a critical attitude – she is less interested in what was actually archived, paying more attention to the things that have not been stored. Because of it her works balance on the borderline between reality and fiction, while the viewer remains in the state of uncertainty with respect to the status of the materials presented: which part of it is an artistic creation and which constitutes a historical document.

Agnieszka Polska’s exhibition entitled "Aurorite" revolves around the artist’s most recent film "Włosy / Hair" the premiere of which will take place in the Centre for Contemporary Art Ujazdowski Castle. The film further explores Agnieszka Polska’s field of interest. On the example of the phenomenon of the Polish hippie movement the artist asks a question about the character of the revolutionary idea which in the different social and political context underwent transformation and got distorted with respect to its original. What is the meaning of the evolution process for the idea and what is the catalyst of changes?

The exhibition will also include some of the artist’s earlier works, among others films, e.g. "How the Work Is Done" (2011), "Stahlwille" (2008), and photo-collages.

Agnieszka Polska (born in 1985) is one of the most interesting Polish artists of the young generation. In 2011 she won the main prize in the Eugeniusz Geppert painting competition in Wrocław. This year her films have been presented at Tate Modern in London. Polska was also one of the 20 artists nominated for the 2012 Future Generation Prize for young artists, founded by the Ukrainian collector Victor Pinchuk, founder of the centre for contemporary art in Kiev – Pinchuk Art Centre.

"To paint everything!” – this unsatisfied desire drives Radek Szlaga’s artistic pratice. He is a painter of numerous topics or maybe it would be better to say that his art is a kaleidoscope of pieces which turn into a panorama of the world in chaos. Flooded with pictures, he responds with his own paintings. He processes, distorts and mocks images relentlessly. In Szlaga’s works the baroque abundance of imaging fights for something better against primitivism and aggressive expression. Complicated iconographic programmes clash against vulgarity; visual erudition serves the grotesque. Szlaga does not lose his hope that painting can still be a language used to describe the world, but at the same time he remains just a step away from iconoclasm, going out of the painting frames, negating and finally compromising the painting gesture. Out of contradictions on which Szlaga’s artistic practice is founded there emerges one of the most interesting propositions of the contemporary Polish art: multi-layered, digressive, irritating creation, loaded with expression, irony and anxiety, dragging the viewer into ist labyrinth of motives and narrations.

The exhibition at the CCA Ujazdowski Castle constitutes so far the broadest institutional presentation of Radek Szlaga’s artistic pratice. The show is titled Freedom Club. These were the initials used by Theodore John Kaczynski, an American of Polish origin, mathematical genius, graduate and professor at Harvard University, who at a young age abandoned a promising academic career, voluntarily excluding himself from society and devoting the rest of his life to a fight against modern civilisation. His means were radical and he become infamous as the ‘Unabomber’, an elusive terrorist, sending bomb letters from a remote cabin in Montana to scientists and corporate executives. The deadly parcels were signed ‘FC’, which he later asserted stood for ‘Freedom Club’.

The super-intelligent Kaczynski skilfully covered up his tracks and left false many clues, successfully misleading the authorities for twenty years. The search for the ‘Unabomber’ became one of the lengthiest and most complex operations in the FBI’s history. Kaczynski was finally apprehended in 1996. No evidence was found during his trial that a ‘Freedom Club’ had ever existed and there are all indications to believe that it was Kaczynski’s invention. Nonetheless, Radek Szlaga undertakes his own investigation regarding the mythical organisation. The exhibition becomes a visual inquiry into what the Freedom Club is, or could be.

Painting becomes a way of collecting and processing visual tropes that can help the artist (and the viewer) pick up a trail of the Freedom Club. Szlaga searches for images, representations of the ideas that motivated ‘Ted’ Kaczynski and that could serve as inspiration for the followers of his work. Anarcho-primitivism, resistance against social hierarchies and civilisational rigours, hostility towards the technological expansion in all areas of life, aversion to power, dreams of a return to primeval freedom – those are some of the notions that the Unabomber employed and that comprise the subversive discourse of the Freedom Club.

Szlaga discovers the outlines of those notions among images of Others, of the excluded, the inferior, the second-rate citizens – the potential recruits of an anti-systemic rebellion. Investigating Kaczynski’s Polish roots, the artist returns to the Polish countryside, finding his own roots. He depicts Ochotnica, a village at the foot of the Szlagówka mountain and a cradle of the Szlaga family – a semi-mythical country where people live close to animals, and civilisation clashes with the powers of ancient superstitions. From there the trail goes to America, where many of the artist’s relatives have emigrated in search of a better life. But in Szlaga’s narrative the American promised land assumes the form of Detroit, a fallen city that has gone bankrupt, is depopulating at a rapid pace, and functions today as a symbol of a nasty awakening from the ‘American dream’.

Between Szlagówka and Detroit roam demons and hogs, cannibals and highlanders, bandits and peasants, dwarves and ancestor spirits, Africans and Poles, African Americans and immigrants – the protagonists of Szlaga’s painting show. Time and again, this spectacle leaves the picture frame. In the shadow of the art works, the artist installs in the gallery space artefacts that do not fit the order of painterly representation, bringing in car wrecks, highlighting macabre trophies and stuffed chicken heads, growing potatoes under glass in the exhibition room, and setting up a distillery at the back to produce moonshine – in praise of the idea of informal economy.

In the centre of the show Szlaga places a map of the world and portraits of his parents, creating an image of cosmos and inscribing his own genealogy in it. This cosmogonic gesture suggests that creating an exhibition is the same as building a model of a personal universe. This would be a represented world, a world built of the visual substance of images remaining in constant flux. Szlaga mixes found images with those produced by his imagination, multiplying, repeating, copying and distorting them, reflecting them in each other. Reality becomes an image and image becomes reality – like the obsessively recurring motif of a burnt-out car wreck. The wreck – an evidence of a riot, a bomb attack, an insurance fraud or an economic crash, or perhaps a victim of the revolutionary vandalism of technology-combating anarcho-primitivists – appears first as a representation but a moment later materialises in the gallery as a physical object illustrating the paintings. Does this mean that if an image of the Freedom Club is found the organisation will become real? The same question can be asked of the exhibition as a whole. Among the many paintings Szlaga places a manuscript, an illuminated book that is a chronicle of his Freedom Club-related investigations and a source, a matrix, for all the other images – and at the same time a mirror in which the exhibition is reflected. Near the book stands a watchtower. On its top is an eye that scans the exhibition. Is the great eye an allegory of the painter’s all-seeing gaze, a gaze that crystallises into an image? Or is it that the painter himself is kept under surveillance by an eye he has created? In the world of the Freedom Club, both answers are equally good.
Stach Szabłowski

Radek Szlaga (born in 1979) graduated from the University of Arts in Poznań. Co-founder of the artistic group PENERSTWO in Poznań. Painter, draftsman, author of artistic books and installations. Lives and works in Warsaw.