Painting after Performance. A new look at the dynamic relationship between performance and painting from 1950 to the present day, considering the ways in which experiments in post-war performance have influenced and expanded contemporary painting. 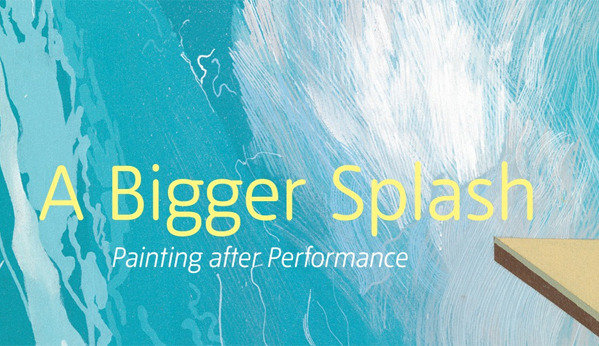 A Bigger Splash: Painting after Performance will take a new look at the dynamic relationship between performance and painting from 1950 to the present day, considering the ways in which experiments in post-war performance have influenced and expanded contemporary painting.

Taking its title from David Hockney's iconic 1967 Californian pool painting that depicts a fabricated image of a 'splash,' the show opens with an asymmetric pairing of this pivotal work from Tate's collection, with another one: Jackson Pollock's action painting Summertime: Number 9A, 1948. Each work is shown with associated documentary footage. For Pollock, the canvas was "an arena in which to act," a real-time record of the artist's movements in actual space and time. In Hockney's case, the painting can be read as an artificial backdrop that opens up a theatrical space, implying an alternative kind of performance as the viewer enters into its fictional world.

To reconsider the entanglement of painting and performance and its impact on artists now, this exhibition brings together a range of key works by over 40 artists including the Gutai group, Pinot Gallizio, the Vienna Aktionists, Cindy Sherman, Eleanor Antin, IRWIN, Ei Arakawa and Lucy McKenzie. Moving through half a century of artwork in the form of painting, video and photography, alongside archival and documentary material, it is organised into two parts.

The first half is a thematic, partial survey of the antagonistic relationship between performance and painting from the 1950s to the early '80s. Moving beyond the territory of action painting, A Bigger Splash nevertheless first looks at the ways in which artists such as Niki de Saint Phalle or Yves Klein explored the act of applying paint to canvas as a form of performance. The show goes on to consider the reinvention of painting as a collaborative or ritualistic action in the work of Stuart Brisley, Hélio Oiticica or Wiktor Gutt. Subsequently—through artists working largely from feminist or queer perspectives in the '70s—it considers how painting was re-thought in new media via body-painting or drag, and how artists including Ewa Partum, Helena Almeida or Luigi Ontani experimented with performance to reimagine painting as a transitory form, often using make-up or decoration as vernacular equivalents of fine art practices.

In the second part of the exhibition, each room is devoted to a single contemporary artist or group. By looking at the worlds of these artists, the show considers the impact of those experiments in performance, theatricality and masquerade on expanded forms of painting being made from the late '70s to the present day. The exhibition will showcase a number of large-scale installations, such as Karen Kilimnik's dream-like Swan Lake, 1992, and Marc Camille Chaimowicz's stage-set-like room Jean Cocteau…, 2003–12. It will reveal how attitudes developed through the free play of performance paved the way for contemporary artists such as IRWIN, Jutta Koether, Ei Arakawa and Lucy McKenzie to rethink the place of painting. By examining this relationship between paintedness, the body and the gallery space, A Bigger Splash will uncover the underlying influence of action and performance and an increasingly important attitude of performativity upon artists working with painting today.