A growing, temporary and living performance archive traveling through Europe from 2011 to 2013. It presents feminist, gendercritical and queer performance art by a vast number of artists and artist collectives from the 1960s to the beginning of the 1980s, as well as contemporary positions. 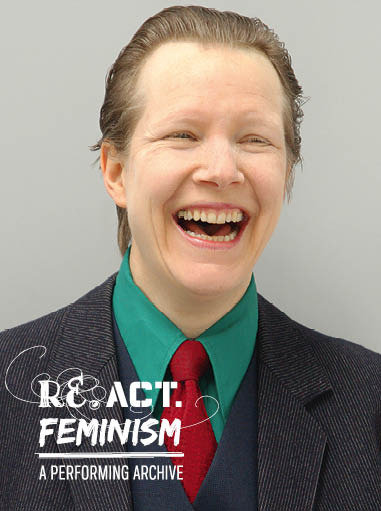 The next stop of re.act.feminism #2 – a performing archive on its tour through Europe is the Fundació Antoni Tàpies in Barcelona, Spain. The continuously crowing archive has recently been enlarged by another 14 artists and contains currently more than 233 performance documents, mostly DVD and photography by 163 artists and artist collectives. During its stay at the Fundació Antoni Tàpies, the archive will be accompanied by a series of lectures & talks initiated in collaboration with Centre de Cultura de Dones Francesca Bonnemaison, the Goethe-Institut Barcelona, the Mercat de les Flors, Irregular Section and the Càtedra d’Art i Cultura Contemporanis de la Universitat de Girona, among others. An Activity Space for educational and research activities in the form of workshops, screenings and presentations will allow the audience to further engage in current questions on performance art and feminism.

In June 2013 the mobile archive will travel to Berlin for its final presentation at the Akademie der Künste Berlin. Save the date! re.act.feminism #2 - a performing archive is a continually expanding, temporary and living performance archive travelling through six European countries from 2011 to 2013. It presents feminist, gender critical and queer performance art by over 150 artists and artist collectives from the 1960s to the beginning of the 1980s, as well as contemporary positions. The research focus is on Eastern and Western Europe, the Mediterranean and Middle East, the US and several countries in Latin America. On its route through Europe the temporary archive continues to expand through local research and cooperation with art academies and universities.

To see the detailed program in Barcelona and find out more about re.act.feminism #2 - a performing archive please visit:

The project has been organised by cross links e.V., curated by Bettina Knaup and Beatrice E. Stammer. cross links e.V. is an association established in 2007 by art professionals and academics in Berlin with the purpose of researching and promoting experimental, gender-critical artistic and cultural practice.

The project is funded by the German Federal Cultural Foundation and ERSTE Stiftung.