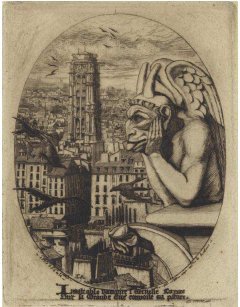 An exhibition of prints by the Paris-born artist Charles Meryon (1821-1868). His exceptional position derives from the fact that he was among the first artists in the country to rediscover the traditional technique. The "Piranesi of France" began using etching in the 1850s to depict the medieval architecture of Paris. His images often showed the city being attacked by fantastic creatures - a product of the artist's creative imagination and also a sign of his declining mental health. Meryon's etchings present Paris in a truly visionary light. The exhibition in the Saal der Meisterzeichnung (Hall of Master Drawings) presents 20 etchings by Meryon and works from the artist's surrounding. Curator of the exhibition Jonas Beyer. Image: Le Stryge (Der Vampir), 1853 C Hegewisch Collection at Hamburger Kunsthalle, photo Christoph Irrgang.