(IN)balance. Fascinated with technological innovation, Veilhan creates works that reflect historical styles and subjects yet appear futuristic. The exhibition features 18 recent works by French artist, including paintings, sculpture, and photo-based works. It is part of the Intersections contemporary art series. 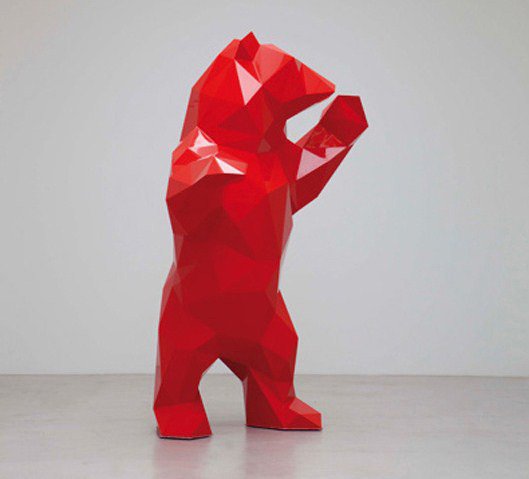 This winter, The Phillips Collection features the first major U.S. museum exhibition of French artist Xavier Veilhan (b. 1963), including 18 recent paintings, sculptures, and photo-based works. In 2009, Veilhan famously animated the gardens at Château de Versailles with a lacquered royal purple horse and carriage, and he similarly transforms the Phillips lawn at 21st and Q Streets with The Bear (2010), an angular, eight-foot-tall polyurethane beast painted in Ferrari red. The most elaborate project to date in the museum’s Intersections contemporary art series, Xavier Veilhan: (IN)balance is on view through Feb. 10, 2013.

Fascinated by technological innovation, Veilhan creates works that reflect historical styles and subjects yet appear futuristic. Digitally rendered sculptures like Xavier (2006) and The Bear (2010) refer to early-20th-century avant-garde movements such as cubism and futurism, as well as traditions of bestiary, portraiture, and statuary, while incorporating new materials and processes. In his own words, art is a “visual device which we have to look through in order to understand our past, our present, and our future.”

In addition to The Bear on the lawn, Veilhan’s installation activates two galleries on the first floor of the museum’s Sant building. Mobile n˚2 (2011)—comprised of horizontal and vertical bars suspended from the ceiling at different heights—counterbalances the stable and elegant 2010 sculpture Figure n˚5 (La Femme Nue). The mechanized, more than thirty-foot-long and seesaw-shaped Le Balancier (2007) sends a mirrored ball back and forth through the center of a gallery while two statues, the artists’ self-portraits, pose nearby. A selection of Veilhan’s Pendule-Drippings paintings, Cocarde reliefs, and photo-based works from the Ghost Landscape series are also on view.

The artist lives and works in Paris. Recently, he had solo exhibitions at Hatfield House in England and La Conservera in Spain. In August, he created a new body of works for the Neutra VDL Research House in Los Angeles, the first rendition of a project called Architectones, which will continue at modernist landmarks worldwide. He has collaborated with musician Sébastien Tellier, the band Air, designers Ronan and Erwan Bouroullec, and artist Daniel Buren. Veilhan has also created numerous public projects such as Le Monstre in Tours, Les Habitants in Lyon, and Le Lion in Bordeaux. His work has been exhibited at the Musée d’Art moderne et contemporain, Geneva; Barbican Centre, London; Fundació Joan Miró, Barcelona; Musée d’Art moderne et contemporain de Strasbourg; and Centre George Pompidou and Louvre Museum, Paris.

(IN)balance is part of the Intersections contemporary art series at The Phillips Collection, curated by Senior Curator of Modern and Contemporary Art Vesela Stretenović.

The exhibition is supported in part by the Institut Français–Ministry of Foreign Affairs.

About Intersections
In this contemporary art series, inaugurated in 2009, artists are invited to create work in response to art and spaces in The Phillips Collection. The series explores intriguing connections between old and new artistic traditions, modern and contemporary art practices, and the permanent collection and museum spaces. Videos of artists installing their work are available at www.phillipscollection.org/multimedia.

Film Screening
Veilhan’s dreamlike Furtivo (2008), starring and featuring a score by Sébastien Tellier. After the screening, Veilhan talks with the audience and Senior Curator of Modern and Contemporary Art Vesela Sretenović.
6 & 7 pm

Gallery Talk
Bon Appétit! Food in French Paintings
Whether it’s a tabletop of crumbs in Renoir’s Luncheon of the Boating Party, the raw food in Gauguin’s The Ham, or Bonnard’s palatable Bowl of Cherries, food is a focus for many French artists and a feast for the viewers’ eyes.

November 4, 2012, 2 pm
Veilhan discusses his artwork in the context of his exhibition (IN)balance, the most ambitious Intersections project to date.