The rinse cycle. The first ever full-scale survey of his work internationally and the first large-scale solo exhibition for 13 years. It will bring together more than 100 paintings, sculptures, drawings and videos from the last 25 years, including several works that have never been exhibited before. 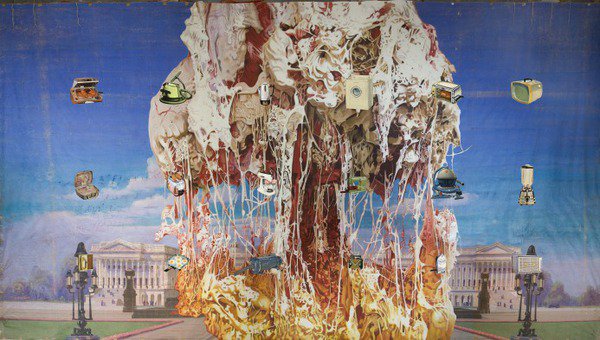 Jim Shaw (born 1952) is one of America’s most important and prolific contemporary artists. Part of a ground-breaking group that graduated from CalArts in the late 1970s including Mike Kelley, John Miller and Tony Oursler, Shaw has one of the most distinctive visual imaginations of his generation. BALTIC Centre for Contemporary Art, Gateshead presents the first ever full-scale survey of his work internationally and the first large-scale solo exhibition for 13 years. It will bring together more than 100 paintings, sculptures, drawings and videos from the last 25 years, including several works that have never been exhibited before.

Shaw’s work is informed by a relentless inquiry into the imagery of popular culture, the vernacular, art history, politics, religion and myth, as well as his own unconscious mind. An obsessive cultural cataloguer, he draws from these disparate sources to make work in distinct series that are intensively researched and often take years to complete. His first major project, My Mirage 1986- 91, charted the changing psyche of his alter-ego Billy from adolescence in middle America, to his discovery of sex and drugs then to his subsequent fall and rebirth through organised religion.

In the subsequent series Shaw examined his unconscious mind, recording and translating his nightly dreams into the Dream Drawings from 1991-1992. Creating an endless repository of inspiration for future works, many drawings have since provided the impetus for his extensive body of sculpture – the Dream Objects. Towards the end of the 1990s Shaw focused on his fictitious religion Oism, a ‘faith for the faithless’, creating an insight into its historical evolution, dogmas and rites through sculpture, performance and writing. A significant body of Abstract Expressionist- related painting also emerged from the series.

Shaw’s most recent works reveal him to be as significant a force as ever. In 2004 he began his Banner Projects – monumental banners filled with heterogeneous references to create a disorientating theatre-set vision of a schizoid America. His two-part ‘Cake’ paintings, which emerged in 2010, layer diverse art-historical and psychological references on top of inkjet prints of iced cakes from 1950s household magazines.

Shaw’s major series have previously only been presented in isolation. BALTIC’s exhibition will be the first to represent them together, along with smaller experimental projects, examining the intricate interplay between them and revealing the richness of the artist’s conceptually driven- practice for over three decades. This comprehensive presentation will confirm Shaw to be one of the most enquiring and influential artists working today, dissecting the fractured nature of contemporary visual culture and the popular imagination at an unprecedented level.

The exhibition will be accompanied by a major publication that will include new essays by Laurence Sillars, BALTIC Chief Curator, John C. Welchman, Professor of Modern Art History in the Visual Arts Department at the University of California, San Diego; Darcey Steinke novelist and journalist; poet Anne Carson and a conversation between Jim Shaw and Tony Oursler.