News of the world Gallery

News of the world Gallery, London

The installation at the gallery spans 40 years setting the Rocking Machine in the context of Makkink's most recent works. 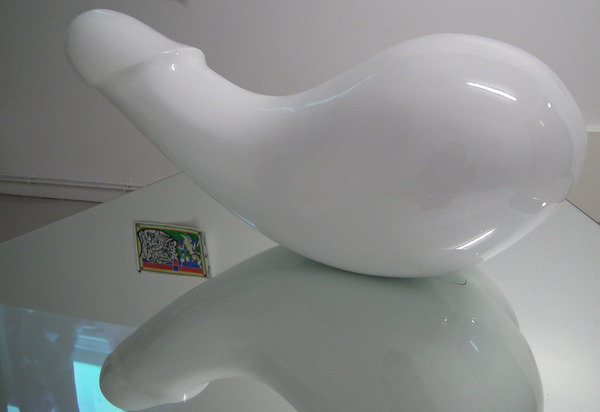 You are in a dream. Your body is in a state of suspended sensory activity. Your muscles paralysed. Your mind hovers in bright white contained space.
Scattered around that space some vaguely familiar, flattish three-dimensional objects in coordinated shades of white and black. A bit further at the back, a large shiny dark panel inclined against the wall. From where you are, you can't distinguish whether it is the thing, or the thing's support. You proceed to move towards it, to get a closer look, find out what it is. Yet as you do, it appears to glide further away without the space getting any deeper. Distance somehow remains the same.
You feel nothing. You hear voices, conversations, glasses but, as if you were on a theatre stage, you can not see anyone.
You turn around for a moment and observe the delicate isolation of the other spot lit objects placed in the room with the exquisite parsimony of contemporary set design. You resolve to stay immobile for now and to rush back at the least expected moment towards the large dark panel.
You wait...
You wait...
Now!
As you turn and accelerate back towards the end of the gallery, your mind crashes at speed into the proscenium glass and you wake up. Mind empty.

In the cinema.
The art work, with the other props, establishes the scene before the words.
There is no scope for ambivalence or complex interpretation: art in a film must 'read well'.
It must look like art.
It must support the action.
There is no time to contemplate or ambiguate. The story moves on. Action, close-up, shortcut to meaning, consolidation of narrative. Snap.
Makkink's Rocking Machine starred in two feature films: Dropout (Tinto Brass 1970) and Clockwork Orange (Stanley Kubrick 1971). In both films, the sculptural work -the surreal fusion of female hind parts with a phallus- appears to connect to an empowered, sexually liberated female character. But violent scenes quickly follow, where, in Tinto Brass, the woman is brutalised, and where, in the Kubrick, she is killed by the work itself.

The object in time
The installation at news of the world spans 40 years setting the Rocking Machine in the context of Herman Makkink's most recent works.
Time lapsed affords us the luxury to delve into the depth and complexity of the artist's work. Over time he has used extremely varied techniques and materials. Some dictated by the period: fibreglass in the late 60s used by many artists seeking a contemporary space-age aesthetic. Others by its rejection: bricks and reed, salt blocks, plaster. But always preferring blatantly impractical construction methods towards anti aesthetic installations.
What I see now:
The surreal-ish juxtaposition of disparate images or concepts which imply (or formulate) a secret link, connections and journeys across time and geographies and myths.
Drawing as a sort of Joseph Cornell mind-box played out in a human dimension
Images of latent chaos, ruins and disorder, or where the work itself is pregnant of its own disintegration.
In between:
The works created by the desire to shock, or in the hope to please, or because you did not care or cared too much.
And what is still important to you today.

stampa
permanent link
News of the world Gallery
IN ARCHIVIO [2]