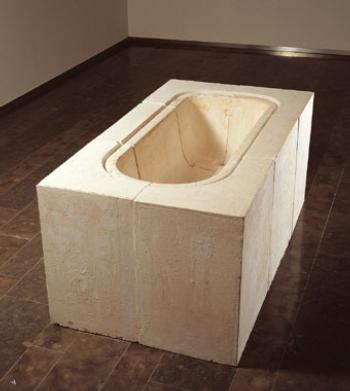 Andy Warhol did it... and in the 80s and 90s a large number of other artists did it: employed objects and images from reality directly in their art. This summer ARKEN presents their art in the exhibition BULLâ€™S EYE. It is a unique opportunity to see works that are only rarely available to the public. Mannequins, vacuum cleaners, light chains, cigarette butts, food and medicine, bathtubs and bookcases, Nike shoes and McDonaldâ€™s. Reality is at the centre of this summerâ€™s art at ARKEN. With humorous distance and critical bite the exhibition undermines our notions of what is fiction and what is fact. The result is a series of works that teach us about reality.

The artists employ objects and images from reality directly in their works. Jeff Koons has manufactured a gigantic piece of kitsch in fragile, gilt porcelain â€“ a sculpture portraying the pop star Michael Jackson with his favourite chimpanzee, Bubbles, done from one of the musicianâ€™s own publicity photographs. Photographers Cindy Sherman and Richard Prince employ already existing photographs from movies and advertising, twisting them, draining them of credibility and making them appear as staged, sham ideals that remove us from reality. Prince re-photographs the famous Marlboro cowboy, creating cracks in the seductively smooth advertising aesthetics with blurred optics.

Other artists use their own body in their efforts to disclose reality. Charles Ray casts his genitals and places them on an otherwise totally stereotypical mannequin; Marc Quinn presents a ripped up cast of his body; and Janine Antoni gets down on her hands and knees, leaving her imprint on a piece of cow skin.

The museum opened ten years ago in the centre of Oslo. A curious and ardent novice of contemporary art, Hans Rasmus Astrup began collecting international contemporary art in the late 1960s. Twenty years on the size and significance of the collection had grown to such an extent that he felt the public should have the opportunity to see it. This led to the foundation of the Astrup Fearnley Museum. The museum adheres to the founderâ€™s attention to the new by showing changing exhibitions. Therefore the collection is only rarely on display.