22 international artists that look and act like paintings. On show works made of mercury, t-shirts, shampoo, flies, tar and feathers, fabric, mirrors, salt...but no paint. 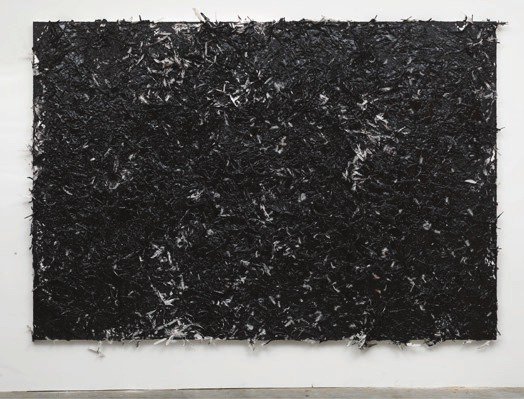 What makes a painting a painting? Paint? Canvas? A frame?
This show presents works by 22 international artists that look and act like paintings.
They are paintings, without paint. There are works made of mercury, t-shirts, shampoo, flies, tar and
feathers, condensation, fabric, mirrors, salt, vegetable dye, broken glass, aluminium, chemicals,
newspaper, 24-carat gold, fabric, pills, emergency blankets, wood, broken glass ... but no paint.
The show asks what defines a painting? All of these things make paintings, but how? Where are the
boundaries and what do we think the rules are?

Frank Ammerlaan (1979, NL)
Ammerlaan lives and works in London. Having done research with chemists and scientists for a number of years, his recent practice has developed into making paintings with chemicals. Following his MA show at the Royal College of Art he has won the Land Securities Studio Award and the Royal Award for Painting in The Netherlands in 2012. He is currently showing at Upstream Gallery, Amsterdam.

Steve Bishop (1983, UK)
Bishop lives and works in London. His work often deals with the balance between the formal and associative qualities of objects and materials. He has recently shown at Supplement (London), Anthony Reynolds Gallery (London), Stadium (New York) and is currently showing at Koal Galerie in Berlin.

Boyle Family (Mark Boyle 1934-2005, Joan Hills 1931, Sebastian Boyle 1962, Georgia Boyle 1963, all UK)
The Boyle Family is a group of collaborative artists based in London. They are best known for their earth studies. Three-dimensional casts that combine real material from a random site with colour and resins, preserving the form of the ground to make unique one-off pieces. They showed at Modern British Sculpture, Royal Academy, 2011. Their works are in the collections of Tate (London), Tokyo Metropolitan Museum, Museum of Contemporary Art (Chicago), National Gallery (Berlin), Arts Council of Great Britain and San Francisco Museum of Modern Art among others.

Alex Da Corte (US)
Da Corte’s sculptures utilise objects and ideas that our society adores, consumes and discards. Examining items from the grocery store, street corner or supermarket, he hopes to resuscitate a romantic language and failed iconography that caught our collective interest for a moment and then faded. Selected solo shows include Joe Sheftel Gallery (New York) and Galerie Olivier Robert (Paris). He is currently showing at Mothers Tank Station (Dublin)

Graham Dolphin (1972, UK)
Dolphin lives and works in Newcastle. He works are often remakes of the public shrines and tributes made by fans as memorials to dead rock stars. As with saintly relics they are an attempt to make tangible the intangible. Solo shows include Växjö Konsthall (SE), Regina Gallery (RU) and Seventeen (UK). His work is currently showing at Nasjonalmuseet, The Museum of Contemporary Art, Oslo and has recently been shown at KIASMA, Helsinki and Dublin Contemporary Biennale.

Jürgen Drescher (1955, DE)
Lives and works in Berlin. Drescher works with casts and moulds of everyday objects familiar to us all. After a process of selection, he appropriates these objects by means of sculptural techniques and abstracts them into the sphere of art by translating them into materials such as aluminium, treated synthetic resins, or silver and gold. He has a solo show at Badischer Kunstverein (Karlsruhe). Solo shows include Galerie Rodolphe Janssen, Brussels, Martin Klosterfelde, Berlin, Mai 36, Zurich.

FOS (1971, DK)
FOS is a Copenhagen based artist. His artistic practice is based on a constantly developing concept called ‘Social Design’, a specific way to construct a room or a place for the purpose of making people aware of the social processes between them. He has exhibited internationally both as a solo artist and as a part of the artist group Pars Electronic (with Kasper Bonnén and Tal R). In 2010, he was given the “Carl Nielsen’s and Anne Marie Carl-Nielsen’s Award”. Solo shows include Max Wigram, London, Camden Arts Centre, London, Andersen Contemporary, Copenhagen, Statens Museum for Kunst, Denmark.

Damien Hirst (1965, UK)
Hirst lives in Devon and has studios in London, Gloucester and Devon. Hirst is the most prominent artist of his generation. Throughout his work, he has taken a direct and challenging approach to ideas about existence. This show will present a fly painting and a pill painting. Since 1987, he has had over 80 solo exhibitions worldwide and his work has been included in over 250 group shows, most recently a major retrospective at Tate Modern, The complete Spin paintings, Gagosian, Two weeks One summer, Pinchuk Art Centre, Kiev.

Henry Krokatsis (1965, UK)
Krokatsis lives and works in London. He works with a wide range of materials – smoke, found wood, broken glass, antique mirrors. Common to most of his work is the attempt to convey an atmosphere, the feeling of something intentionally unspecific, uncanny. Solo shows include David Risley Gallery (Copenhagen) and Galeria Leme (São Paulo) and he has recently shown at Vigo (London), and Peggy Guggenheim Collection (Venice).

Allan McCollum (1944, US)
Lives and works in New York. The Plaster Surrogates series, are clustered together in what appear to be monochromatic paintings, however, these are actually plaster objects whose black surfaces yield no images or painterly incident, confounding viewers' expectations. McCollum has had over 100 solo exhibitions, including retrospectives at the Musée d'Art Moderne, Villeneuve d'Ascq, France (1998), the Serpentine Gallery, London (1990); the Rooseum Center for Contemporary Art, Malmo, Sweden (1990), Stedelijk Van Abbemuseum, Eindhoven, The Netherlands (1989), and Portikus, Frankfurt, Germany (1988).

Elizabeth Newman (1962, AU)
Lives and works in Melbourne. She has been making and exhibiting art throughout Australia and overseas since the 1980s. A painter by training, she has expanded her practice over the years to include wall works, objects, text-based works and writing. Recent exhibitions include Artists Proof #1, Monash University of Modern Art, Rays on the Shutter, Galleria Duemila, Manila; Discreet Objects, Utopian Slumps, Melbourne, Lights On, Neon Parc, Melbourne and The Unprecedented Light of The Dark Letters, CAST, Hobart. Her work is included in The Chartwell Collection, Auckland Art Gallery, The National Gallery of Australia, Heide Museum of Modern Art, Artbank, The Kerry Stokes Collection, The Dobell Foundation Collection.

Torben Ribe (1978, DK)
Ribe lives and works in Copenhagen. He ia an artist who moves freely between styles and genres in order to explore an ongoing interest in the purely visual, formal and conceptual aspects of art. Since he graduated in 2006 he has exhibited in several galleries and museums around Scandinavia, more recently in the group show “Oil on Water Calming Effect” in Stavanger, Norway. Torben Ribe was nominated for the Carnegie Art Award in 2010.

Troels Sandegård (1979, DK)
Sandegård lives and works in Copenhagen. He works mostly with installations and sculptures, with a particular interest in spatial experience and the physical contents of air, revealing the invisible, making the abstract physical. He graduated from The Royal Academy of Fine Arts in 2007. Since then he has exhibited at places like Kunsthal Charlottenborg, Roskilde Museum of Contemporary Art and more recently he has had solo shows in Milan, Berlin and Riga.

Amikam Toren (1945, IL)
Lives and works in London. In Toren’s practice, the objects and actions of everyday life are processed and reinterpreted. In most of his works the material and purpose of an object is represented to richly expose its potential for further meaning. He has had solo exhibitions in many major venues including the Serpentine Gallery, Ikon Gallery and Arnolfini. His work has featured in the Venice Biennale and in public exhibitions in Switzerland, France, USA, Austria, Germany, the Netherlands and Israel.

Keith Tyson (1969, UK)
Tyson’s expansive practice may be most readily defined as an engagement with systems. A system is a means of ordering and negotiating ideas and things. Tyson is faithful to systems because they allow him to be open to the infinite complexity of the world. His paintings, drawings, and sculptures have been the subject of more than 20 solo exhibitions since 1995 and over 100 group shows since 1990. His work is held by important collections including the Museum of Modern Art (New York), Tate Modern (London) and Centre Georges Pompidou (Paris).

Mette Winkelmann (1971, DK)
Winkelmann lives and works in Copenhagen. She explores abstraction in various media. In her works she often uses systematic compositions, geometric divisions, forms and colours drawn from the craft traditions of various cultures. She has exhibited at several galleries and museums in Denmark, including Herning Kunstmuseum and Den Fri (Copenhagen). She has also shown at the International Women’s Art Festival in Syria and at Zsa Zsa Gallery in Toronto.