A tool for the making of signs. The artists work in collaboration to produce provocative and interrogative works that are often concerned with the mythic potential of art. For 'Artes Mundi 5' Phil Collins presents a video installation in caravans outside Chapter. 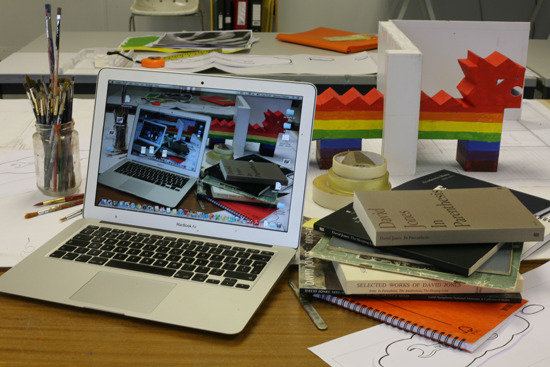 Joanne Tatham & Tom O’Sullivan work in collaboration to produce provocative and interrogative works that are often concerned with the mythic potential of art.

Utilising sculpture, painting, architecture, performance, literature, institutional critique and curation, the artists re-stage and re-present a vocabulary of images, phrases and forms that are part of a common history to create carefully crafted paths, displacements and diversions. These act as a tool for exploring the world of art - with its own collective mythology of forms, objects and histories.

A tool for the making of signs features a number of elements intended to challenge and confound easy interpretation, not least of which is the cartoon motif that appears on the lightbox and exhibition leaflet.

In the Gallery, a large-scale structure positions itself awkwardly in relation to the Chapter architecture, creating an improbable physical and conceptual disjunction. The structure adopts the symbol of the 'dragon' which, presented as it is in Tatham and O’Sullivan’s stylisation, provokes particular resonances for Welsh national identity and yet nevertheless retains the potential for more primal and multiple meanings.

The structure operates as both analogy and counterpoint to the inclusion in the exhibition of two works by painter and modernist poet David Jones. By integrating his works into the structure itself, the artists ask us to consider how contemporary artists look back to previous artistic practices and incorporate this interest as part of a current discourse.
Biography

Joanne Tatham and Tom O’Sullivan have worked collaboratively since 1995.

Until 13 January 2013
Phil Collins This Unfortunate Thing Between Us, 2011
Video installation in caravans outside Chapter’s entrance, free.