This group exhibition presents drawing, moving image and sculptural installations which engage with the distance of touch. Today, to touch doesn't mean the same thing it used to. By merging the hand with the machine, contemporary technology generates a detached sense of proximity. 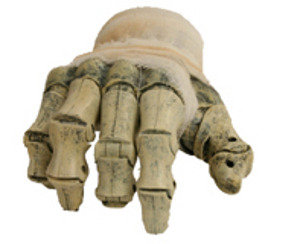 Detouched isn't a word. As a word that isn't a word, it exists somewhere between retouched and detached. It's also fairly close to untouched, which means that it has a lot to do with touch. It might be best understood as describing a detached sense of touch, or an act of touching that doesn't involve an act of touching, however paradoxical that may sound.

Today, to touch doesn't mean the same thing it used to. By merging the hand with the machine, contemporary technology generates a detached sense of proximity, or a sense of detouch. This exhibition presents drawing, moving image and sculptural installations which engage with the distance of touch.

Detouched isn’t a word. As a word that isn’t a word, it exists somewhere between retouched and detached. It’s also fairly close to untouched, which means that it has a lot to do with touch. It might be best understood as describing a detached sense of touch, or an act of touching that doesn’t involve an act of touching, however paradoxical that may sound.

Part of what’s impressive about the Internet is that it’s infinite, immaterial, and uncontainable—it’s untouchable—but I still touch it many times a day. I’m touching information that exists in the cloud—a cloud that isn’t actually a cloud—and the entire world, as the saying goes, is at my fingertips. After a century of technology dedicated to inventing tools that replace manual labour, we find ourselves brought back to the hand—the first, oldest, and most basic human tool. It makes sense: the digit and the digital make a natural pair.

But today, to touch doesn’t mean the same thing it used to. Touching an object no longer requires being next to it, but involves being far away from it. By merging the hand with the machine, contemporary technology generates a detached sense of proximity, or a sense of detouch—it not only incorporates but also negates, prevents, and replaces one sense of touch with another. Detouched is about the distance of touch.

Dennis Oppenheim’s Air Pressure (Hand) (1971) is a film featuring a close-up view of a single hand. From outside the frame, an invisible high-pressure air source directed towards the hand makes the skin on its surface undulate. For her five-channel video installation touch parade (2011), A.K. Burns re-enacts a series of five “plastic love” YouTube clips. Connected across vast distances via the Internet, these object-touchers share their personal and intimate fetishes—crushing eggs underfoot, pumping car pedals, putting on layers of rubber gloves. Alice Channer’s sculpture rub marble up against metal in floor sculptures that evokes the body as much as the machine. Seth Price’s vacuum formed works are forms of extreme touching—plastic wraps itself around objects in a way that preserves their shape, but separates them from the world behind a synthetic skin. In her large-scale paper works, Sunah Choi revisits the ancient tradition of frottage or rubbing, bringing them into a language of abstraction and urbanity.

None of the works included in Detouched can be touched, but all of them evoke the sense of touch. Please feel free to detouch them all you want.

Alice Channer b. 1977, lives and works in London UK. She completed a BFA at Goldsmiths College 2006 and continued her studies at the Royal College of Art, London, completing her MA in 2008. Her forthcoming solo exhibitions include ‘Invertebrates’ at The Hepworth Wakefield, February 2013, and at Kunstverein Freiburg, Germany, in September 2013. Her work will also be shown as part of ‘Drawing: Sculpture’, Drawing Room, London in February 2013. Recent solo exhibitions include ‘Cold Blood’ at Lisa Cooley, New York (2012); ‘Out Of Body’ at South London Gallery, UK (2012); ‘Body Conscious’(2011) and ‘Worn-work’ (2009) at The Approach, London; ‘Other-Directed’ (2011) at BolteLang in Zurich; and ‘Inhale, Exhale' (2010) at the Mackintosh Gallery, Glasgow School of Art, as part of the Glasgow International. She has participated in numerous group exhibitions, including at Whitechapel, London; Raven Row, London; Tate Britain, London; Stuart Shave Modern Art, London; Tanya Bonakdar Gallery, New York; Lisson, London; Hayward Gallery Touring, UK.

A.K. Burns b. 1975, lives and works in Brooklyn, NY. She completed a BFA, Rhode Island School of Design, Providence, R.I in 1998 and an MFA, Milton Avery Graduate School of Arts at Bard College, Annandale-on-Hudson, NY in 2010. Burns is a founding member of the artists activist group W.A.G.E. (Working Artists and Greater Economy), and co-editor of RANDY, an annual trans-feminist arts magazine. Recent exhibitions include Pregnant Patron Penny Pot Callicoon Fine Arts, New York, Community Action Center in collaboration with A.L. Steiner, Taxter & Spengemann, New York, Double or Nothing, TAG, The Hague, Netherlands, In Practice: You never look at me from the place from which I see you, Sculpture Center, Queens, NY.

Anthony Huberman is a curator and writer based in New York, where he is the founding director of The Artist's Institute and a distinguished lecturer at Hunter College. Previously, he worked as chief curator of the Contemporary Art Museum St. Louis, curator of the Palais de Tokyo, Paris, and curator of SculptureCenter, New York, and has organized a wide variety of independent projects around the world. He has written for magazines such as Artforum, Afterall, Dot Dot Dot, Flash Art, and Mousse, among others, and is a contributing editor to Bomb magazine.

You are welcome to join us for the opening of Detouched from 6pm - 8pm on Thursday 24 January 2013 and for a floor talk about the exhibition by guest curator Anthony Huberman before the opening at 5pm.