In that Weird Age

The exhibition highlights a music culture in transition, showcasing the odd splendour of plenitude that currently arises from now defunct physical storage media and the end of fixed recordings, as well as from the new musical vernacular of internet user cultures, the exponential potency and open-ended processability of digital sound files. 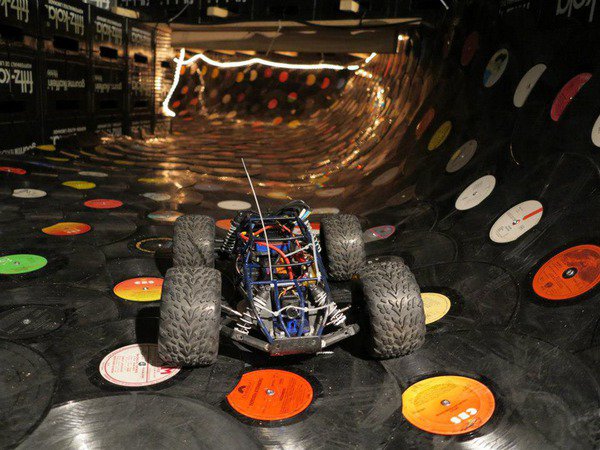 In That Weird Age highlights a music culture in transition, showcasing the odd splendour of plenitude that currently arises from now defunct physical storage media and the end of fixed recordings, as well as from the new musical vernacular of internet user cultures, the exponential potency and open-ended processability of digital sound files, the amassment of immaterial artefacts in online archives, and the promiscuous connectivity of a general state of plenty, where everything exchanges with everything.

Playfully addressing these phenomena from different angles, the exhibition also shows that although they appeared under many different names over the last years, such phenomena all lead to a perceived synchronicity, or an ubiquitous appearance of art and sound in everyday lives. This in turn has created that uncanny and weird experience of time that many now experience.

In physics the notion of time is a flexible one, probably best described with the theory of the relativity of simultaneity. The idea is that simultaneity – when two events occur at the same time – is not absolute, but depends on the observer’s frame of reference. Brought into its modern version by Einstein in his Theory of Relativity, the idea is often expressed via the famous train-and-platform experiment suggested by Einstein in 1917. The experiment stars two observers, one on board a train (and so within the intertial frame of reference of the train), and the other on a platform, in a stationary frame where “forward and backward” or “past an present” act as reference points. A flash of light is given off at the center of a train car just as the two observers pass each other. Because s/he is in the inertial frame of the moving train, the onboard observer sees the front and back of the train car at fixed distances from the source of the light, and, as such, observes that the light reaches the front and back of the car at the same time. The observer standing on the platform, however, sees the rear of the train car moving (catching up) toward the point at which the flash was given off in the first place, and the front of the train car moving away from it. The light headed for the back of the train thus has less distance to cover than the light headed for the front, and as such will reach the end of the train faster, according to this observer.

Now picture the Internet as the train, a space where we can access its multiple realms from all directions, and where notions of linear time, past and present, dissolve. Only the algorithms of search engines and archival platforms such as YouTube assign relationships here, clustering items into search results or suggested viewing content. All digitalisable material exists on the same timeline, which is actually no longer a line, but a single point called Now.

In recent years, the prefix “retro” has entered the limelight to such an extent that “retromania” is seen by some as a manic addiction to the past that taints creativity in music, and especially in pop music. A similar phenomenon was observed in other artistic domains, for example through the rediscovery of classical formats, tools, and materials in the fine arts. Regardless of their realm, artistic productions saw and are seeing a tendency to re-evaluate the past. This re- evaluation is emerging along two major planes; either through a positivist embracing of the past, or via the rejection of retro as a deceptive misreading of glorious past promises, a travesty where nothing is truly new but only the result of mere recombination fully unleashed due to the dissolution of concepts of history, lineage, and time. How one sees this re- evaluation, is therefore again a question of perspective. This plentifulness of materials also triggers a new situation that artists, and in the end also the viewer, must come to terms with; the artist and viewer’s positions are dissolved as artists become browsers and viewers become processors, leading to, for example, the endless DIY YouTube reactions/ interpretations of artistic works that can currently be found.

This timeless and fluid environment underlies the artistic works presented within the CTM.13 Exhibition. While different frames of reference and artistic points of view contribute to a diversity of approaches, the phenomenon of YouTube as an audio-visual archive or cultural database is a core reference point for the Exhibition as it explores the Internet as a huge source for relational works, where notions of history and ownership are being replaced by memes and massive clusters. A second narrative within the Exhibiton explores ways in which to deal with antiquated mediums such as vinyl records, CDs, and tapes. These seem to either be transformed into commemorative objects or into mere shells of their former promises, or are reused in a way that has nothing to do with the medium’s original purpose.

Suffusing these approaches is the unsettling question of how to deal with today’s seeming over-abundance, and the resulting dualism of pessimism/ optimism that states that true originality and innovation has reached an end, predicting the “death” of music and the arts, on the one hand, and proclaims fully unfolded opportunities for all and everyone on the other – all cast in the agonizing environment of late capitalism’s attention economy. For now. Artists: Ben Coonley (US); Alexander Dorn (DE); Carl Schilde/ Heavylistening (DE); Constant Dullaart (NL); curatingyoutube.net (DE); Doppeldenk (DE); Lucas Abela (AU); Matthias Fritsch (DE); Nam June Paik (KR); Network Awesome (US/DE); Tabor Robak (US); Tim Tetzner (DE) und weiteren...