This exhibition focuses on the ties between the protocol-based nature of silver-based photography and the process-based nature of post-conceptual practices. Silver-based photography involves a painstaking protocol whose development and printing in the laboratory are necessary steps for images to appear. Works by Meris Angioletti, Simon Starling Eric Baudelaire, Jacob Kassay, Lisa Oppenheim and many more. 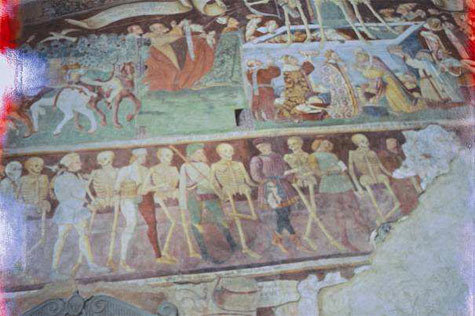 In her essay Tracing Nadar, Rosalind Krauss analyses an image made by the photographer and his brother in 1854: it shows mime Charles Debureau with a camera, “miming the recording of his own image.” Krauss points to the reflexive nature of the image, which involves the white surface created by the mime’s costume and a series of traces constituted by the shadows of the hand and the camera standing out against the white backdrop. She writes that “the aspirations working in this photograph are to surpass the condition of being the merely passive vehicle of the mime’s performance. They are to depict the photograph itself as a complex sort of mirror. […] [T]he photograph stages […] its own constitutive process as a luminous trace […].” Against received ideas, the reflexive nature of photography thus appears as constitutive of its history.

This exhibition focuses on the ties between the protocol-based nature of silver-based photography and the process-based nature of post-conceptual practices. Silver-based photography involves a painstaking protocol whose development and printing in the laboratory (developer, stop bath, fixer) are necessary steps for images to appear. Paradoxically, just as silver-based photography is becoming obsolete, its protocol-based nature is resurfacing, generating works in which the “production line” of a photography has been taken apart. Physical-chemical processes are no longer the sole means for the image to appear, but the objects of works that may tend toward other media (painting, sculpture, installation…). In the exhibition, works by Blanca Casas Brullet, Dominique Blais or Juliana Borinski epitomize this diversion. Blanca Casas Brullet’s sculptures Esborralls are folded papers made rigid with a silver coating whose material literally helps shape the image. In Dominique Blais’s installation Ring, the residue of a melted candle cast in bronze is a reminder of the flame that once burned in front of the pinhole camera. During the screening of Juliana Borinski’s LCD (Liquid Crystal Display), a slide records the phenomenon of crystallization at the same time as it displays it.

In the chaotic fate of photography, tinged from the beginning with both positivism and belief, analyzing the constant aspects of an almost magical phenomenon, preserving its rites, may amount to a Romantic wager. Inscribing the process of image-making in the image itself as an attempt to preserve (Lisa Oppenheim, Heliograms, 2011) or, on the contrary, as a challenge to an eminently reproducible art (Sébastien Rémy, Monique Simonet, Spiricom, 2010) opens as many entry points into the exhibition. Silver salts still interfere with matter, with the explicit ambition, not to capture the real but, rather, to compose an alternative to its representation through these elementary particles.