Everyone's Camera. In the exhibition she continues her exploration of the medium and history of photography. An atmospheric quality runs throughout the works on view, in which pattern, repetition, and the surface of the photograph itself play a central role. 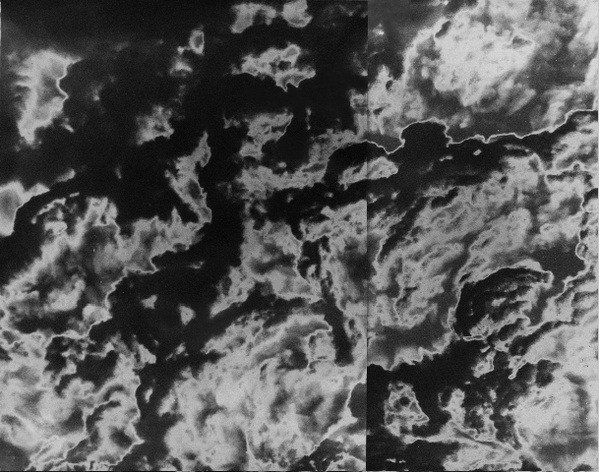 Kunstverein Göttingen is pleased to present Lisa Oppenheim’s (*1975) first solo exhibition at a German institution. In the exhibition she continues her exploration of the medium and history of photography. An atmospheric quality runs throughout the works on view, in which pattern, repetition, and the surface of the photograph itself play a central role. Her images of the moon, billowing smoke, flower arrangements, and patterned fabrics are produced without the help of a camera. Instead, the images are created with negatives that stem from the Internet, or Oppenheim makes photograms by using fabric or supermarket flowers that are placed directly on the photographic paper. With motifs that revisit early artistic photography combined with the saturated black or metallic sheen of the paper, Oppenheim’s works constitute a veritable homage to the hand-made print. But despite the lushness of her borrowed imagery, neither romanticism nor nostalgia gains the upper hand. Using appropriation, visual reduction, and serial arrangement the artist engages in a subtle reflection on conflicts that continue to define the photographic medium: between the documentary and the symbolic, between representative and the abstract.

The series “Smoke" (2011/2012) is based on photographs from both historical archives as well as contemporary online sources – images ranging from a volcanic eruption, to the London riots, or a bomb attack from World War II. Oppenheim re-exposes selected segments of the images with the help of a burning match. The resulting solarization reverses lights and darks, causing the images to resemble pictures of clouds, specifically referencing Alfred Steglitz’ famous "Equivalents” series. Parallels between the source of the smoke and production of image invoke fire and destruction as unseen forces – revealed only in the titles of the works – which seem posited against Steglitz’s lyrical attempt to depict the universal and the sublime.

Created by similar processes, Passage of the moon over two hours, Arcachon, France, ca. 1870s/August 11 & 17, 2012 and Heliograms are also based on early, concerns with depicting natural phenomena, but these 19th century images tended to be scientifically motivated. In contrast, Oppenheim’s reproductions emphasize process and even performance. Whereas image the moon’s progress across the night sky in France was simply re-exposed to the moonlight of the artist’s native New York, the Heliograms seem to function as a chronicle or calendar, in which the negative was exposed to daylight multiple times over the course of the day, beginning at dusk, with the intensity of the print reflecting the light conditions at the time. The different gaps in various sequences represent omitted photographs from times of the day when the artist could not make an exposure. Thus images that once were considered miraculously objective representations of heavenly bodies assume a highly personalized and implicitly biographic character.

Other series such as Liesure Work or Language of Flowers, photograms created with antique lace or flowers symbolizing various sentiments seem point to a feminine or domestic frame of reference. But while the one series speaks to the unseen toil of lace-making - historically performed by women - as paralleling Oppenheim’s practice in the studio, the second uses only the headless stems of flowers that once served as Victorian tokens of regard to create bright and aggressively hard-edged compositions.

Finally, Fish Scales, Véritable Hollandais , 2012 is a series of photograms made with mechanically produced textiles from the Netherlands that mimic the handmade batiks of Indonesia but are marketed and sold as “authentic” African fabric. For each exposure in the series the cloth is placed directly on the photographic paper and folded at different angles yielding various moiré-like patterns. Unique prints are thus made from a commercially replicated pattern, whose origins challenge the notions of the original and the copy. Set apart from the other works in its reference to contemporary modes of production and distribution, Véritable Hollandais underscores tensions between the archival and the indexical nature of the photograph, between the image as a cultural artifact and its endless iterations of the world we inhabit.

Lisa Oppenheim was born in New York (1975). She studied film and video at Bard University and took part in the Whitney Independent Studio Program. From 2003 to 2005 she was a resident at the Rijksakademie in Amsterdam. Her work has recently been exhibited at the Deutsche Guggenheim, Berlin, the Belvedere Museum, Vienna, and the Ricard Foundation, Paris.

An artist book is being published in conjunction with the exhibition.