By means of videos, photo works, and sculptures, Altindere analyses the reality of his country, Turkey, by highlighting the tensions that generate binomials as tradition/modernity, nation/identity and society/government. 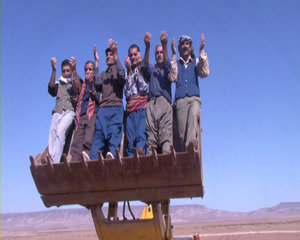 By means of videos, photo works, and sculptures, Halil Altindere analyses the reality of his country, Turkey, by highlighting the tensions that generate binomials as tradition/modernity, nation/identity and society/government. Simultaneously, Altindere draws attention to the notions of community and control, delving the nature of power. For this, the artist does not rely on direct references, but on apparently anecdotic elements that gain full dimension thanks to the viewer's complicity.

Halil Altindere takes over as well as challenges how Pop and Fluxus operate, two movements already introduced in the European art tradition, that, indeed, he tailors to his own idiosyncrasy due to his "distance" from that tradition. Altindere thrives on Pop in his use of disparate elements from contemporary Turkish visual tradition and his ability to take and alter symbolic elements from the system which Altindere places under scrutiny. From Fluxus mainly emerges the affiliation of the art piece to its revolutionary quality, being added to the sum of "floods and tides" claimed by George Maciunas, as well as his objection to fetishization of the art work, simplicity and humor.

Altindere's work continuously challenges the notion of authority, power and control. Rather than political, Altindere's work is inserted into micro-activist practices that interfere in the symbolic space which seems to be beyond the scope of the political discussion. For that, Altindere always draws on irony. Altindere generally applies quotations on already existing concepts, but operating a single change that alters its full sense, as in the Mobese piece, where he reproduces a mast and telescopic cameras from Istanbul Taksim plaza, but built with a shining metal, making visible all that was meant to be not visible. At other times, that irony leads to the absurd, as the scene from Oracle where a man in a suit surfs on an ironing board in the middle of a dam.

CA2M reviews Altindere's work under three basic lines. The first one, and most important, follows his positioning regarding contemporary Turkish society, subject to intense changes in the last decades. The show also targets the attitude of the artist towards a globalized art world, displaying some of his works in response to previous invitations in great shows. The shift of his working method, critical and challenging, toward other contexts launches a mechanism that questions art itself as well as dynamics that, within the system itself, are understood as normal. Finally, the exhibition tours the important role of Halil Altindere within the Turkish art scene. Through exhibitions where he has been a curator himself, as well as editor of the magazine Art-ist, Altindere has achieved to create a bridge for generations by putting in place a serial of fertile personal and artistic relationships which are now the cultural panorama of Istanbul.

The exhibition and the catalogue has been supported by Saha Association.