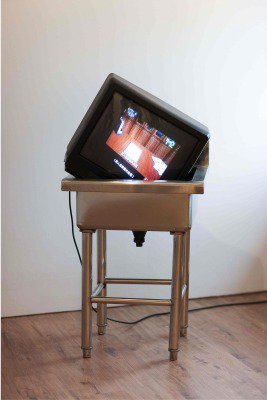 Chen Shaoxiong and Liu Ding are conceptual artists that started to collaborate some years ago for “Project without Space”. In this project, each artwork is created through the combination of new medias and painting. The project would like to investigate the interaction between contemporary Chinese art and the history of western art.

Chen Shaoxiong (1962, Guangdong) is an artist whose works start from a traditional technique - like the ink on paper – and undergo an elaboration in a contemporary way. “Collective Memory” series are large size canvases painted through the artist’s own fingerprints. They are the most famous series of Chen Shaoxiong. About this series the artist said:

Everyone has memory about the environment where he stays. The memory includes personal experiences and the time that nobody can evade. (…)Photos are memorial records, which allow people who share the same memory to identify themselves while looking at them. (…) In this modern time, the changing of environment is faster than the changing of human being’s memory.

Liu Ding (1976, Changzhou) is one of the outstanding young artists in the international contemporary art scene, thanks to his sharp shrewdness, his deep knowledge and an extraordinary aesthetic sensibility and expressive ability. Exhibited artworks are the last pieces of a series of researches Liu Ding has been carrying out for some years: starting from his own art practice and pieces, the artist creates new artworks:

The idea is to reflect on my own thinking and practices as an artist. To use my own works (material manifestations of my ways of thinking about art and life) as the sources for discussions and critical examination.