"Une exposition parlee" is the first exhibition conceived by Mathieu Copeland as part of the Jeu de Paume's Satellite program envisages the exhibition of the word and the diffusion of an entire work orally. Organised in four parts, the exhibition "Laure Albin Guillot: The Question of Classicism" allows one to discover her art of portraiture and the nude. Adrian Paci's work (here with "Lives In Transit") is characterised by its capacity to create a tension between the conflictual and the marvellous. 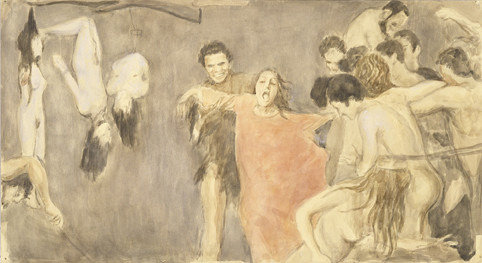 A SPOKEN WORD EXHIBITION
Suite for Exhibition(s) and Publication(s), first movement.
A proposal by Mathieu Copeland.
26 February - 12 May 2013

The – read – text makes possible its interpretation, thus becoming its score as well as its memory. “An exhibition to be read” generates figures to be said, the abstraction of language enabling a form to come into being and, naturally, once uttered, to dissolve. In parallel with this exhibition through the book a series of “spoken retrospectives” is presented. Gustav Metzger, who uses destruction and impermanence as motifs in his work, David Medalla, through the ephemeral and the impromptu, and others are invited to record with their voices an ideal retrospective of their work, or their lives. The motive and materiality of this undertaking can only exist – survive – through the non-documentary exhibition of a radical work, one that avoids as far as is possible the classic presentation of the retrospective. Each retrospective exists only through the words spoken by artists – through the memory of those who have created – thus generating the mental image of an exhibition of time (time of a work whose disappearance affirms its existence, time of a past life) in the minds of those who are listening.

The work of Adrian Paci (born in 1969 in Albania) underlines one of the paradoxes of human intelligence, which consists of becoming aware of reality through irreality. Often inspired by subjects close to him, stories arising from his everyday life, Adrian Paci lets them slide poetically towards a fiction, which in its turn creates one or more wider realities. The exhibition at the Jeu de Paume gathers extremely diverse works (videos, installations, paintings, photographs and sculptures) made since 1997 and shows the numerous interconnections that operate between these different media and means of expression.

Paci’s work is characterised by its capacity to create a tension between the conflictual and the marvellous. With a certain romanticism, he is conscious of the stakes at play between contemporary artistic creation and possible forms of resistance.

In 1997, Adrian Paci escaped violent riots in Albania to take refuge, with his family, in Italy. On his arrival in the country, he temporarily abandoned painting and sculpture in favour of video, thus exploring new cinematic languages and means of expression. His experience of exile, the shock of separation and adaptation to a new place define the context of his first videos, through which he attempts to discover the roots of his past.

“The fact of being at a crossroads, at the frontier of two separate identities, underlies all my work on film.” (Adrian Paci)

Gradually, Adrian Paci has distanced himself from his personal experience to treat collective history, in projects that put the emphasis on the consequences of conflicts and social revolutions, revealing how identity is conditioned by the socio-economic context. Working with non-professional actors, men and women in difficulty, he explores many of the existential and social problems of our epoch: migration, mobility, loss, displacement, globalization, cultural identity, nostalgia, memory...

After representing Albania at the Venice Biennale in 1999 and exhibiting at the MoMa PS1 in New York in 2005, his work has been the subject of numerous solo exhibitions: Moderna Museet in Stockholm, Kunstverein, Hanover, Tel Aviv contemporary art centre, Bloomberg Space in London and Kunsthaus Zurich. Among numerous group shows, he has participated in Manifesta 3 in Ljubljana (2000), Venice Biennale (2005), Tate Modern, London (2008), Maxxi Rome, Lyon Biennial and Havana Biennial (2011).

His training as a painter permeates his videos and photographs, where light and chiaroscuro hold a symbolic role, Adrian Paci is also particularly attracted by portraiture, which he uses magnificently in the videos Centro di Permanenza Temporanea, 2007, and Electric Blue, 2010.
The tension between the moving image and the fixed image is at the heart of an approach founded on the principle of “the continual movement from reality to the metaphorical”. Along with a selection of early works (Albanian Stories, 1997; Home to go, 2001; Piktori, 2002; Vajtojca, 2002...), Adrian Paci presents recent pieces, including The Encounter, 2011, Inside the Circle, 2011, and The Column, a video installation created specifically for his exhibition at the Jeu de Paume, accompanied by the marble column presented in the Jardin des Tuileries to the right of the entrance.

Laure Albin Guillot (Paris, 1879–1962), a “resounding name that should become famous”, one could read just after World War II. Indeed, the French photographic scene in the middle of the century was particularly marked by the signature and aura of this artist, who during her lifetime was certainly the most exhibited and recognized, not only for her talent and virtuosity but also for her professional engagement.
Organised in four parts, the exhibition, “Laure Albin Guillot: The Question of Classicism” allows one to discover her art of portraiture and the nude, her active role in the advertising world, her printed work and, at last, a significant gathering of her “micrographies décoratives”, stupefying photographs of microscopic preparations that made her renown in 1931.

The exhibition presented at the Jeu de Paume gathers a significant collection of 200 original prints and books by Laure Albin Guillot, as well as magazines and documents of the period from public and private collections, such as the Parisienne de Photographie, the Musée National d’Art Moderne, the Bibliothèque Nationale de France, the Musée Nicéphore Niépce (Chalon-sur-Saône) and the Musée Français de la Photographie (Bièvres).
A large number of the original prints and documents on show come from the collections of the Agence Roger-Viollet, which acquired Laure Albin Guillot’s studio stock in 1964. This archive, which now belongs to the City of Paris, recently became accessible after a long inventory process. Made up of 52,000 negatives and 20,000 prints, this source has made it possible to question the œuvre and the place that the photographer really occupies in history.

The photographer’s work could appear as a counter-current to the French artistic scene of the 1920s to 40s, whose modernity and avant-garde production attract our attention and appeal to current tastes. It is however this photography, incarnating classicism and a certain “French style” that was widely celebrated at the time.
If Laure Albin Guillot’s photography was undeniably in vogue between the wars, her personality remains an enigma. Paradoxically, very little research has been carried out into the work and career of this artist. Her first works were seen in the salons and publications of the early 1920s, but it was essentially during the 1930s and 40s that Laure Albin Guillot, artist, professional and institutional figure, dominated the photographic arena. As an independent photographer, she practised several genres, including portraiture, the nude, landscape, still life and, to a lesser degree, documentary photography.
Technically unrivalled, she raised the practice to a certain elitism. A photographer of her epoch, she used the new means of distribution of the image to provide illustrations and advertising images for thepress and publishing industry.
She was notably one of the first in France to consider the decorative use of photography through her formal research into the infinitely tiny. With photomicrography, which she renamed “micrographie”, Laure Albin Guillot thus offfered new creative perspectives in the combination of art and science.
Finally, as member of the Société des artistes décorateurs, the Société Française de Photographie, director of photographic archives for the Direction générale des Beaux-Arts (forerunner of the Ministry of Culture) and first curator of the Cinémathèque nationale, president of the Union Féminine des Carrières Libérales, she emerges as one of the most active personalities and most aware of the photographic and cultural stakes of the period.