Paper Like Skin. Featuring approximately 45 works, the exhibition charts the artist's developmental arc from the late 1960s to the present and includes woodblock prints, etchings, and lithographs, in addition to a small selection of related sculptures in bronze and cast paper pulp, many of which will be on display for the first time. 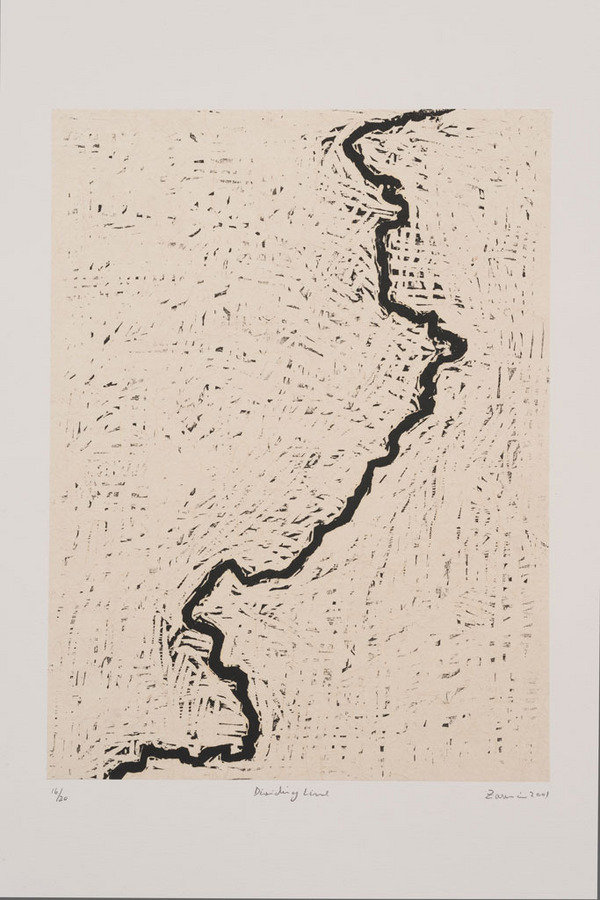 Zarina: Paper Like Skin, the first retrospective to explore the career of Indian-born American artist Zarina Hashmi, will be on view at the Solomon R. Guggenheim Museum from January 25 through April 21, 2013. Featuring approximately 45 works, the exhibition charts the artist’s developmental arc from the late 1960s to the present and includes woodblock prints, etchings, and lithographs, in addition to a small selection of related sculptures in bronze and cast paper pulp, many of which will be on display for the first time. The Guggenheim Museum’s recent acquisition—a suite of twenty works from a major series of pin drawings from 1975 to 1977—serves as a fulcrum for the presentation, which was conceived in close collaboration with the artist.

The exhibition has been curated by Allegra Pesenti, Curator, Grunwald Center for the Graphic Arts, Hammer Museum, where it opened in September 2012. The Guggenheim presentation is organized by Sandhini Poddar, former Associate Curator of Asian Art, with Helen Hsu, Assistant Curator, Solomon R. Guggenheim Museum.

Established as a printmaker, Zarina, who prefers to use her first name only, also considers herself to be a sculptor, in part because her works often begin with the activity of carving blocks of wood. Paper is central to her practice, both as a surface to print on and as a material with its own properties and history. Zarina’s visual vocabulary is minimal, yet rich in associations with her life and themes of displacement and exile, memory and nostalgia. The concept of home—whether personal, geographic, national, spiritual, or familial—resonates throughout her oeuvre.

While Zarina’s work has roots in abstraction, it has always been informed by a profound sociopolitical awareness. Born in the northern Indian city of Aligarh in 1937, Zarina has spent nearly her entire adult life outside of her native country. The border between India and Pakistan that was demarcated by the 1947 partition caused the displacement and death of millions of people, and eventually forced Zarina’s family to leave their home in 1959. Since then, her visits to India have not been simple homecomings. In 1958, she began a life abroad, relocating to different cities around the world, including Bangkok, New Delhi, Paris, Bonn, Tokyo, Los Angeles, and Santa Cruz, though she has primarily lived in New York since 1976. Paper has been a transportable medium for the artist, readily available wherever her travels have taken her.

Zarina’s earliest works demonstrate a formal immersion in the possibilities of the medium and a commitment to Minimalism and abstraction. Her mature works display interventions on paper that are at once fierce and delicate; she pierces, folds, scratches, and cuts monochromatic grounds, creating textured surfaces that invite intimate viewing and extended contemplation. The artist emphasizes the sculptural sensibility that underlies printmaking, found in the act of carving a woodblock or assembling a relief collage. In the 1980s, she literalized this interest by casting three-dimensional works with paper pulp. These forms would lead to sculptures in bronze. As with her prints, these works were inspired by organic sources, especially plants, and the regular geometries of architecture. Zarina often uses handmade paper from India, Japan, or Nepal—artisanal varieties with various textures, luminosities, and degrees of ink absorption, providing a wide spectrum of grounds. Paper is also allied with literary tradition. Profoundly influenced and inspired by Urdu poetry, literature, and calligraphy, Zarina embeds her work with evocative quotations and references.

Her most recent works are imbued with a meditative spirituality. She has made a series of sculptures based on strands of Muslim prayer beads. She increasingly incorporates luminous elements like gold and obsidian into her compositions. In paper works, she employs single sheets rising 6 feet tall. With sculptural tasbihs, precious materials, and augmented scale, Zarina directs the viewer’s mind to ideas of nothingness and infinity, encumbrance and enlightenment, eternity and nevermore. Zarina: Paper Like Skin encompasses autobiographical topographies of distances traveled and time spent, presenting works that superimpose historical events and personal experience by way of the elusive, ineffable yet essential idea of home.

Zarina: Paper Like Skin was organized by the Hammer Museum, Los Angeles.

The presentation at the Solomon R. Guggenheim Museum is supported in part by the LLWW Foundation and the Leadership Committee for Zarina: Paper Like Skin, with special thanks to Luhring Augustine, New York.

The Elaine Terner Cooper Education Fund
Conversations with Contemporary Artists
Zarina
Friday, March 1, 6:30 pm
Zarina Hashmi discusses her artistic practice with Andreas Huyssen, Villard Professor of German and Comparative Literature, Columbia University, on the occasion of her retrospective Zarina: Paper Like Skin.
$12, $8 members, free for students with a valid ID and an advance RSVP at guggenheim.org/publicprograms.

Film Screenings
In conjunction with the exhibition Zarina: Paper Like Skin, the first major exploration of the Indian-born American artist’s career, the Guggenheim is pleased to screen two significant feature-length films chosen by Zarina. These selections explore the complex sociopolitical histories of the Indian subcontinent through intimate individual dramas, reflective of the artist’s interest in the concept of home, whether personal, national, or familial.

For complete information about the range of public programs presented this spring, visit guggenheim.org/publicprograms.